In which our heroine rides to another swath of weird and unusual destinations, in pursuit of fake internet points. 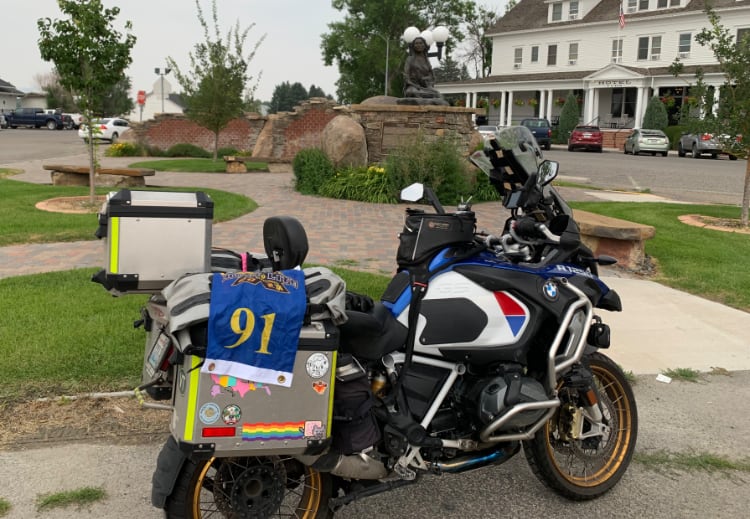 The Corps of Discovery arrived at the Missouri River headwaters on July 27, 1805, and camped about three miles from this site.This statue was erected to commemorate Sacajawea and the bicentennial of the Lewis and Clark Expedition. As a member of the Corps, Sacajawea was invaluable as an interpreter and guide.

Take a photo of the statue of Sacajawea and child titled Coming Home. 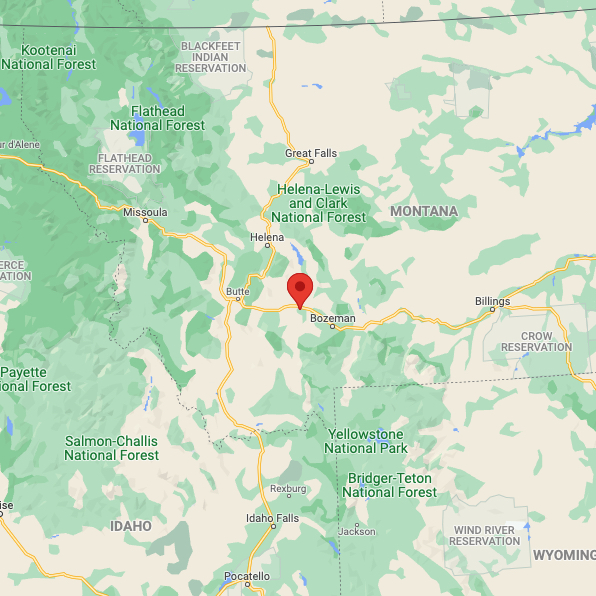 I love the saga of the Lewis and Clark Expedition, and the role of Sacajawea in saving the Corps of Discovery on numerous occasions simply can’t be over-emphasized.

The three rivers - Jefferson, Madison, and Gallatin - converge here. Three Forks is the official headwaters of the Missouri River, the longest river in the United States. 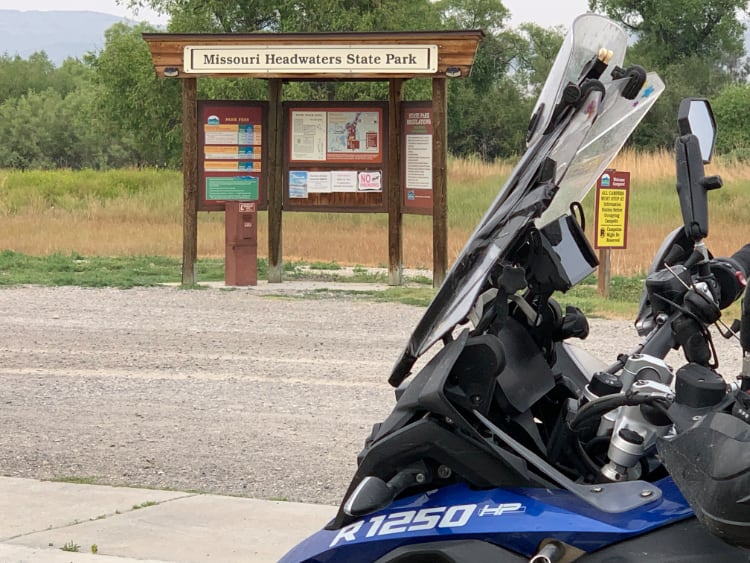 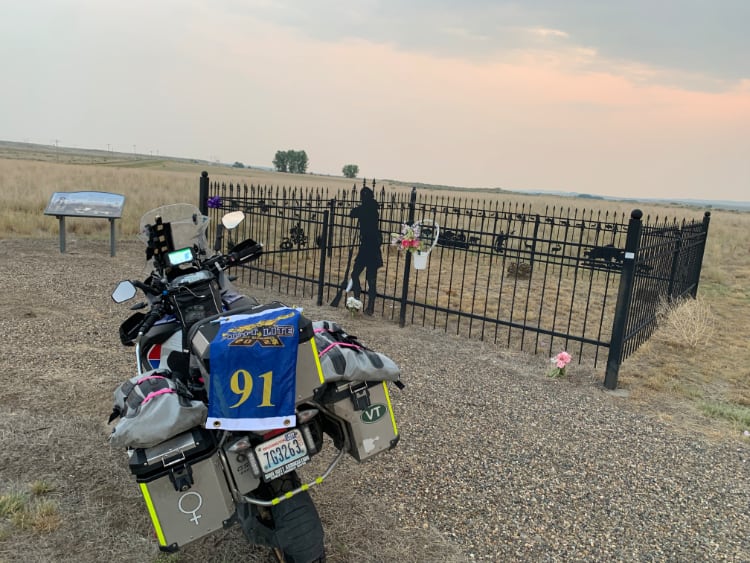 Behind this fence lies the remains of six men purported to be buffalo hunters. Drawn from the fringes of the American frontier, their identities can no longer be verified. One is said to have been killed by Indians in 1878, another was killed in a fight in 1880 at the Foley Roadhouse. According to the interpretive sign next to the fence titled Buffalo Hunters - Symbols of a Frontier Era, who shot two inmates in the Terry city jail in 1917? 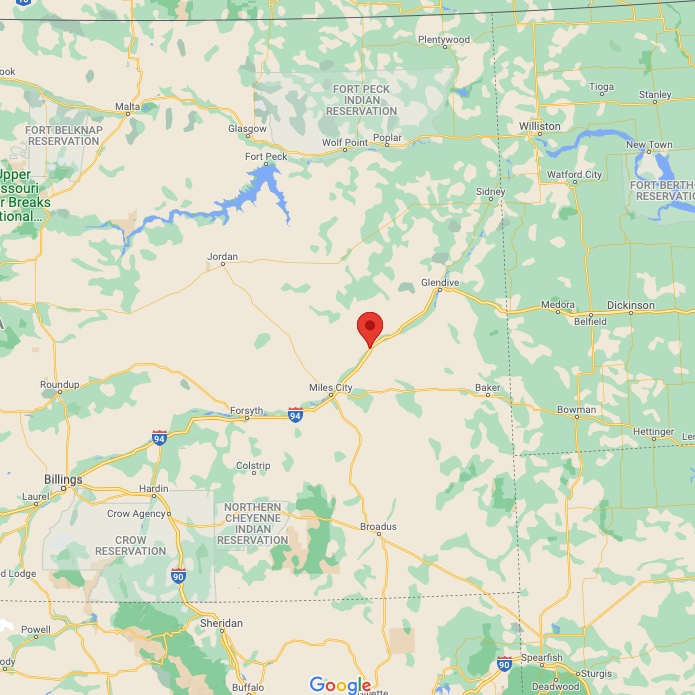 After a brief, smokey stop at Pompey’s Pillar NM - one of the smallest national monuments, and another popular stop for anyone retracing the steps of the Corps of Discovery - the quiet, rural graveyard overlooking the meandering Yellowstone River was a welcome break for a few moments of reflection. 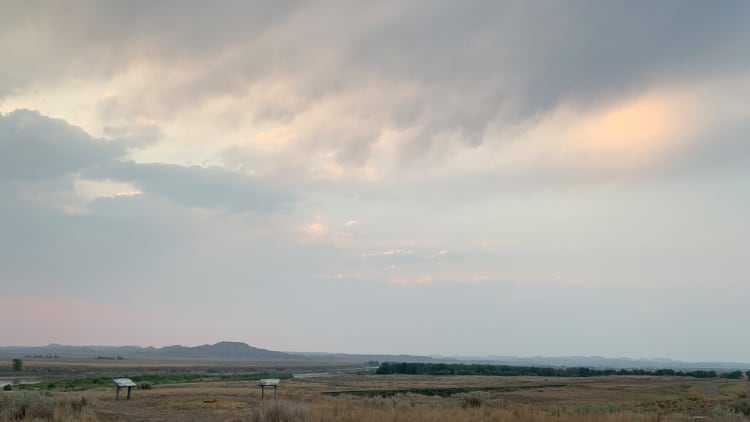 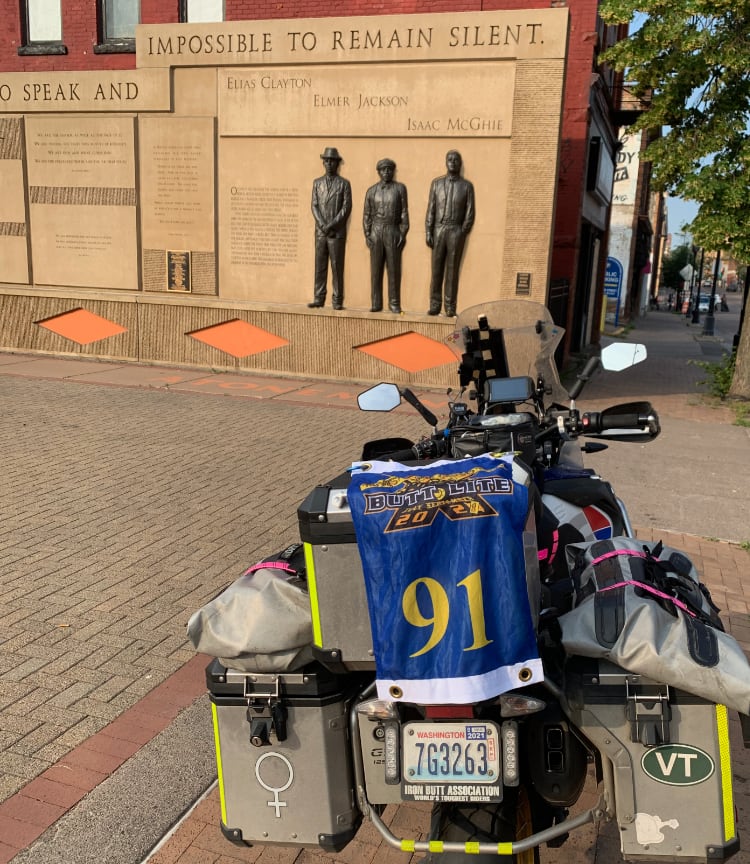 On June 15, 1920, three African-American circus workers, Elias Clayton, Elmer Jackson, and Isaac McGhie, were attacked and lynched by a mob here in Duluth. Rumors had circulated about a white teenage girl allegedly raped by six African-Americans; a physician’s examination of the girl found no evidence of rape or assault. The killings shocked the country, particularly for their occurrence in the northern part of the United States, although four earlier lynchings had already taken place in Minnesota. No one was ever punished for the crime.

Take a photo of the Clayton-Jackson-McGhie Memorial which shows the black silhouettes of the three men on the wall that makes up part of the larger memorial. 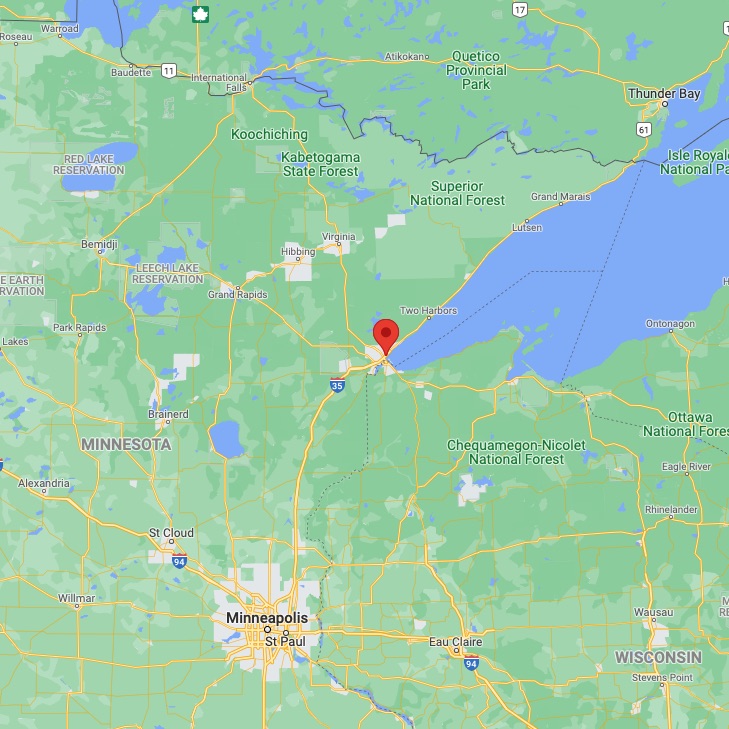 Jo and I split up in Fargo the day before, and I buzzed across northern Minnesota, which reminded me so much of Maine or upstate Vermont/NH, endless lakes, swamps, deer, moose… Spent the night in Duluth, combining the bonus stop with a visit to Aerostich to put in an order. I ate breakfast at a local diner, and the waitress asked if I was in town to visit Aerostich, so I guess I picked the popular stop?

The monument and its plaza were a quiet little stop. A little rain had fallen, so I pulled up onto the sidewalk to get off the slippery brick street to snap my flag photo. I took a few more photos of the memorial, trying not to disturb the folks who were sleeping rough along the base of it; they were having a hard enough day without me disrupting them.

Duluth itself felt kind of rundown and mothballed, like so many mill towns in the east did before the old industrial buildings were reclaimed for small businesses and apartments. The architecture of brick and stone was lovely, and the people friendly, a chill sort of vibe everywhere I went. The city seems to defiantly be waiting for something, as if it’s missing residents have just stepped out on a short break and will be back any minute now.. 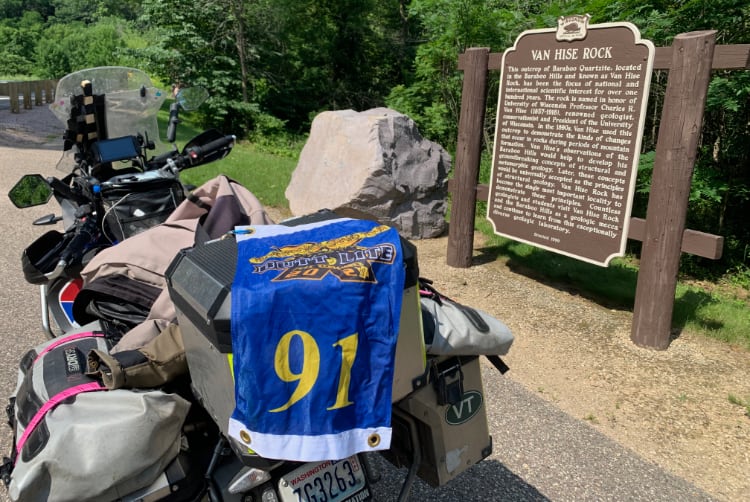 This outcrop of Baraboo quartzite has been the focus of international scientific interest for over 100 years and is named in honor of University of Wisconsin Professor Charles Van Hise. In the 1890s, Van Hise used this outcrop to demonstrate the kinds of changes that occur in rocks during periods of mountain formation. Geologists and students continue to visit this geological Mecca.

Take a photo of the plaque attached to the large rock which shows that Van Hise Rock has been designated a National Historic Landmark. 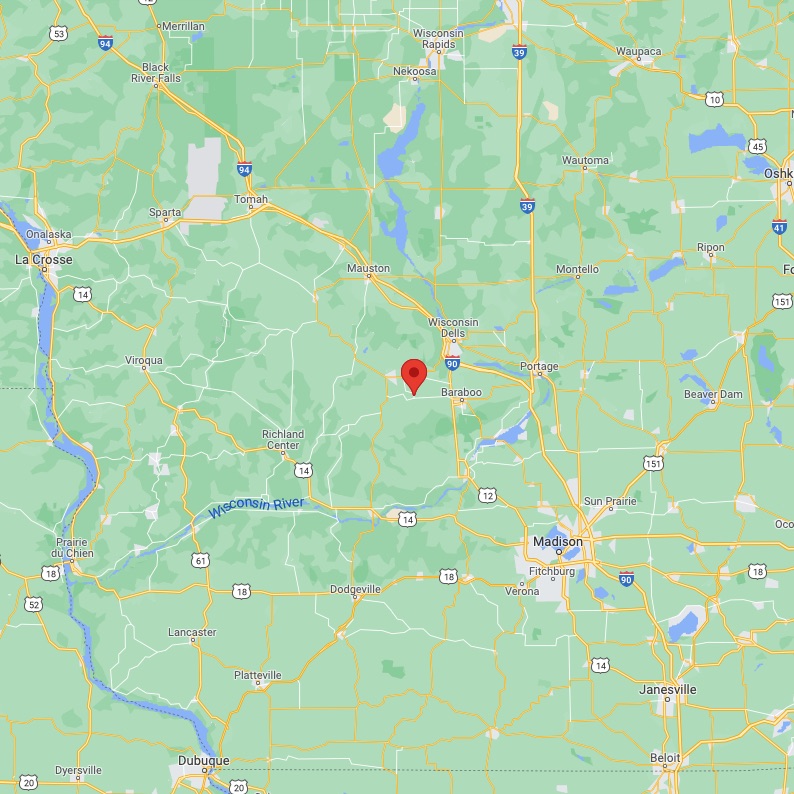 I really love this part of Wisconsin, having spent so much time in Madison over the years. This bonus location was a tiny bit problematic, just finding a place to park at first; as promised, this is a mecca for geology folks, and a passenger van of students and a half-dozen cars filled the tiny lot. Once they left, I got in position but then… hang on, I’m looking for a PLAQUE? Looks like someone yoinked it at some point in the last few years, so I took a number of additional establishing photos, and then wandered around looking for a bit. I did find this other plaque attached to the backside of the rock, but of course that plaque doesn’t say a thing about being designated a National Historic Landmark, so… 🤞🏼 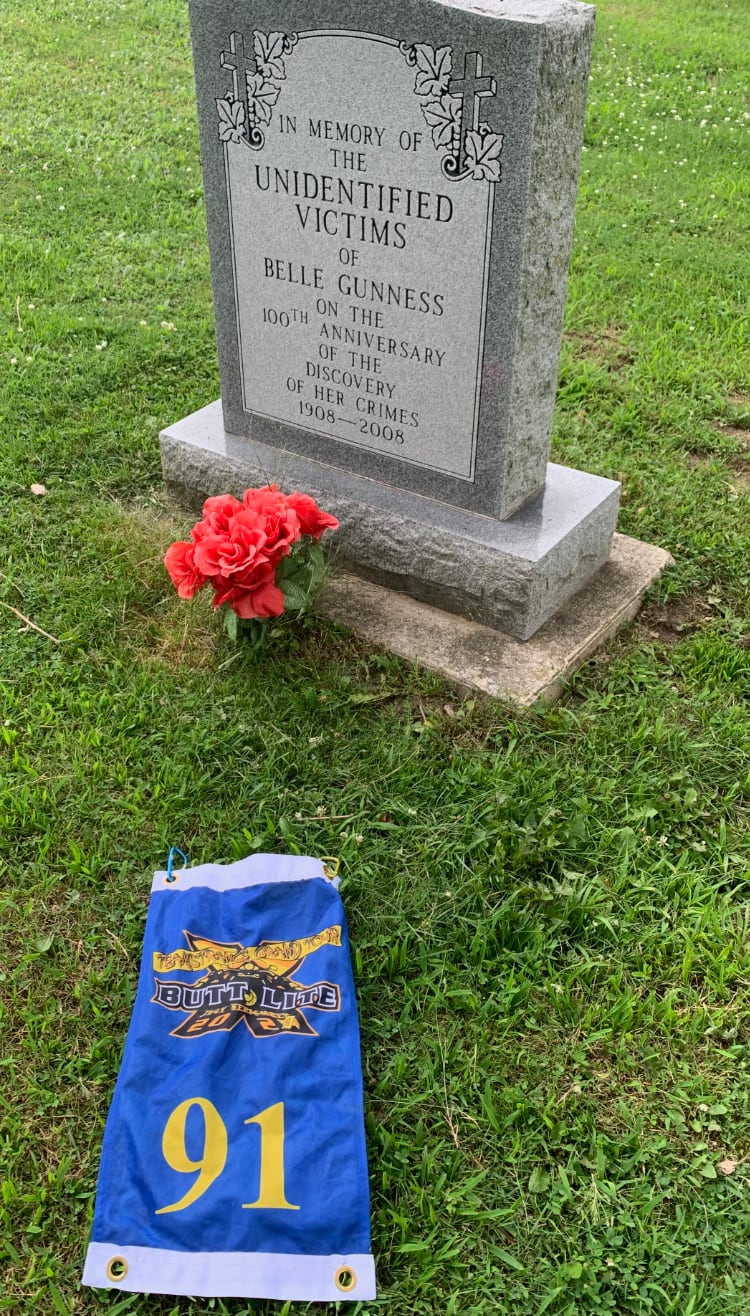 Belle Gunness was a Norwegian immigrant who, between 1884 and 1908, killed between 25 and 40 people, including both her husbands and all of her children. She would advertise in Midwestern newspapers as a widow looking for a husband. Lonely men would show up at her farm near LaPorte with their life savings, only to be murdered, fed to the hogs, and buried around the farm. When the brother of her last suitor raised suspicion, she withdrew all her money from the bank, burned down the farmhouse which contained the corpses of her three foster children and a headless woman, later identified to not be Gunness, and framed her handyman for the murders and arson. Most of the remains found on the property were buried in the county cemetery. In 2008, local history fans erected monuments to her victims at the county cemetery (now Pine Lake Cemetery) and Patton Cemetery (where her husband, daughter and last victim are buried). 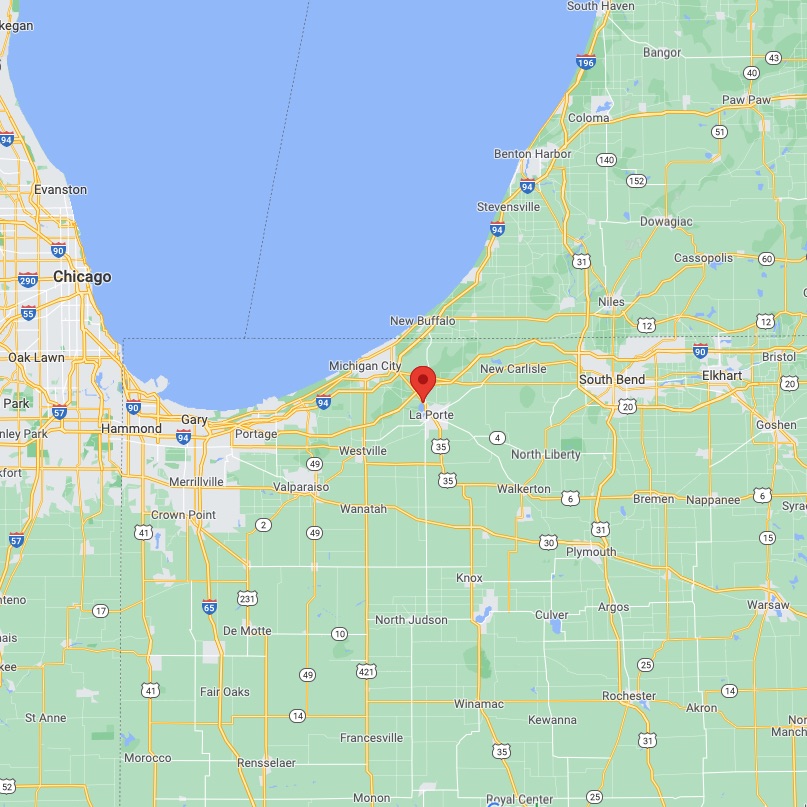 Ended up visiting a lot of graveyards tracking down bonuses this year, and I’m always struck at how little context a grave marker gives you. All it lists are the names and dates, and very little about the reasons why. I think that it’s sad how little attention we give to our local histories; even the tragedies and monsters are stories we should be preserving. 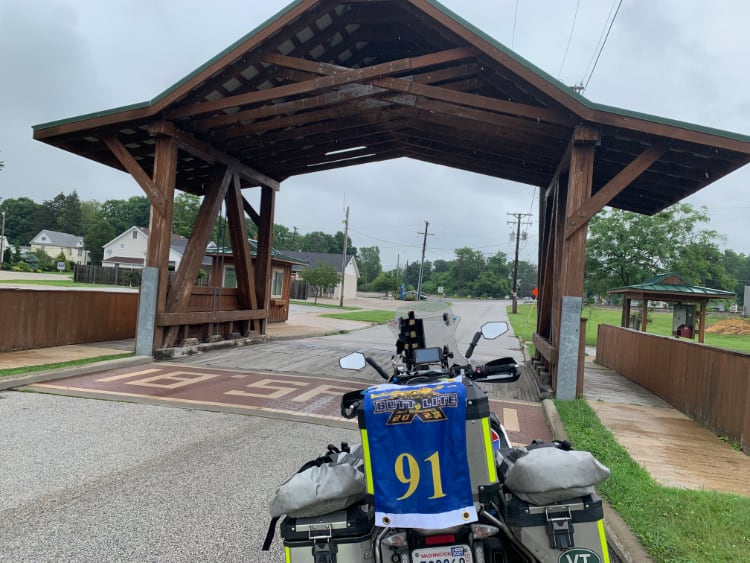 The Liberty Street Bridge in Geneva is the world’s shortest covered bridge, at 18 feet. The bridge crosses Cowles Creek and can be driven over by car. 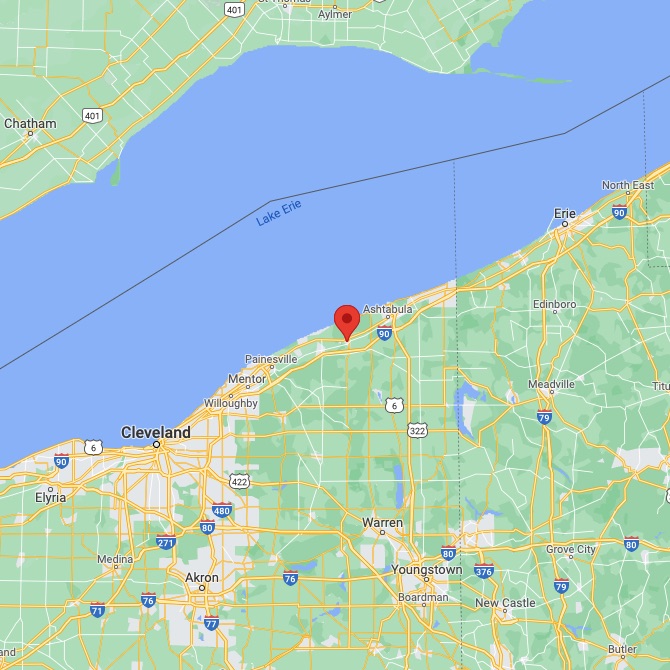 Growing up in the land of covered bridges (Vermont) I giggled a little to visit the shortest one in the world. I rounded it out by visiting the longest covered bridge in the United States (at least, until 2008!) when I got home. 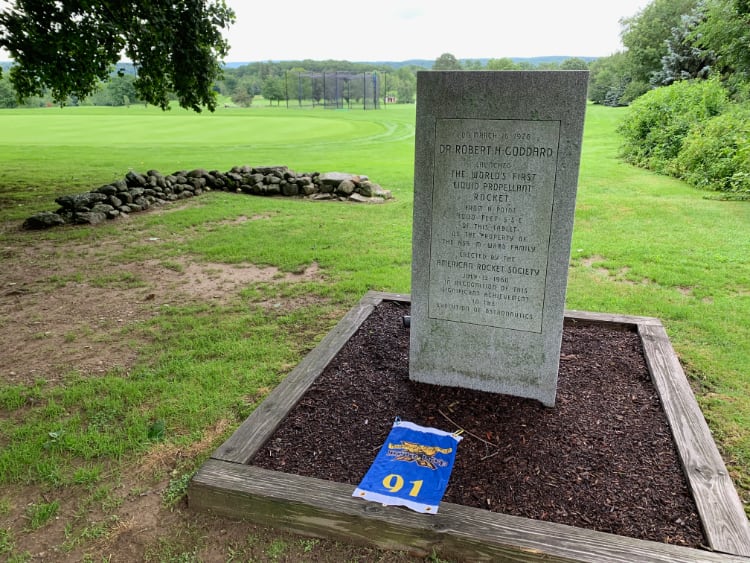 In 1926, Dr. Robert Goddard launched the first successful liquid-fueled rocket from this approximate site. Forty-three years later, humans rode liquid-fueled rockets to the moon. The landing site for Goddard’s rocket is marked by a small obelisk at the far end of the stone wall, between the 1st and 9th fairways.

Take a photo of the upright granite marker erected by the American Rocket Society to commemorate Goddard’s launch. 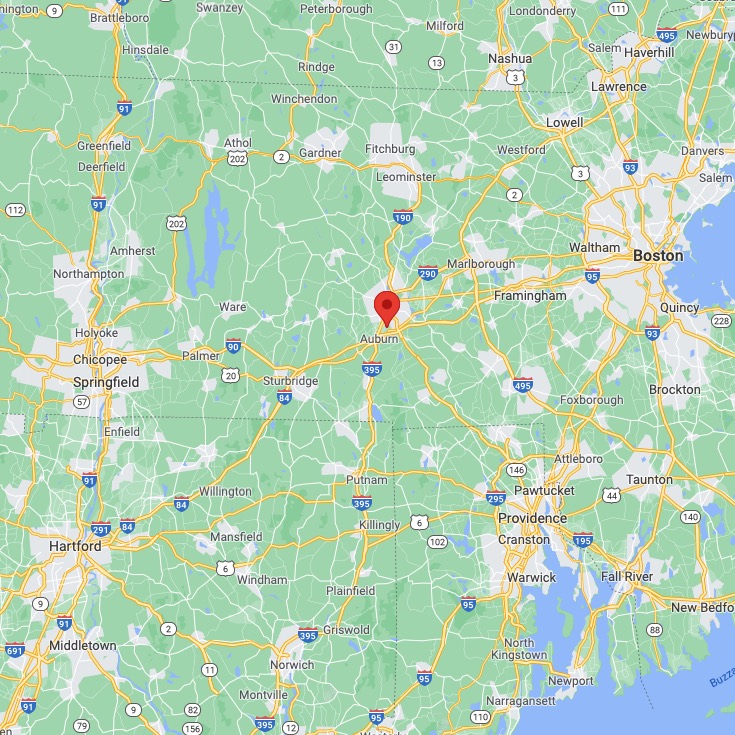 I kind of wanted to tromp down the hill to the landing site, but we had a few other stops to make today, including National Park stamps in Rhode Island, Connecticut, and Massachusetts, so were on a bit of a clock.