Part 3.. in which I learn a lot about kart racing.. 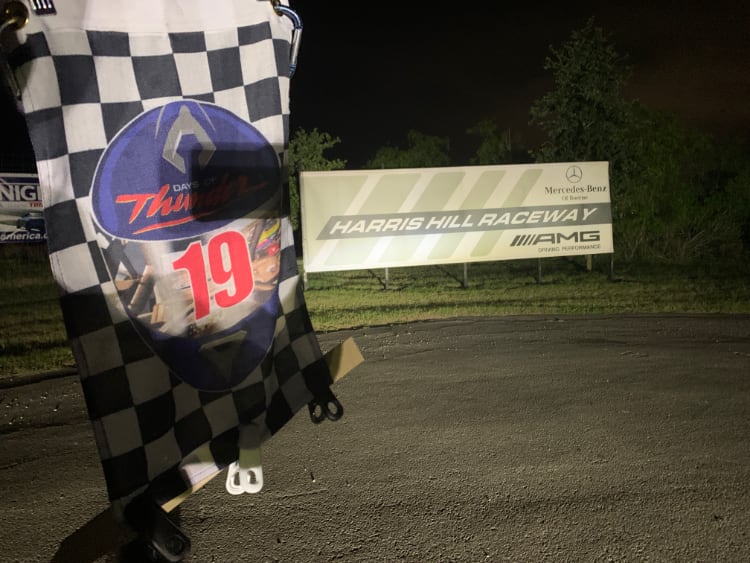 Yawwwwwnnnn.. I’m surprisingly sleepy this morning. Something about this stop made me think that security was going to come swooping down at me any minute. 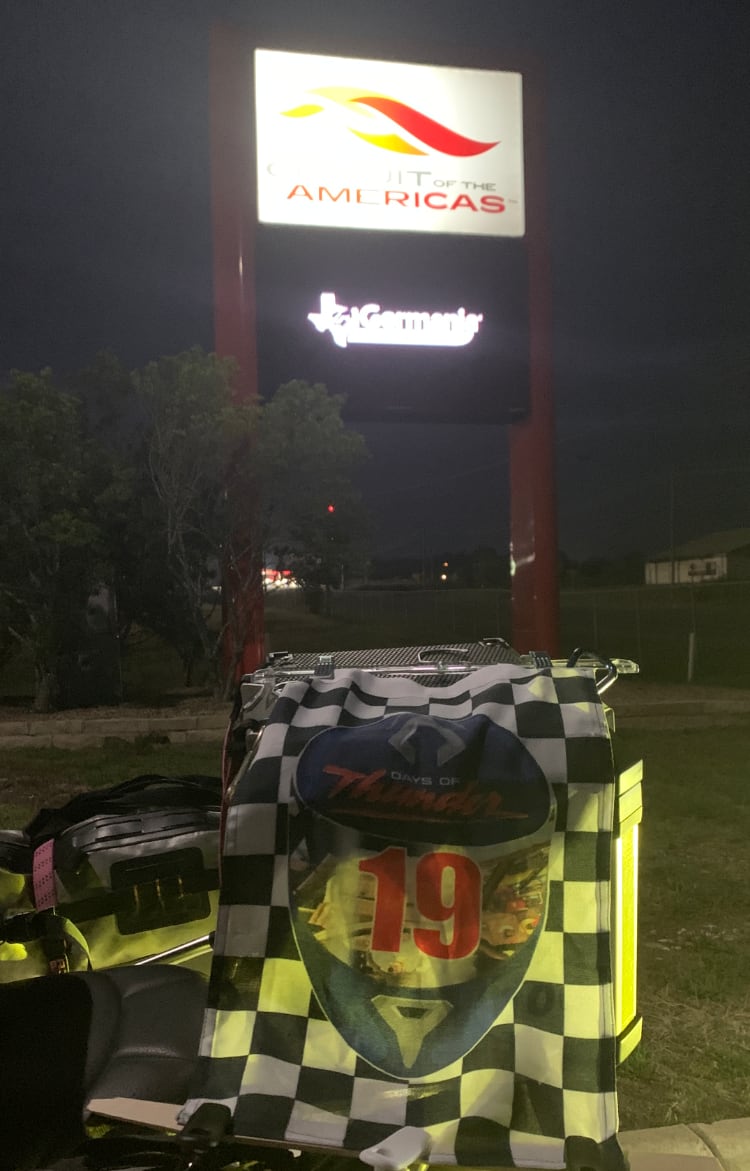 Waze decided I needed to roll through a suburban housing development as a “short cut” so I tried to keep the engine quiet as I rolled through speed bumps and dodged children’s toys left in the street from playing under the street lamps last night.

I’ve spent so much time in and around Austin that I’ve certain been past the Circuit of the Americas, but I’ve never gone to any events there. Does this count?

I ran into Rob Griffith there, and he and I would bump into each other a few other times today; fairly common when you’re coming back into a rally checkpoint towards the end of a leg, as there’s fewer places to go, and everyone is swooping up the close-in points. 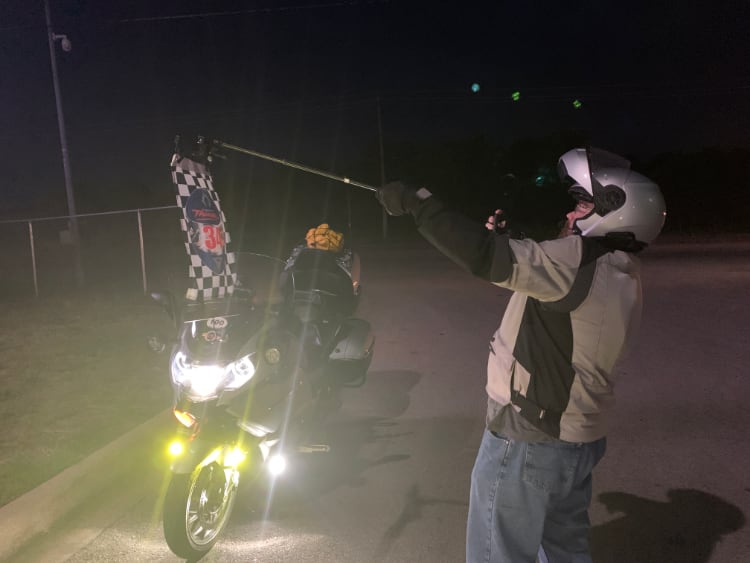 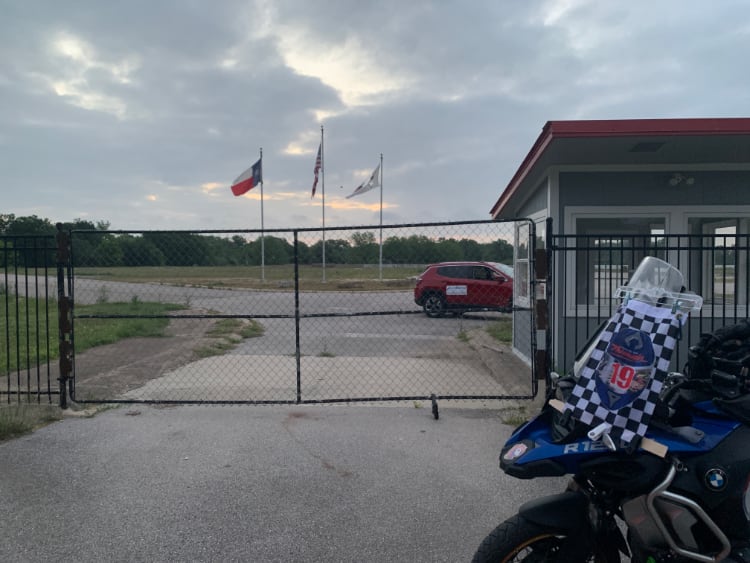 Still a bit sleepy, I missed my turn and Wave and Garmin started fighting about which ridiculously long u-turn route would be best.. when it was super easy to just get off the next exit and loop back to the missed exit… weird behavior!

Getting to this track, you have to navigate what looks like an unused access road through some folks back yards, and once there, the lack of signage and some guys sitting in a minivan just watching you made me feel like Rob (who was already there..) and I were interrupting a real-life episode of Breaking Bad. 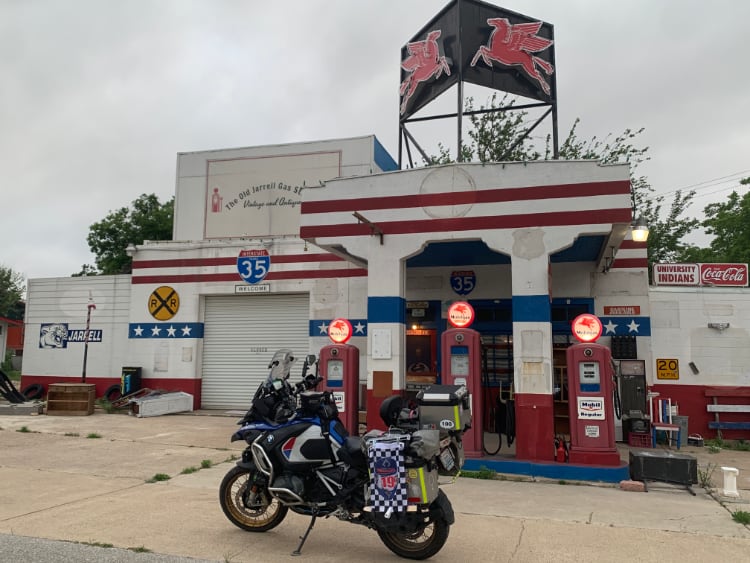 Heading north now, Texans starting to wake up, I-35 getting full. Jarrell was sleepy, and I had the bonus by the highway all to myself. I added it to my Things To See for next time I’m in Texas with free time on my hands. 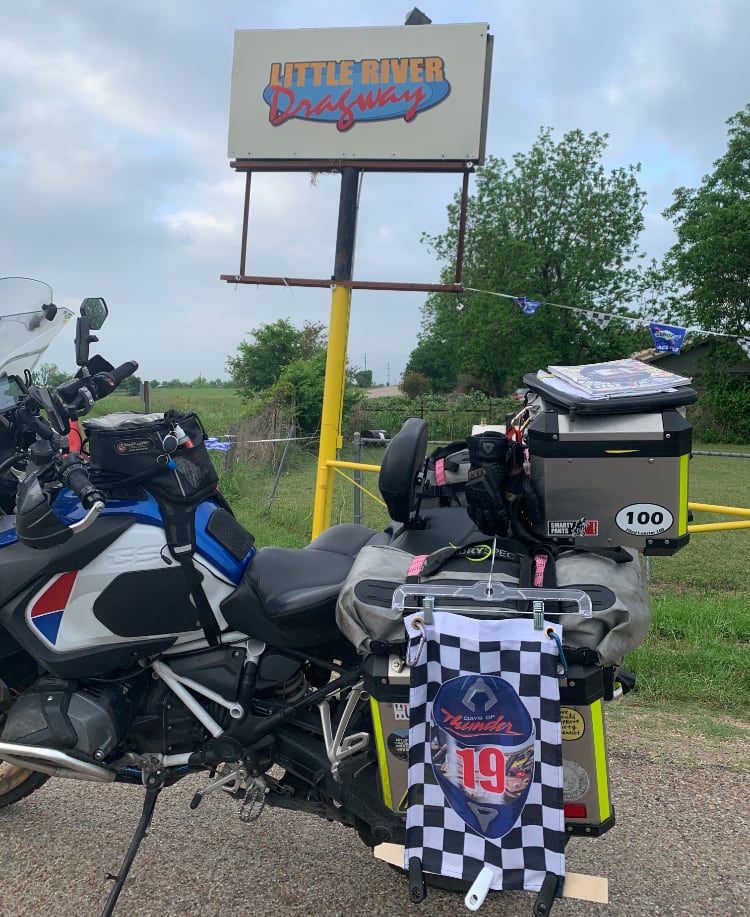 I needed to pee really bad, so I was glad to see another porta-potty available. Thanks, Little River Dragway! Much obliged… 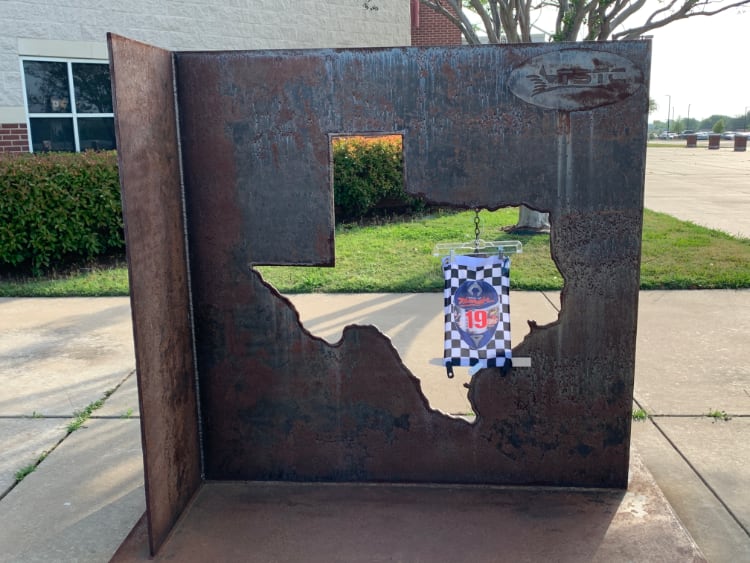 How could we have a rally called “Heart of Texas” and not visit its namesake? Had a little trouble finding the right driveway/parking lot combination, but the bonus was easy enough to spot once inside the complex. 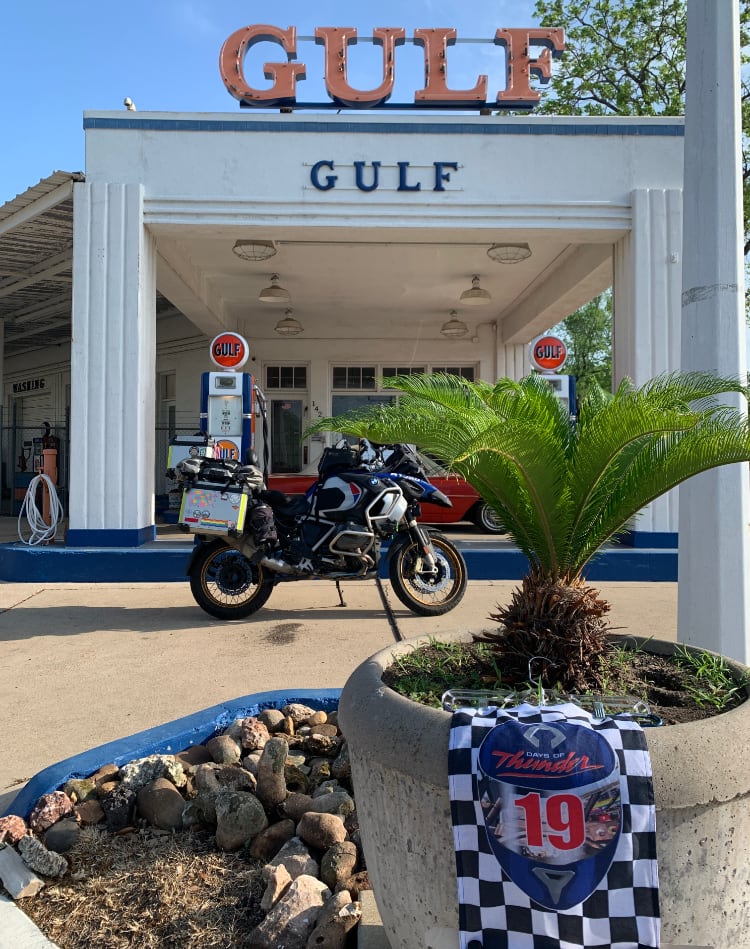 Some kind of marathon was happening, and lots of side streets were blocked off, police redirecting traffic and holding us up to allow runners through. No sweat, though, and soon I was at this gorgeous restored station. Looking at other finishers photos after the event, it seems those of us who went here all tried to take a few sexy photos of our bikes with this station as the backdrop. 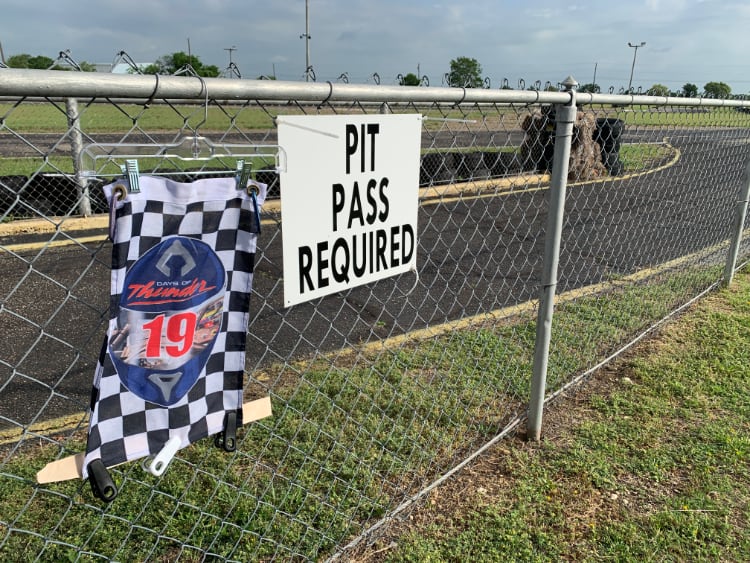 More detours this time from the marathon (or whatever it was..) so I had to backtrack and go around, taking a few more miles than strictly required. When I pulled in, I realized there was no easy way to get a photo that would match the sample photo from the rallybook, due to a padlocked gate. I was trying to figure out the best angle of attack to at least capture the spirit of the sample photo when Rob pulled up, and we wandered around for a minute or two when a pickup truck pulled up. Out hopped the manager/owner/caretaker of the track, wondering what in tarnation all these motorcycle riders were doing at his track!

Once we explained what on earth we were doing, he got real chatty, unlocking the gate and letting us get the best angle possible while giving us the entire history of the park, some of the technical details around karting, etc. We made polite conversation but at some point I just started packing up the bike because I gotta go go go! 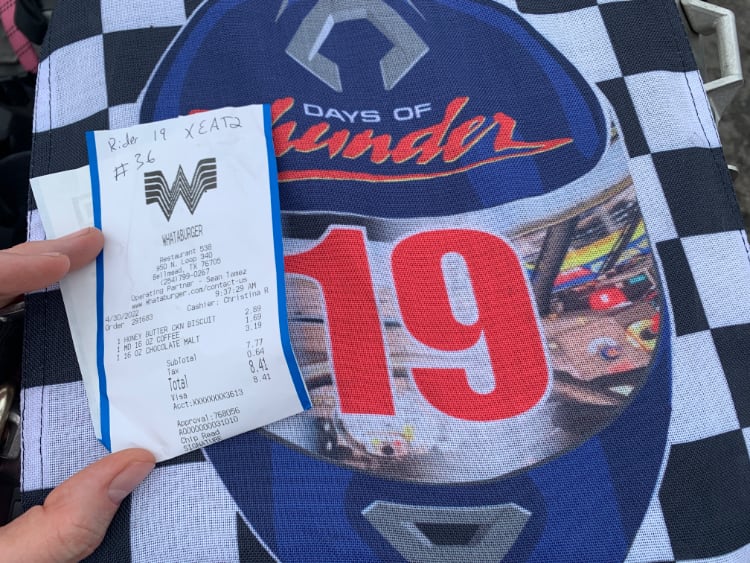 I make no apologies for having a honey chicken biscuit and a chocolate malt for breakfast.

Had a lovely parking lot chat with a 7-year old girl who loved my stickers.. I swear I get at least one young kid come up to me during every rally or big ride. It makes my day every time it happens! 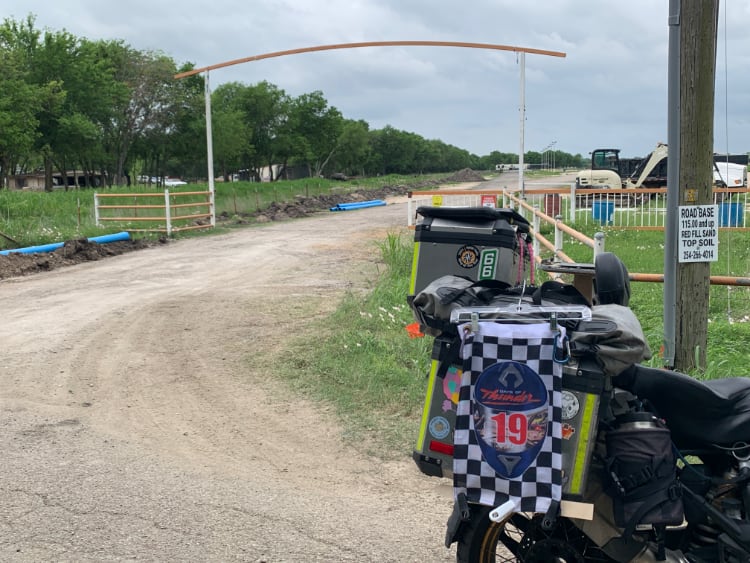 This defunct track is not long for this world. The remaining signage is completely removed, and it looks like a housing development is underway. It was only a short hop away, but it took forever to get out of the Whataburger parking lot, because I was stuck behind 3 cars who stubbornly were waiting for a break in traffic to make a left turn. 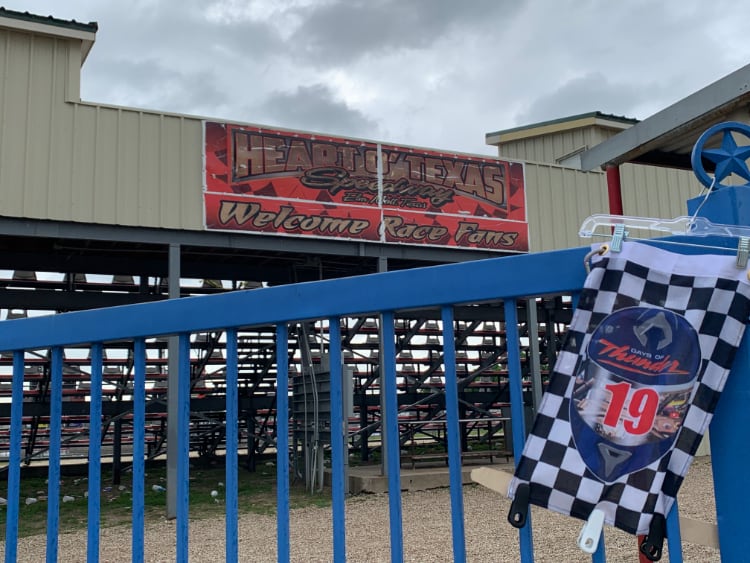 I pulled in, snapped my photo, and while I was doing paperwork, Ben Ernst roared in with a cloud of dust. He was off his bike, photo snapped, back on the bike and gone before the dust even had a chance to settle. I was so proud of my 3-4 minute stops, and I just got shown. 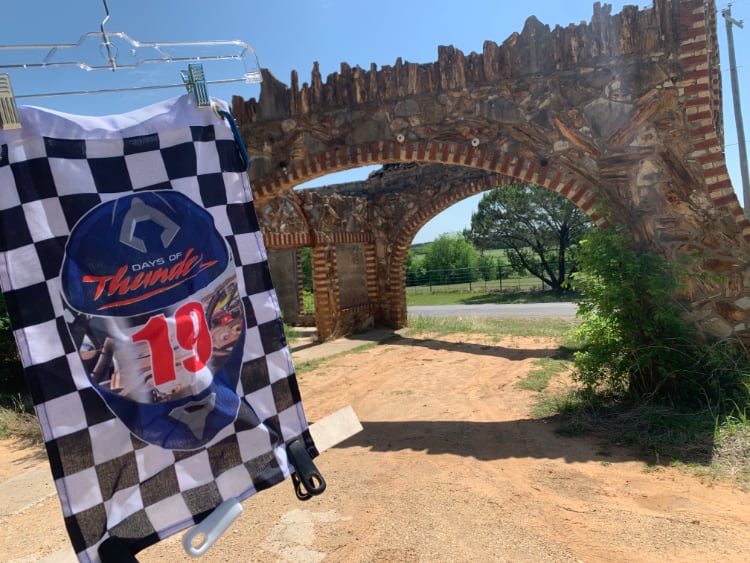 Glenrose was having some kind of art festival or something, so I was careful picking my way on it’s small 1-stoplight main street. Gave me plenty of time to notice all the buildings made of petrified wood, but even that didn’t prepare me for this particular building (or more accurately, “ruin”). Possibly my favorite stop on the whole rally! The small dirt driveway was washed out and rutted, but I’m on a GSA so TALLY-HO! I tried chatting with a couple other riders who stopped here, but I didn’t recognize them and they didn’t seem interested in being chatty, so I moved on. 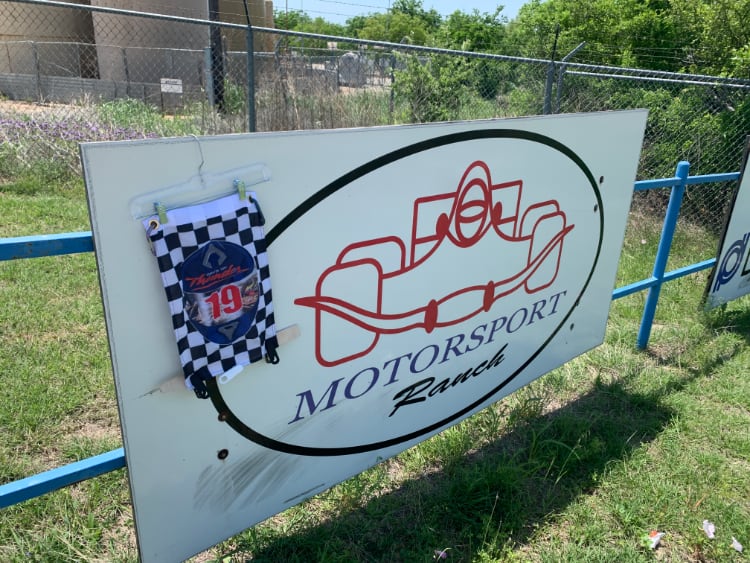 A busy spot, but had a gas station right by the entrance so I gassed up and used the restroom, then back out to take photos. A huge thanks to every single person on a sport bike, expensive car, or something expensive on a trailer who stopped to make sure I was ok! 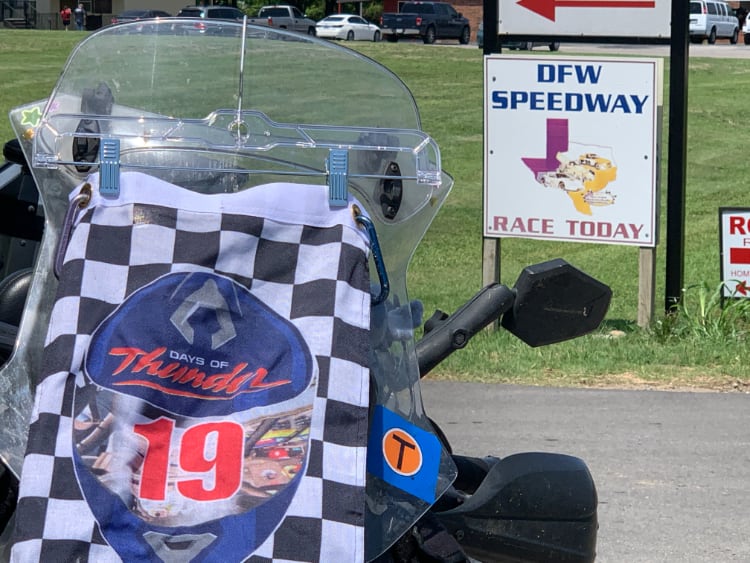 Every rally has a handful of stops that I have no memory of. This is one of them. It’s a bit spooky, knowing for a fact that I went someplace, but no amount of photos, satellite tracker pings, or Google Street View can jog my memory here. 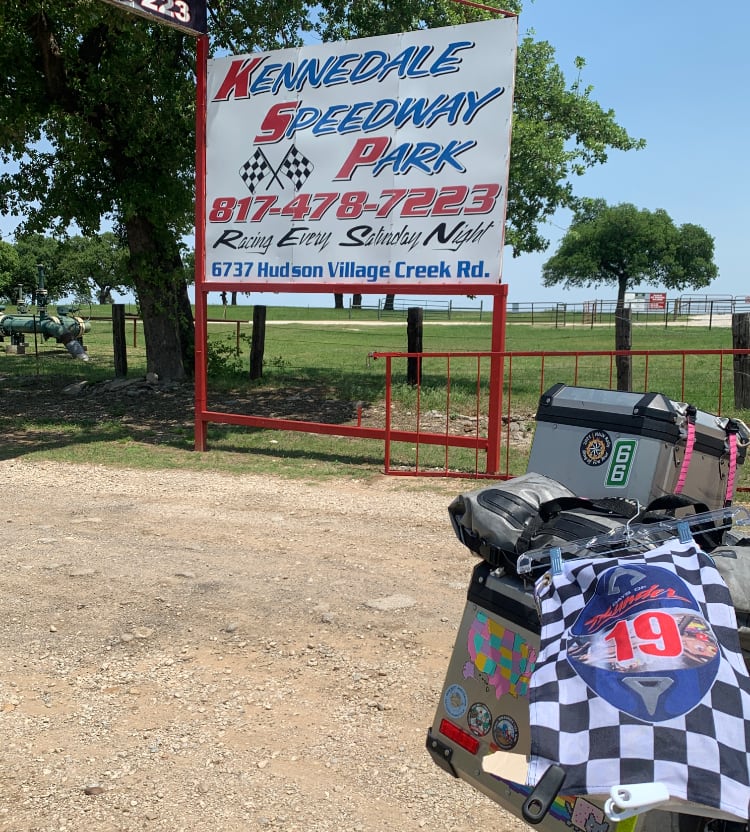 I buzzed down the country lanes to this location, getting a wave from another rally rider. There was a small landscaping team mowing the lawns here, who, like most people at a bonus stop, seem perplexed at the weirdo who has raced up, taken a photo, and roared off into the distance.

I noticed at this stop I was moving a lot more slowly.. I think I had a plan, everything was working, I was tracking ok… why press? 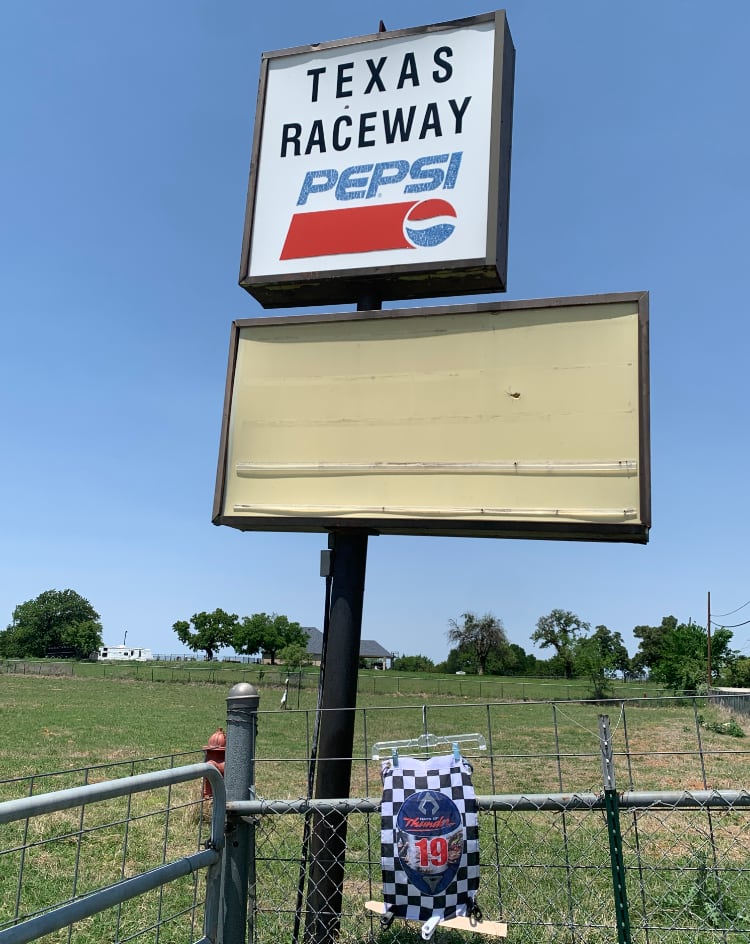 This sign is right across the street from a very posh McMansion; I felt very little issue parking in their secondary driveway, as the actual entryway for the track was washed out. 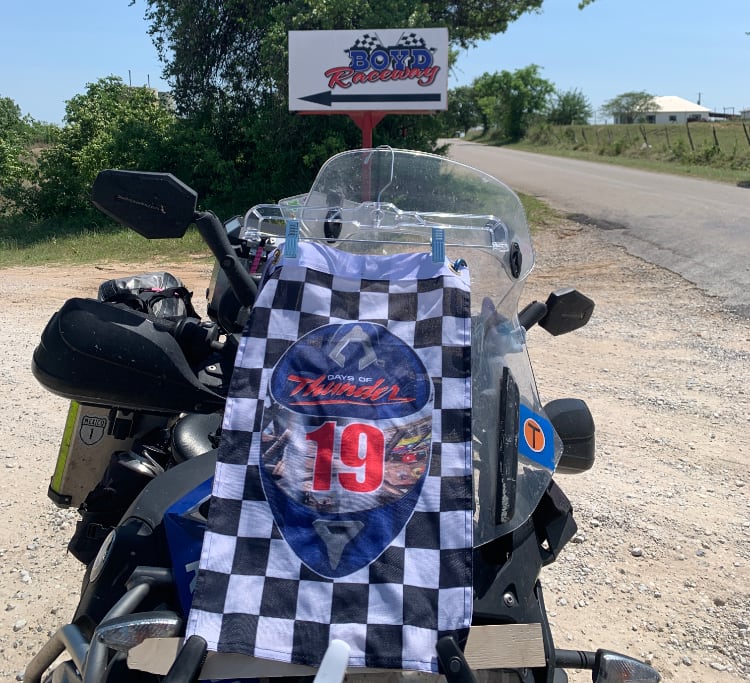 I was definitely getting tired and dehydrated, as my frustration level about traffic was spiking; getting angry is a sure sign that something is off. I got off the bike here and found some shade, trying not to obsess about how much time I’d been wasting so far on this rally. I drank some gatorade, add some peanuts, and peed in the bushes before continuing on.. not much further to go! Get it done, then figure it out. 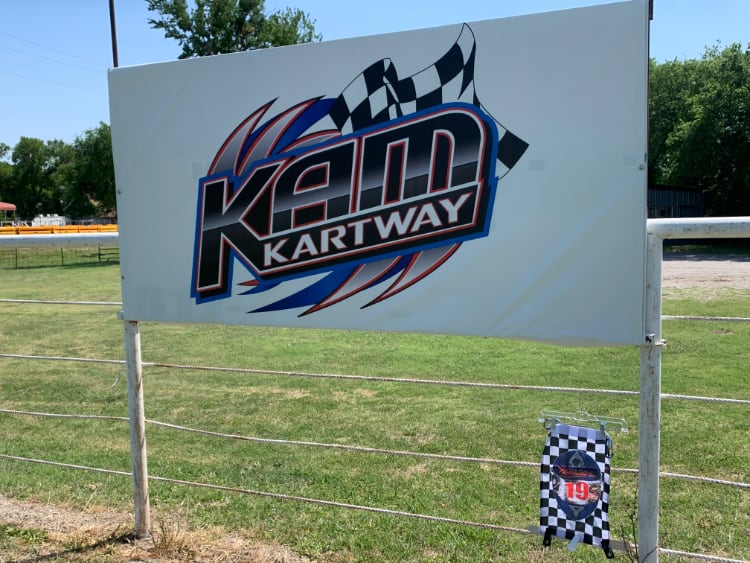 Wait for another train? Sure, why not.. I got time.

Pulled into the gravel driveway/parking lot of this track, looking for a place to park. Their sign was up by the road along their fence, with no safe place to park off the road.. after I took the photo, I noticed a side-by-side ripping fast across the property, coming to a stop with a skid by my bike. I waved and smiled and quickly disarmed the disgruntled owner, who was upset that someone was taking a photo of his track, but chilled out when I explained the rally to him. Apparently other riders had been pulling up all day, but no one took the time to even say hello.. 😕 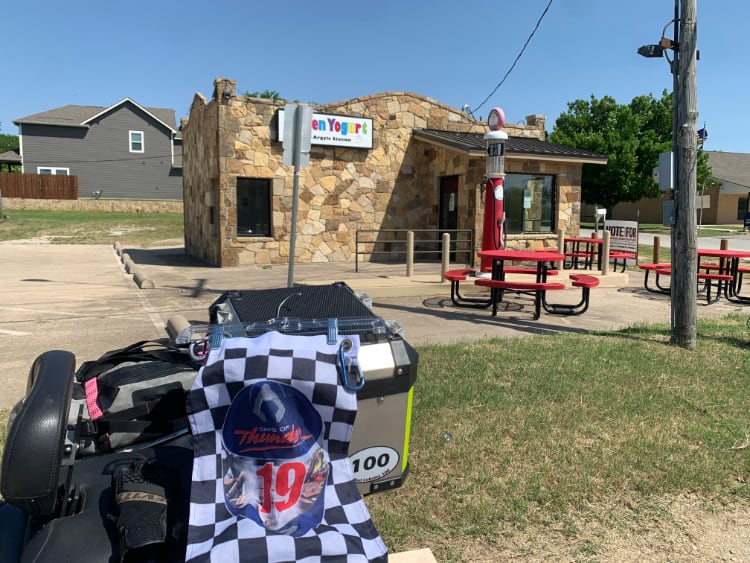 I was definitely ready for a nap or a bite to eat, as I was tempted by the froyo.. but no, no I must continue on! Only 2 more stops! 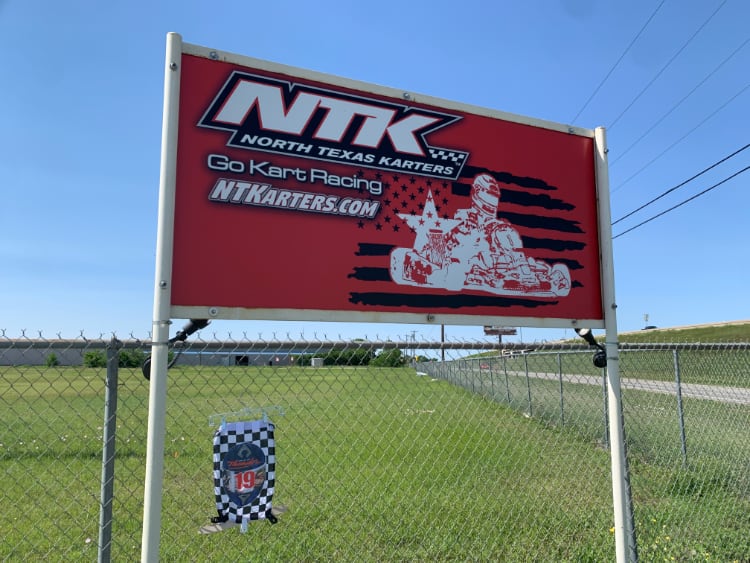 I had plenty of time, but still, the traffic jam of Denton stressed me out. I danced and weaved and did my best “asshole from California” impression to escape the worst of it. 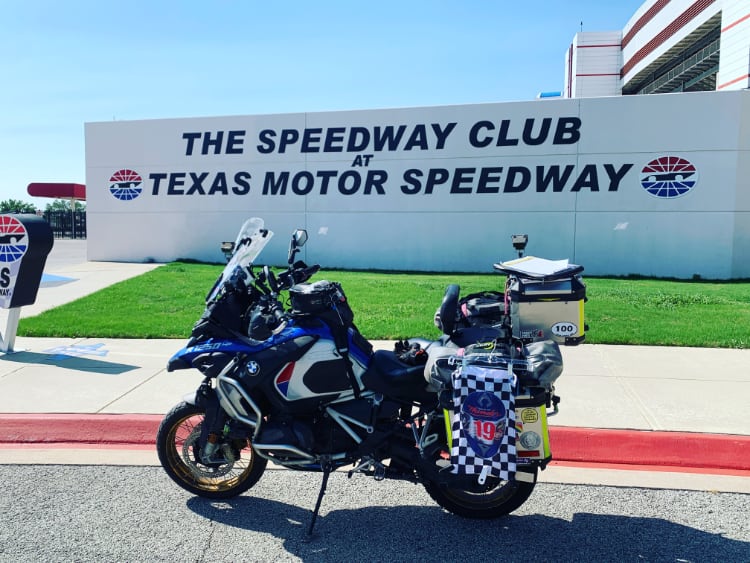 Approaching from the north, it just looms like a painted backdrop in an old movie; there’s no way something that large can possibly be real!

It took a little riding around the massive, empty parking lots to find the specific bonus location, and I got the feeling that security was going to shout at me for stopping by the sign, but it was an incident-free stop. As I was leaving, I saw a couple other rally riders racing in; plenty of time, lads, plenty of time…

And back to the barn… 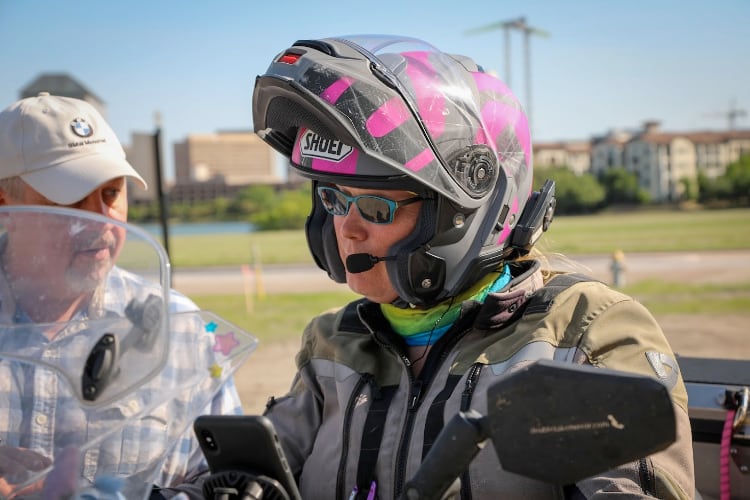 I turned the bike east again, and headed to the finish hotel. Traffic was heavy but manageable, and the only real thing of note was seeing another rider stopped a few miles short of the hotel, but they already had someone else stopped helping them, so I rolled on. We’d been warned of traffic detours around the hotel due to a triathlon, but there was little sign of it, so I rolled right into the checkin spot, where I stopped the clock with 25-odd minutes left; plenty of time!

I parked and wandered in to learn my fate…

Onward to the thrilling conclusion ➡️