December and January were miserable months in Seattle, frequent snow and deep freezes courtesy of strong winds from the Frasier River and central BC, so when the announcement came that the annual IBA gathering in Jacksonville, Florida landed in my inbox, I jumped on registering. What could be better than a week in Florida, kicking tires and telling lies about motorcycles?

Besides, if I decide not to go, I’ll just pass my ticket to someone else, and cancel my reservations.. right?

While I was making these plans, I was also nervously putting together my application for the 2023 Iron Butt Rally. Everyone quietly assures me “oh, you’re a shoe-in” but I take the entire idea of a “riding resume” seriously, so I’ve spent the last year or so building up not just a quantity of certified rides, but also stretching the difficulty of them. Last year I tackled a pair of National Park Tour (Silver) rides (50+ parks, 25+ states, incl. WA, CA, FL, and ME) as well as my 48/10 (48 states, 10 days).. big rides, any one of which might be a crowning achievement of anyone else’s long-distance riding exploits.. but I’m me, another Gen X over-achiever..

Still, the level of awe that people have for the 50CC Quest — coast to coast in under 50 hours — made me nervous. One the one hand, it’s “only” 35 hours according to Google, a “mere” 2,360 miles.. two long 1,000+ days, sure, but plenty of time in the middle for a good nights sleep and a liberal attitude regarding time management at stops. The Jacksonville party offers a great excuse to make the attempt, since any attempt at a “ride in” rides can be pre-registered for, such that an expedited review process can happen and you’ll get your cert presented at a special pre-dinner awards gathering on Friday..

With that in mind, I quietly put together a plan.. not having ridden big miles all winter, I’d tackle a 1k down to California and work from San Diego for a few days, setting me up for a well-rested early morning departure from San Diego on Friday morning, a week before the hoopla at Jacksonville (Jax) got going. I made a hotel reservation in Jax starting on Monday, which would give me 3.5-4 days to make the run across country if something went sideways with the 50CC, and I could use the extra time to pad my lighthouse, penny, and National Parks stamp collections.

I didn’t really tell many people I was going to try this ride, because I didn’t want undue pressure to keep me on the road if I needed to stop, and because it’s easy to feel like you’re “done” with something if, instead of actually doing a thing, you just talk a lot about how you’re GOING to do a thing. In the end, it wasn’t until Weds, 36 hours before I’d actually leave, I found myself sitting on Ocean Beach, eating tacos from Mike’s Taco Club and enjoying the sunset, that I really made up my mind to just “shut up and do the thing.”

..but let’s go back a week, to when I was still home in Seattle. I’d finally managed to get new tires on the bike, and boy did I barely make it in time. Tires, like so many things, have been an absolute bugger to get the last few months, so I had standing orders at a couple shops who use different suppliers - buy me a front and rear set whenever they’re in stock. Well, all the suppliers apparently got stock in at the same time, and now I’m set until LDX in June 😆 My usual shop for tire swaps threw them on for me Thursday morning while I got coffee across the street, and I spent Friday evening packing. At this point, it takes me all of 20 minutes to throw together a bag for 3 weeks - practice practice practice! 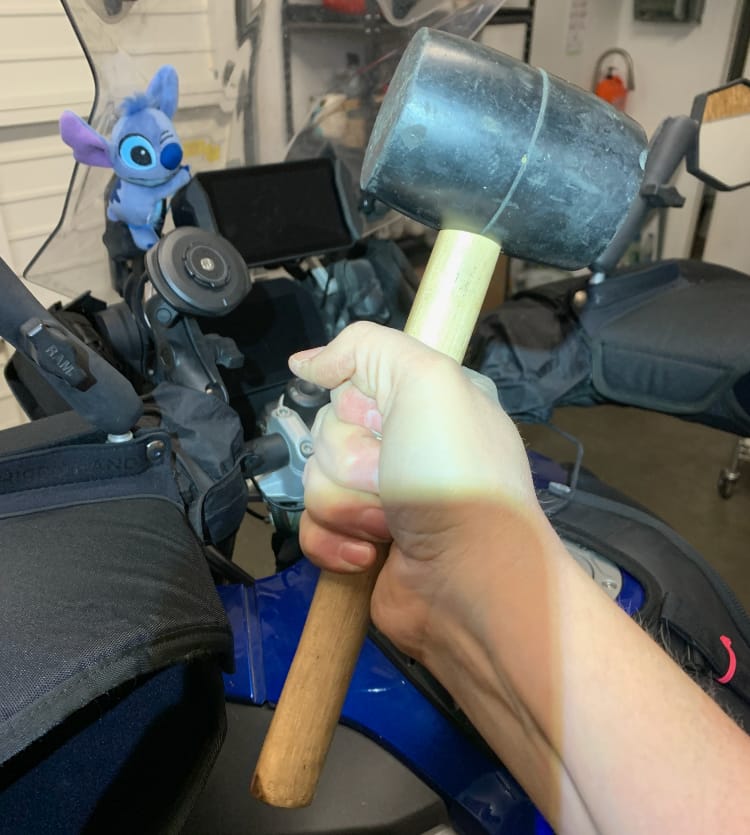 Out the door the next morning at 4am, and as I exited my garage, I thought about the disastrous 1k I attempted on my way to Colorado for the first North by Northwest rally. I dumped the Tiger, fully loaded, on the speed bump on the exit ramp, and that hiccup set the tone for that entire trip. It was probably on my mind since I was purposefully attempting a 1k down to California, and this was a ride I’ve always struggled with. 3 times I’ve had to bail on a “head south 1,000 miles on I-5” and since I hadn’t done any big rides since November, I wondered if this would finally be the day I cracked it.

Turns out, of course, that I didn’t need to worry, and although I was a bit tired pulling into Buttonwillow, CA, I wasn’t feeling wrung out or exhausted from the effort, but I was ready to stop for the night. The Motel 6 was, of course, the only place with vacancies, and man was it everything a Motel 6 promises. I’ve had worse stays, but it’s been a long time since I actively worried about leaving the bike parked outside.

Nothing happened to it, of course. 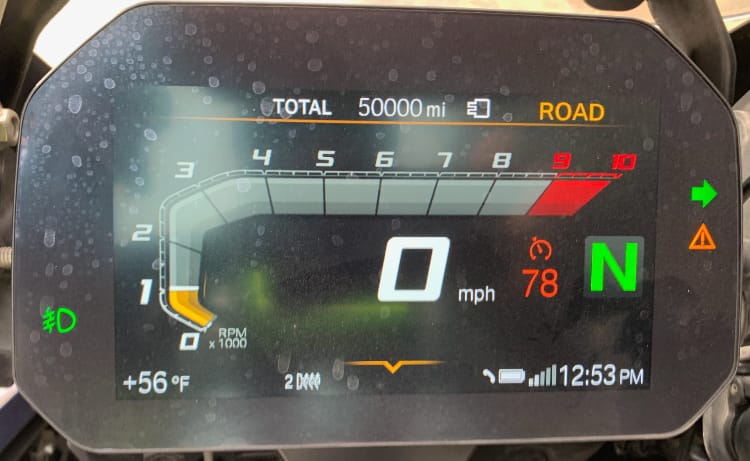 Managed to catch this moment while riding past Mt Shasta!

Again, not having done any big rides in a while, and feeling a bit snake bit by previous I-5 Saddle Sore attempts, I left myself 2 days to get to San Diego, which left me with an extra day in the schedule. Before bed, I did some checking, and was able to score a reservation for Disneyland AND a cheap(ish) room at a decent hotel nearby! Any chance I get to go, I’ll take it..

The next morning I headed due east first, to Keene, CA for breakfast at a local cafe and to pick up a National Park Stamp at the Caesar Chavez National Monument. Their gates weren’t open by the time I finished a hearty breakfast at the cafe, so I wiggled up the few miles to an overview of the Tehachapi Loop, a nearly mile-long section of railroad that actually loops around under itself in order to reduce the grade the locomotives need to tackle crossing this mountain range. It’s a pretty neat marvel of historical engineering, and to realize that not only was this the state of the art, technology wise, but how it was hewn more or less by hand by thousands of Chinese rail workers with little more than pickaxes and blasting powder… pretty amazing stuff, AND we’re still using it - 3 dozen trains a day cross this section of single track, and I watched the tail end of one train wrap itself around the loop before heading back to the National Monument for my stamp. 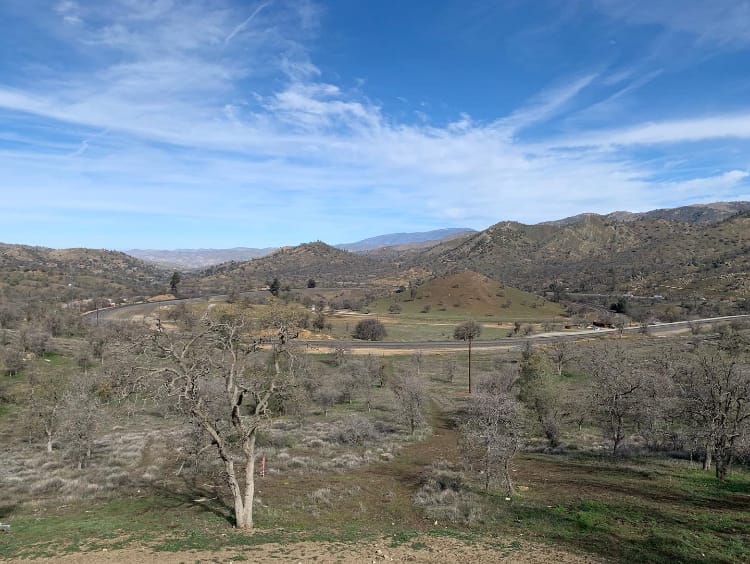 Museum toured and stamp acquired, I decided to take the long way down into LA so headed east out to Mojave, CA and turned south. Stopped in Palmdale for coffee, then cut through Angeles National Forest and picked up the last 12 miles of the infamous Angels Crest Highway for some twisty fun.

At one point I got behind some kids on sports bikes, and ended up passing them in a climbing lane. Didn’t think much of it until I pulled off at a picnic area for a break and they roared in, laughing. Apparently they though I was CHP or something, and then were surprised that I could lead them on a merry chase on the big GSA… apparently I learned a thing or two riding with Johanna last summer. They were also probably just being nice to the fat middle-aged lady; I’m no daredevil! 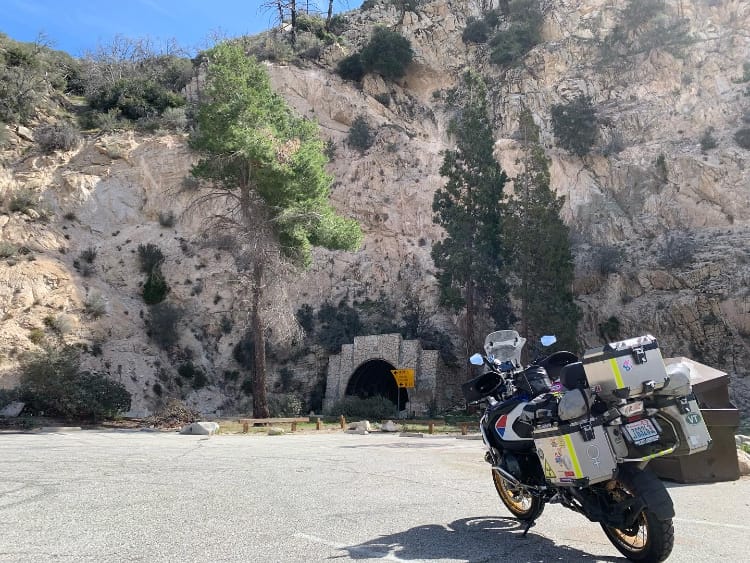 I let the boys rip off, and spent a few minutes relaxing in the suddenly still mountain air.

LA was moving well enough I only had to lane split once, and soon enough I hopped off in Anaheim. Disney Resort hotels start around $375/night, but I’ve had a lot of luck finding cheap, last minute rooms at the Majestic. I got settled in, a little un-nerved with the lack of mask mandates, something I’d be wary of the entire trip. A quick nap, then I headed into the park for some evening hijinks.

On Monday I actually headed down to Ocean Beach. I made a few stops first, taking advantage of pre-dawn lack of traffic on a Monday morning to scoop up three lighthouses along the coast north of Long Beach. At the last one, the Early Morning Old Folks Social Club was meeting, and they were mighty interested in the big girl on a big bike from the north country.. they just couldn’t believe I came ALL THE WAY from Seattle; one guy quizzed me for 20 minutes about riding in Canada and Alaska! He offered to take my photo, and I realized that I almost never get the opportunity, so I relented, then got back onto I-5 and scooted south. 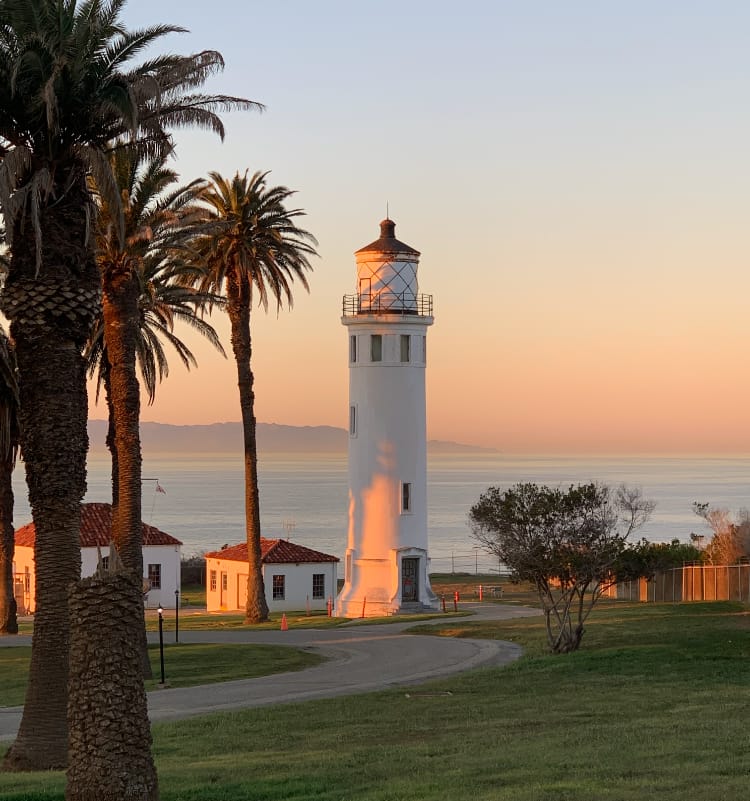 The ride into San Diego was uneventful. I arrived around lunch time, so I shot through Ocean Beach and out to the Cabrillo National Monument, the weather absolutely cooperating, very little wind and nothing but blue skies on the peninsula overlooking San Diego Bay and the North Island NAS. I grabbed National Park Stamps, a penny, and 2 more lighthouses for the collection, then retired to a Peet’s for coffee and some Internet - I do still have a day job, after all! Eventually the clock crawled past the point where I could check in, so I headed to my tiny beach cottage a block off the pier and the main drag in Ocean Beach. I got some dinner at a local Mexican joint and wandered around, marveling at the hippies and the ongoing surf party that seemed in full swing every night here. 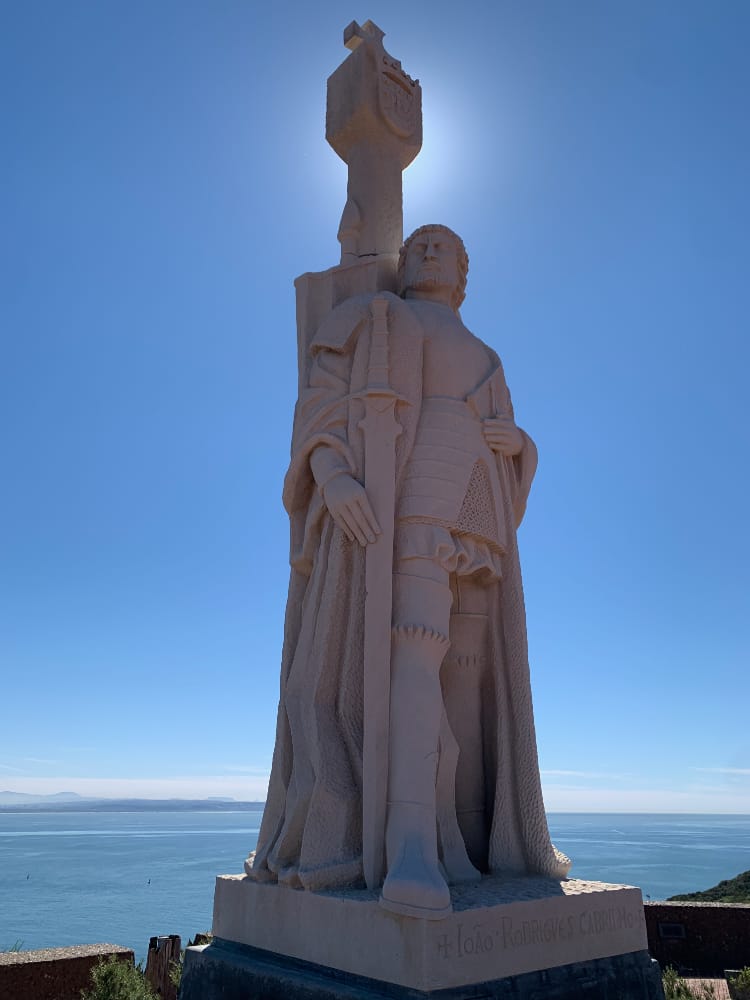 Statue to commemorate the landing of Juan Rodríguez Cabrillo at San Diego Bay on September 28, 1542. It's easy to forget, living on the "young" west coast, how far back our history actually goes...

I spent the rest of this week working furiously, cramming in 10-12 hours days ahead of a vacation week, interrupted with frequent breaks to go walk the Ocean Beach fishing pier, watching the surfers weave their way between the columns below as the waves crashed under my feet. I ate way too many tacos, petted way too many beach dogs, and smelled way too much patchouli (seriously, hippies? It’s 2022, you don’t need to hide the weed smell anymore…) 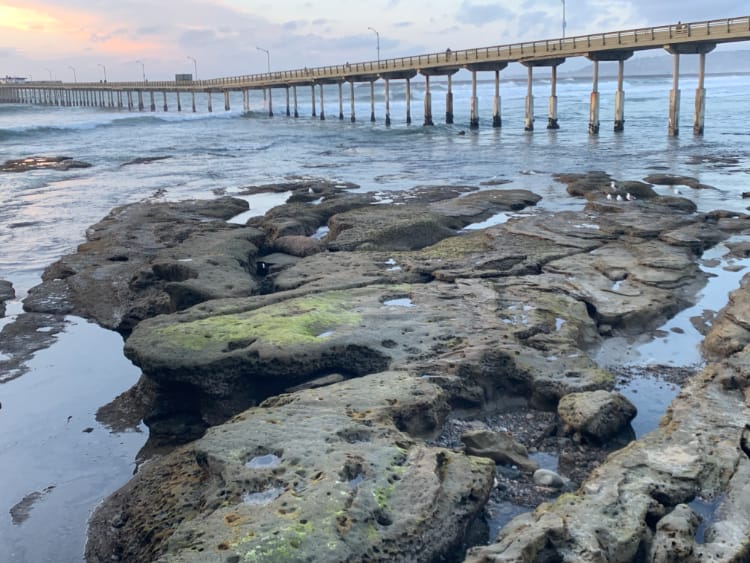 The only real excitement this week was pulling the trigger on a radar/laser detector, which when it arrived I knew immediately was going right back to where it came from. It was clearly a customer return, missing parts and covered with road grime. Boo! Luckily there’s an Amazon returns center in Ocean Beach, so I dropped it off then snuck over to Old Town to pick up 7 or 8 more pressed pennies from various spots amongst the buildings of Old San Diego; I don’t know that I’ve ever seen another city that preserved or celebrated it’s original settlement quite so proudly. 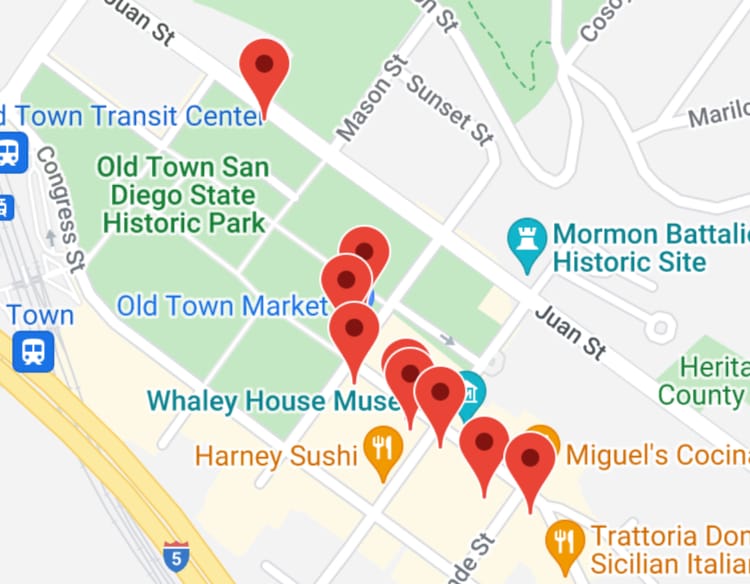