Spent the night in the airplane-themed cabin, and work up around 5:30am, the sun already up, and just laid there for a while listening to the wind. Eventually I had to actually move, and turns out that Robyn was also up and just being quiet, so “hey, let’s just get going and get breakfast in Chicken!” became the new plan. Packed everything up and ready to go by 7, Johanna and Jared were just getting up, their tent inside the teepee, but I figured they’d catch up later, or we’d just see them in Dawson City.

We had to backtrack through Tok, south along AK-2 about 11 miles to Tetlin Junction, where we turn east onto AK-5, the Thompson Highway. Closed in the winter, it winds and climbs through classic Alaskan wilderness - mountains, black spruce, alpine meadows, ravines and flats choked with willow and poplar, the road in far better condition than its seasonal nature might imply. Occasional camp sites and mining claims pass by, but few signs of anyone as you wind upwards along 60 miles of well-maintained pavement towards Chicken, AK.

Coming around a corner, the tiny mining town of Chicken opens up below you. With a summer population of 15, there’s only a collection of 5 or 6 buildings, a post office, an abandoned dredge, and a bush airport to mark your arrival in “town.” In the winter time, the only access is by plane (when the weather cooperates) or by snow machine, ~70 miles to Tok, AK. 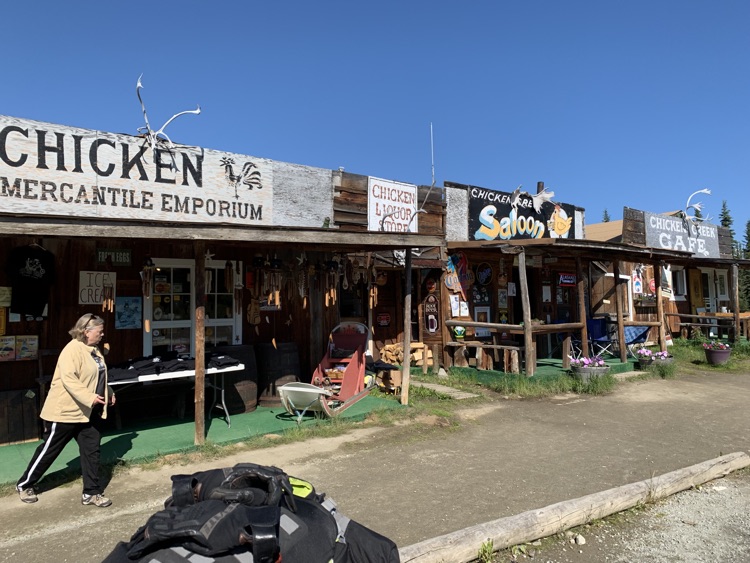 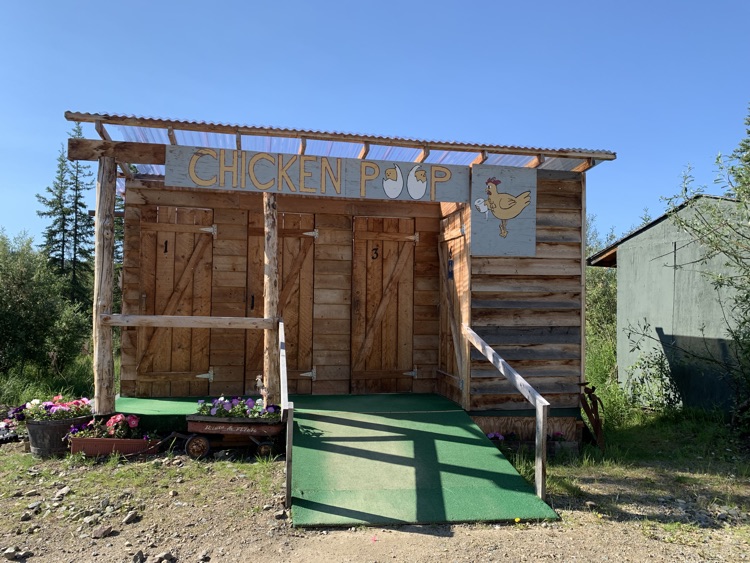 Chicken might only have 15 people, but boy oh boy were they ready for a couple hundred motorcyclists to pass through today! A little past 8am, someone in a chicken costume was already at an “intersection” with an arrow, dancing and pointing us towards “Main Street” where we’d find gas, tchotchkes, and a huge breakfast. A single motorcycle was at the gas pump, an BMW GS whose rider wasn’t in the mood to chat, so we made friends with the guys lounging outside the store, then went inside and ordered breakfast. While waiting, I chatted with a guy named Fatty, who in classic nickname tradition was skinny as a rail. He was from Wenatchee, WA, but likes on Kodiak Island, fishing in the winters, and mining gold in Chicken during the summers. The storms the moved through yesterday caused the creek their placer mine is dredging to rise up high enough to shut them down for a few days; not only was it too dangerous to work in, but they lost one end of their 5” dredge hose to fast rising waters. It’s tethered to a large log, so once the water goes down they’ll be able to haul it back out, but until then he’s just passing time working some odd jobs around town in exchange for food and beer. Nice guy, chatted for about 20 minutes, then Robyn yelled that my food was getting cold, so I ducked inside and shoveled calories into my face. 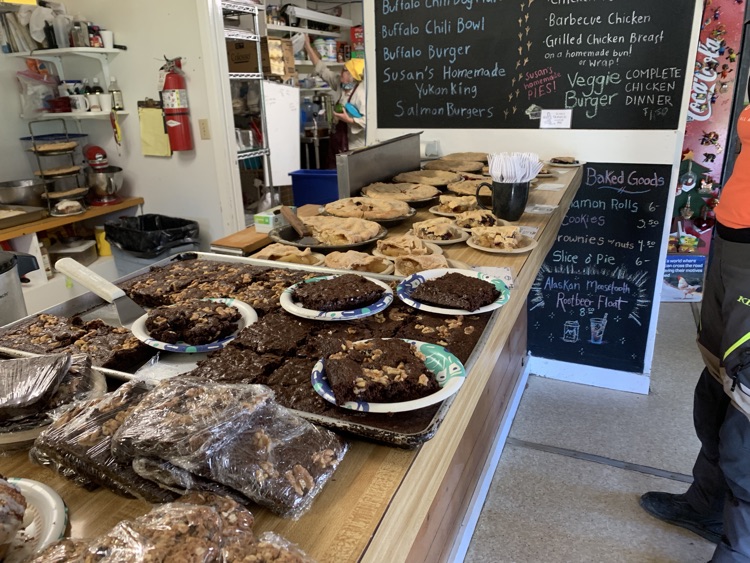 The pie was so-so, but the cookies and brownies were outrageously good!

By now the parking lot was starting to fill up with riders; we were the first to leave Tok this morning, but the “early risers” had caught up to us. We hurried on out of town, with the idea I think to stay ahead of the pack… and good thing, too, since the road immediately switched to dirt and gravel, and whoa boy, was it loose and slippery gravel to start! We met a few trucks and RVs coming the other way, so keeping an extra eye on blind corners, we bopped along at a steady 35mph or so, the road changing surfaces every few miles. The gravel gave way to hard pack, then a washboard section, then a dusty section.. lots of variation, our speed went up and down as conditions changed. No habitations out here, but plenty of mining claims, subsistence hunting camps, backcountry campsites. Lots of small placer operations, with small rockers and trommels; Fatty said the bigger operations were processing around 60 yds/hour, which isn’t world-beating, but can turn a tidy profit for a smaller crew that keeps on top of their running costs.

Only one wildlife encounter today, about halfway between Chicken and the 🇺🇸/🇨🇦 border. I was in the lead and came around a sweeping corner to see a large black bear standing stone still in the middle of the road, maybe 150 feet ahead. I scrubbed speed to a stop, and it acted started and then shoved off, galumphing off into the underbrush. Robyn, who had also stopped 100 feet or so behind me, pulled up to ask why I stopped, rolling her eyes and taking off when I just said “Bear!”

Hey, we can’t all be jaded by the splendor and magnificence of Alaska! 😆 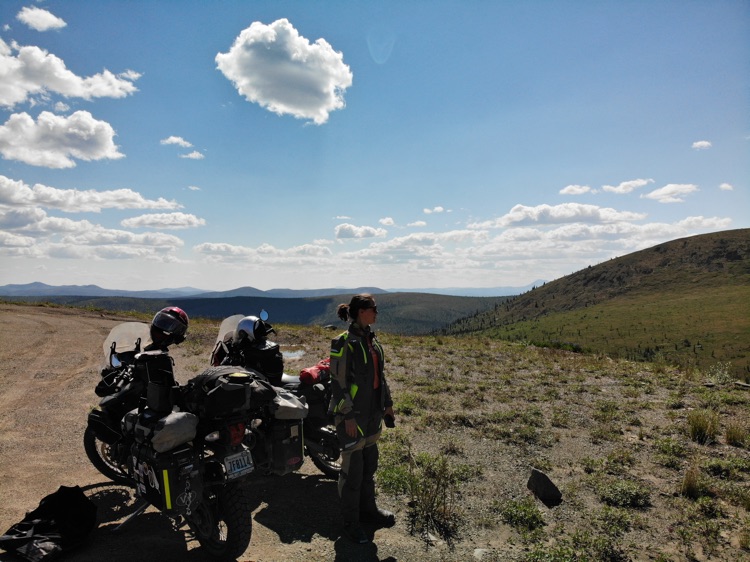 Top of the World Highway really lives up to its name

Just past the abandoned settlement of Jake Wade, AK is the junction with AK-9. AK-5 turns north here, towards Eagle, AK, but we’ll take AK-9 to the border. The gravel is almost immediately replaced with the finest of tarmac, a wide, smooth road that rides for ~10 miles of ridge line, giving us fantastic views of high meadows covered with Alaskan wildflowers, stands of skinny spruce, and shrubby willow and poplar in the valleys. We stopped for a break at a scenic viewpoint and took a stupid amount of photos, including some Sound of Music shenanigans. 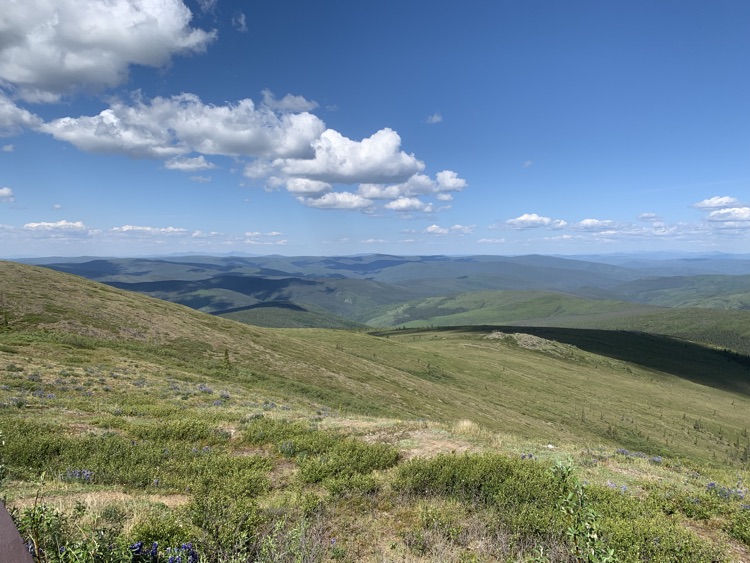 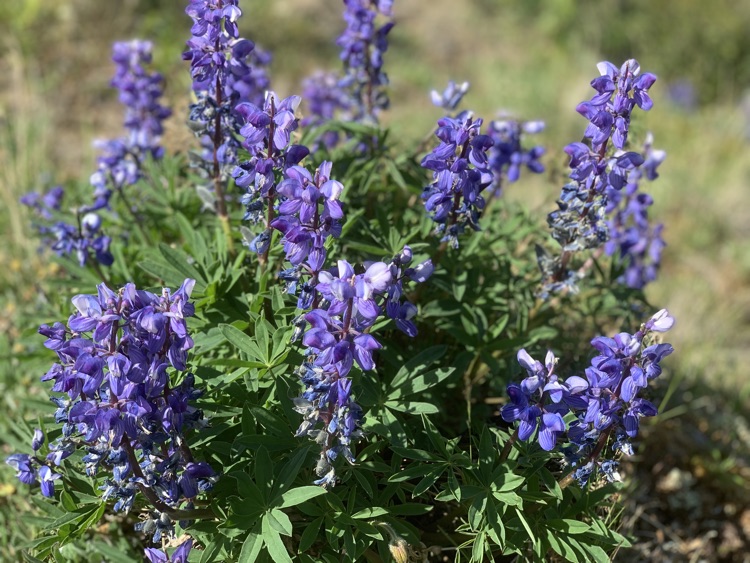 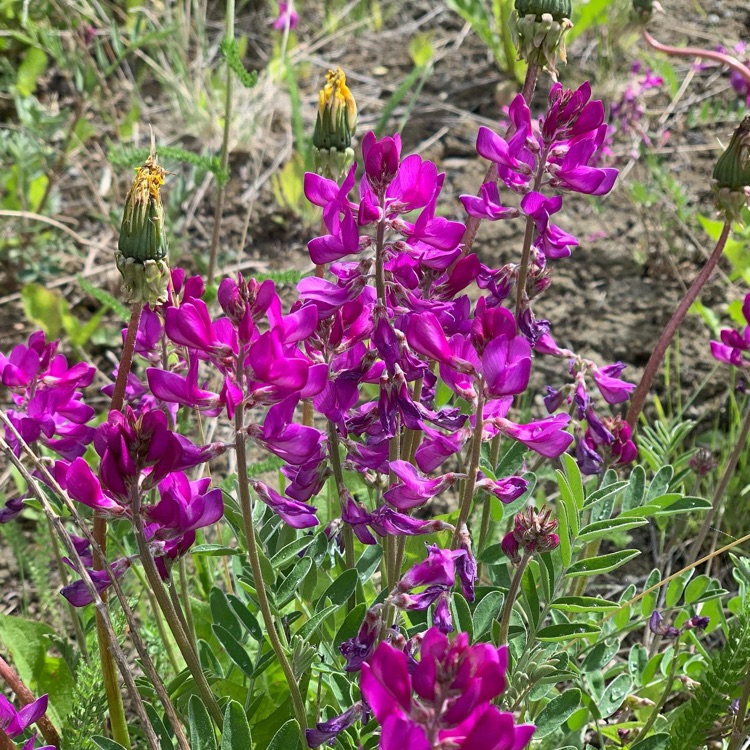 Crossing the border was a snap; Canada is usually just “oh, you’re an American.. no guns, right?” and off you go. Immediately the road turned from gorgeous pavement to dusty marbles, and I slipped and slid my way fishily up a short hill, slightly frightened at how sloshy the bike felt. I forgot that when I stopped at the border, it flipped from Off-Road mode to Street mode, so I quickly flipped it back and instantly the ride smoothed out; Off-Road mode dampens the throttle response and traction/ABS rates, and the bike feels more confident and sure-footed, despite still splashing gravel every which way. 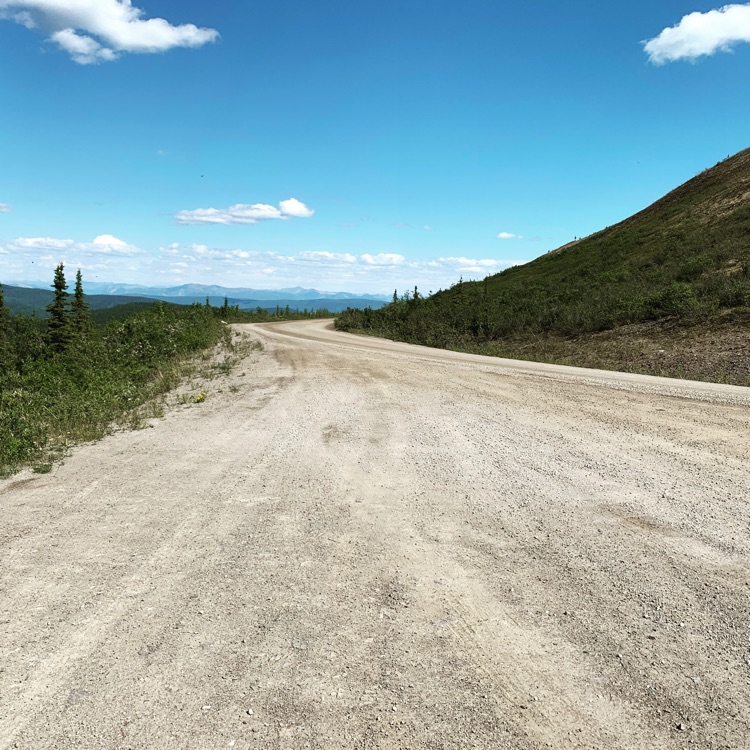 Traffic picks up, as the late-rising speed demons start catching up with us, blowing past far too close and suddenly, raising a cloud of dust and gravel in your face. I can taste the sparkly grit in my mouth, my nose and eyes dried and starting to collect filtered crud as they’re supposed to. Eventually we get back to pavement, shortly after signs start appearing for various Dawson City businesses, weathered and worn from season after season silently hawking hot showers, cold beer, and clean sheets in the town ahead. The road gets an actual guard rail as we pass the golf course, catching our first glimpse of Dawson City as we descend towards the barge ferry that will take us across the Yukon River into the town proper.

We parked and turned off the bikes, hopping off to stretch. The vehicle in front of us in line was covered with mud and dust such that you could barely tell it’s color, and as we dismounted Robyn said “Oh hey! There’s something in the back…” Turns out it was a bear! The driver was a wildlife management officer of some sort, and he had been called out to investigate reports of a bear breaking into the food storage shed of a sled dog kennel who’s owners were out of town for a few days. The neighbor, a young woman with the tattoos and piercings of a Portland hipster, was watching their property for them when the bear bluff charged her and her partner the day before, so they called out the officer. He arrived at the property and had just started circling the back of the building when the bear circled around from the other direction and charged him! Luckily for him (and unluckily for the bear!) he was armed and ready, and stopped the charge, putting the bear down quickly. He explained this all to us and a few other folks waiting for the ferry, nervously smoking; all of this had happened within the last hour or so, and his nerves were still a little juiced up. We gave him some space and got a really close look at the poor bear, whose only fault in this situation was to discover a tasty cache of dog food; the officer said that he’d be writing up a ticket or citation for the kennel owners for not securing their dog’s food better, as “a fed bear is a dead bear”…

The actual ferry dock and holding area is unpaved, the ferry dropping its ramp onto the crumbling silt and gravel at the rivers edge. We arrive just as it finished loading, so we watch as it bravely struggles with the fierce current of the muddy Yukon River, carrying the silt and run off of a huge portion of North America towards the Bering Sea. 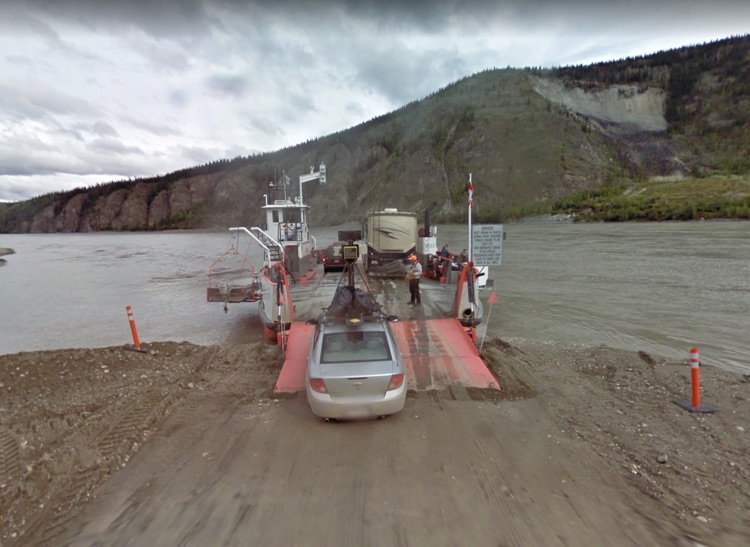 Dawson City ferry (I wasn't able to get a photo, so this Google street view picture will do for now..)

Eventually we got waved aboard, and crossed without incident. Coming off the ferry onto a similar gravel patch of a loading area around 3pm, we zipped past the long line of RVs and trucks waiting to board. We later heard that the waits could be as much as 7 hours, as the ferry is small and they prioritize locals and smaller vehicles. 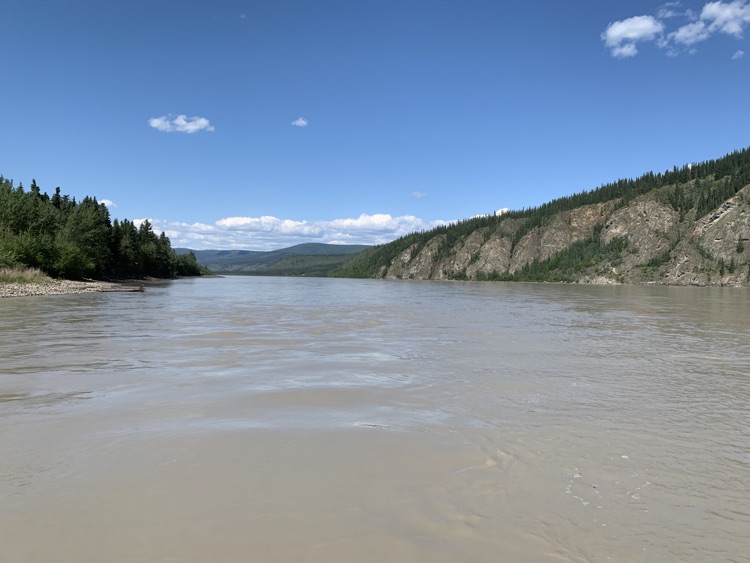 Dawson City itself has no paved streets, but lots of nice little shops, cafes, bars, etc. Nothing fancy, but everything you really need. We dropped our stuff off at the motel and wandered around, finding food at a food truck serving Mediterranean fare — I ended up with a falafel salad in a buckwheat crepe, and later on an ice cream. The sun, setting at almost 1am, prompts everyone to stay out later, and the cafes and ice cream shop were open until midnight. Johanna and Jared eventually showed up, and we all gathered, along with a few other Anchorage and Puget Sound area riders in the bar at our hotel for late night dinner and beers, until not even the bright sun outside could fool our bodies about it being time for bed. 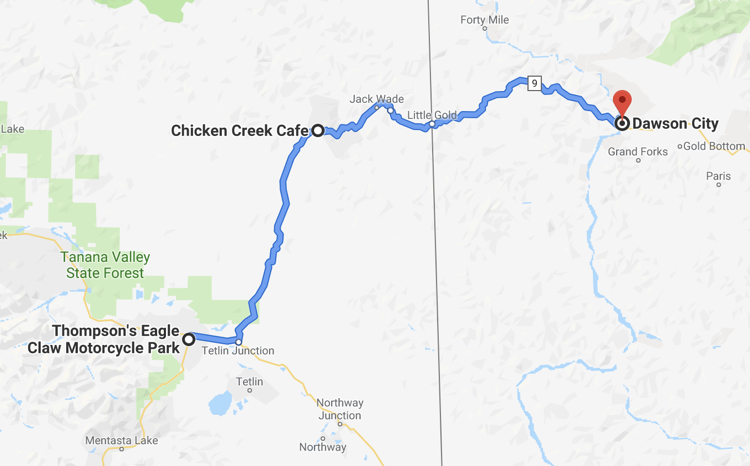