Women motorcycle riders are a small community, and ADV riders an even smaller circle; know one of us, you’re likely to know many of us. Case in point, I stopped at the local Starbucks this morning to get my cuppa, and parked out front was a gorgeous BMW1200R, and as I got off the Tiger, a woman in full Klim gear came on over to say hello. Deborah just road up from Ojai, and we swapped SoCal routes and stories, eventually figuring out that not only were we both at BRO last year, but we know all the same people! She was a hoot, can’t wait to see you in Santa Margarita in October!

It isn’t that I /like/ Starbucks, as much as they’re dependable, the coffee is passable and the wifi strong. They share these traits with McDonalds, but unlike the Scottish restaurant, they don’t really do much to encourage you to move along, so setting up shop and working for a couple hours is perfectly fine. Also, their bathrooms are nicer.

We took local/county roads out of King City, a straight line across fields freshly under the plow, soon changing to long sweepers climbing verdant foothills, trimmed to golf course fairway length by slow, lumbering herds of black and brown cattle. The sky joined the effort to make a perfect California morning, deep blue with distance swipes of clouds, as if added as an aesthetic choice rather than holding any hint of rain.

We stopped at Pinnacles National Park so I could get a stamp; we passed a few opportunities on this trip, but its ok, I managed to pick up one for the Redwoods and Death Valley on this trip, and wasn’t really making stamp gathering a priority. The park itself was full of minivans and families, so rather than suggest “oh lets ride through the park and take a look at these pinnacles” we skedaddled, getting back on CA-25 towards Gilroy, CA. There, we switched over to G-8, passing wineries and sheep farms and small orchards, as well as as handful of reservoirs, keeping the Sierra Azul range on our left. Michelle surprised me with a stop at In-N-Out for lunch, which was solid, but not life-changing; I didn’t really expect it to be!

Now we’re on the not-so-great portion of our short day, slogging back up I-280, traffic was light but starting to build. Luckily we’re fast and maneuverable, and while my courage all week has been building around lane filtering and splitting, my bike is still a big-bottom-boy with the cases, so I was content to stay in steadily moving traffic and not be faced with any though choices.

Back at Michelle’s around 2:30pm, a really nice, short day, with plenty of time in the evening for relaxing, bike maintenance, and lounging with pizza and a movie and friend. Tomorrow I head back north, hoping to make Grant’s Pass, OR, which is the official half-way point in the Seattle <-> San Francisco route. 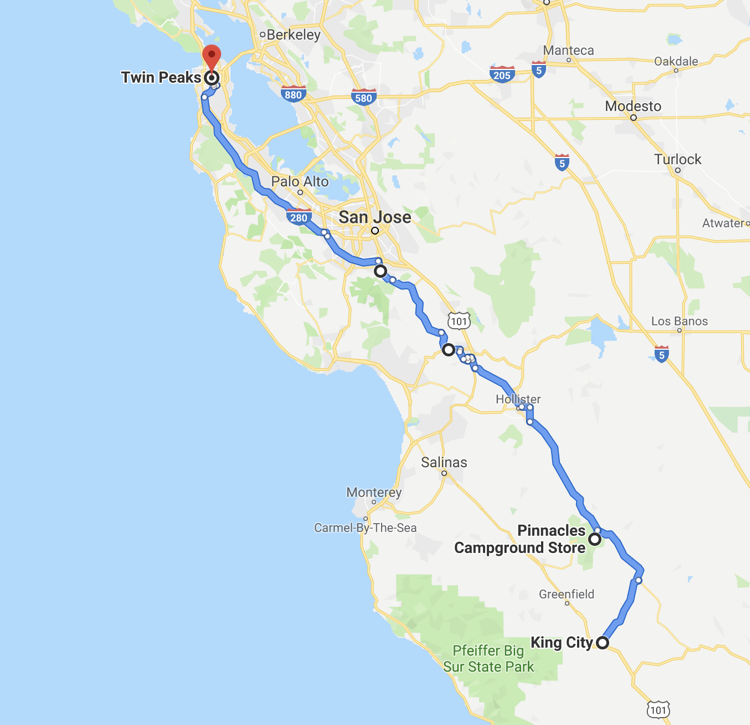