Our original plan — to ride US-50 from SF to Ely, NV — had to be scrapped due to snow in the forecast for eastern Nevada, so we instead decided to head south and see what new adventures we could invent. Hooray for flexible travel companions! I found coffee and wifi at the grocery store Starbucks, and after a quick supply run we headed south out of town on US-95. 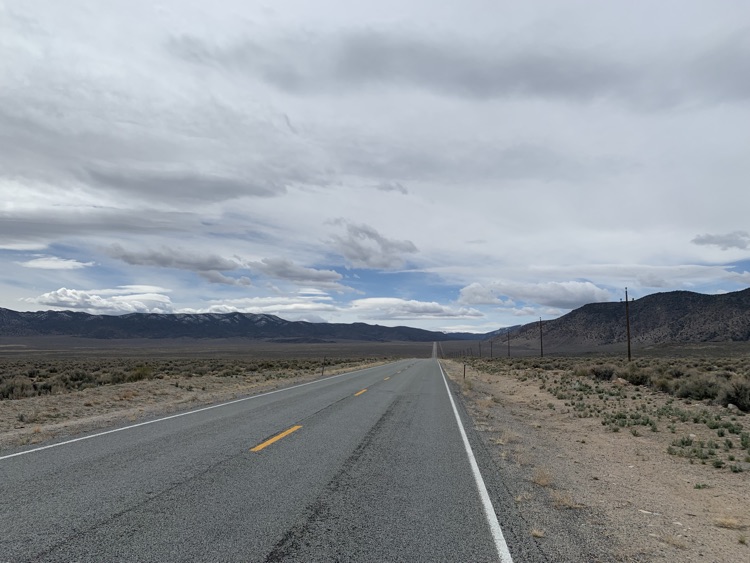 Go that way, very fast. If something gets in your way.... turn.

Of course, one of the supplies I neglected was fuel; I’ve been pushing the Tiger closer and closer to empty with each tank, a change from how I would freak out on The Morrigan whenever my range dipped below 100 miles. 72 miles to Hawthorne, NV and our next possible fuel stop, and I still have 110 miles of range, should be fine, right?

A perfect road to be educated on how the range meter lies to you, long, straight sections of nothing but beautiful, blossoming scrub land and pastures. This is open range territory, and for the first time I can remember we had to slow down due to cattle in/near the highway, never mind dodging manure patties! The only thing worse than running out of gas would be high siding on a pile of cow shit! Thankfully, neither outcome materialized, and hell, I still had 6 miles of reported range when we rolled into Hawthorne!

Hawthorne is an interesting place, a town of several thousand in the middle of nowhere precisely BECAUSE it is in the middle of nowhere — it is home to the US Army Depot, the world’s largest ammunition storage center. It is a massive, sprawling complex, and signs on both sides of the road into town warn you “PROHIBITED: UNEXPLODED ORDINANCE PAST THIS POINT” I decided to trust the signs, and soon we were on the state “highway” 359, a road last paved in the Ford administration by the looks of things. It curves gently around towards the CA-NV border through a section of the Toiyabe National Forest, turning into CA-167 for an arrow-straight 20-mile slash across the north shore of Mono Lake. We stopped at the lake for a bit, as scenic and as welcome a sight as ever, although the downslope wind was really picking up as it dove off the Eastern Sierra range. 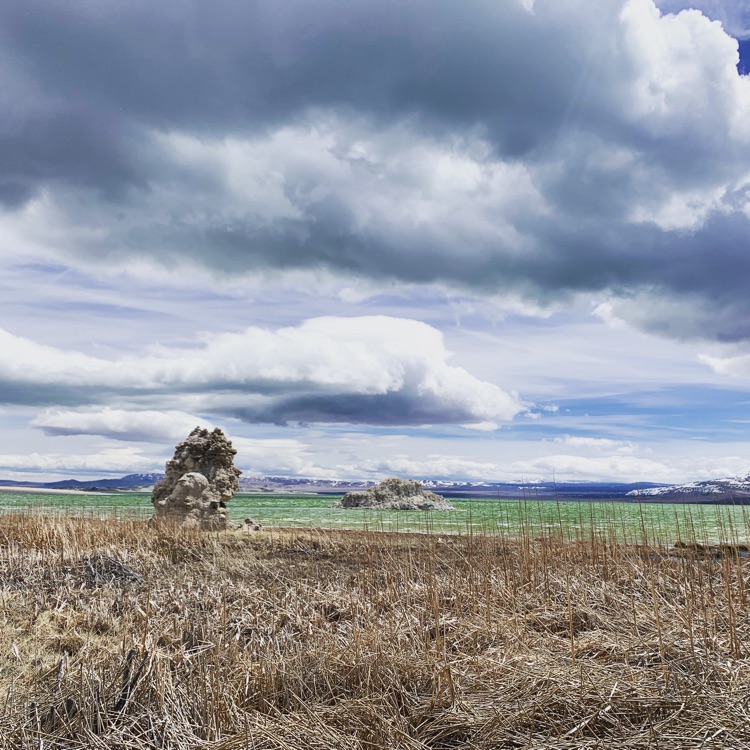 Mono Lake was windy and far less fly-infested than when I visited in October...

After a quick lunch in Lee Vining, we made our way south to Bishop on US-395 past Mammoth Lakes and Yosemite, both closed until summer really hits. The temperature dropped to 41F, 42F, and Michelle, on her somewhat naked FZ-07, zipped ahead while I putted along, happy with my heated gear. The wind really began to pick up, at one point a becoming particularly dangerous! I was passing an SUV driven by a cell phone head-nodder that drifted half into the passing lane, forcing me to decelerate and move far to the left. The turbulence from the SUV combined with a particularly strong gust of wind at just that moment to push me onto the rumble strip. I down shifted and tried to get back right, but the rumble strips gave me no stability and the wind just kept shoving me to the left, so into the soft volcanic sand I went! I bounced a pannier off a flexible snow flag but kept the bike upright and myself safe. Angry at the idiots driver, annoyed at my own miscalculation, I crossed over to the right side of the road and paused to catch my breath.. scary! 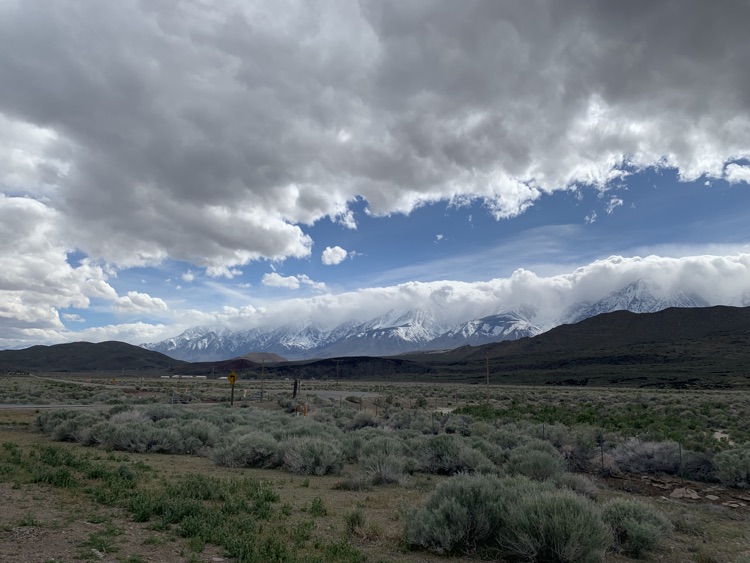 Bishop was as busy as I remember it, and I met back up with Michelle, and after a quick coffee for me we headed to Lone Pine, CA for the night. Town is full of motorcycles this evening, lots of dusty and dirty KTMs and BMWs; I stopped to chat with one knot of the Klim-clad lads and of course they had just finished the CABDR. “Is the sand as bad as people say?” I asked, and the reply came from one dead-eyed gentleman who, with a thousand yard stare, said “It just stopped being fun at some point…” 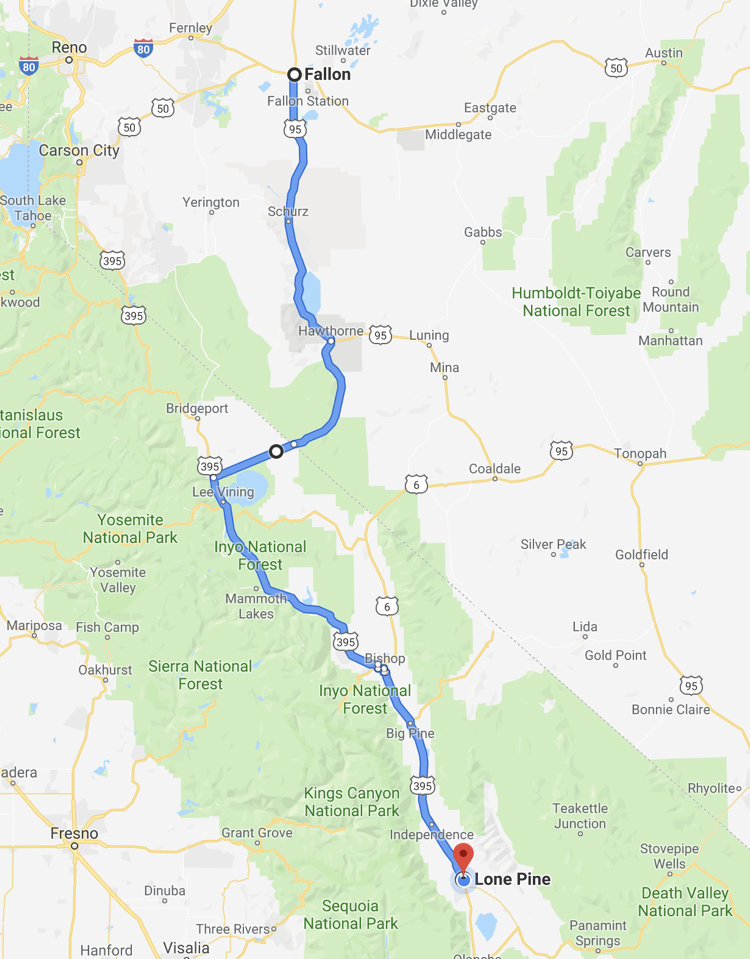