Opting for an actual breakfast, we rode the 15 or so miles south out of Independence to Lone Pine, a town with a smidge more commercial activity, which boasted 4 different breakfast options - a bustling town! We parked around the corner from the Totem Cafe, next to a wall covered with memorial plaques commemorating the famous guests at The Lone Pine Film Festival; eastern California, within a days drive of Los Angeles, sure was a hoppin’ place in the heyday of the automobile.. This town was on the main route to the western entrance to Death Valley, so that probably influenced things.

The Totem Cafe was a solid breakfast, nothing revelatory but hit the spot perfectly, sitting in half of a storefront on main street, the other half appearing to be an temporarily empty curios shop; there were still a few fixtures holding a scant handful of knick-knacks and Native American-themed tchotchkies. Hard to tell exactly how temporary the emptiness was..

100 miles or so, following the Coso Range, the valley gradually widening and sloping downwards. The sage and tumbleweeds gradually gave way to creosote and mesquite, and I spotted the first joshua tree and yucca plants outside Coso Junction. US-395 bends east, and we stopped for gas and a timing check. Suze and I split up again here, her 1200GS soon disappearing far ahead of me; I relearned the lesson from chasing Jen in Alaska – the VStrom 650 just can’t keep up with that 1200 boxer engine and a talented rider! That’s ok, I was fine poking along at 70, as traffic intensified as the sun started really beating down. Amateur drivers weaving, straddling the lines, tailgating, dodging in and out between me and the tractor trailers made for a nerve-wracking ride south, so when I got stopped by a train and a long construction delay at Kramer Junction, I stopped and stretched, deciding then to stop at the Cycle Gear in Victorville for chain wax and some Internet.

The guy at the counter was overly helpful. The shop was empty save for the 2 of us, and I stopped once inside the doors to scan for the oil-lube-tool section, and Chris helpfully chirped up “What can I help you find?” He then made himself utterly indispensible, all but holding my hand while leading me to the exact shelves with the chain lubes and degreasers, and then explained every single brand or variation and what they were good for; he meant well, was trying to be helpful, so I politely nodded and waited for him to finish, then reached right past him and grabbed the thing I needed. We then, of course, had to spend 10 minutes talking about my bike, my travels, his young daughter, etc.. was a nice conversation, which is rare for me with most guys who ride.

Chain wax finally acquired, I sat in the next-door Starbucks and grifted their wifi and grimacingly sipped their coffee for an hour before getting back on the bike. GPS took me down a long stretch of historic Route 66, and I was tempted to take some pics; with all the slabbing I’m doing on this trip, combined with the landscape being rather unphotogenic to the iPhone camera, I haven’t really been photographing as much as previous trips. Route 66 disappeared and I turned onto a road that was showing signs of last weeks rain storms, which caused widespread flooding and washouts all over the region; many road surfaces would still have sand or mud washed over them, making for some cautious, attentive riding. Rolled through the town of Joshua Tree around 3pm, stopping at the national park’s visitors center to get my stamp and refill my water bottles, then on to the Babes Ride Out campground. A few hundred women were already there, tents and RVs all orderly parked. I followed a pack of cruisers in, and tried to give them plenty of room and patiences as they struggled in the loose sand of the campground roads; it was a bit sloshy even on The Morrigan, but nothing I was uncomfortable with. I watched one low-speed drop by the registration area, and felt really bad for her embarrassment; I tried to convince her to “Captain Morgan it” and own the drop, but the cruiser crowd really don’t have the same attitude about dumping your bike as the ADV folks seem to. Riding in, I spotting only a few other ADV bikes, a Tiger, a GS, a couple DR650s.. I’d end up meeting and riding with most of their owners, I’m sure. 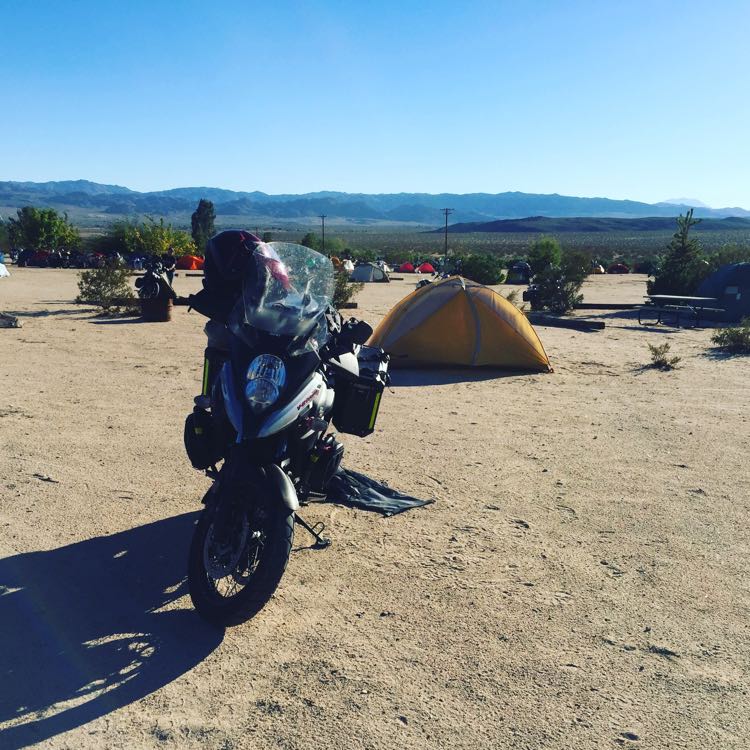 Got settled into the Women Adventure Riders camp (the W.A.R. Zone!), and I’ll be camping here for the next 3 nights. The campground itself has plenty of water, decent porta-potties, and a good selection of food trucks and beverages in the festival area; its not quite glamping, but I’ve never camped someplace that offered free beer, avocado toast, and jackfruit curry bowls before; now, if they only had hot springs… 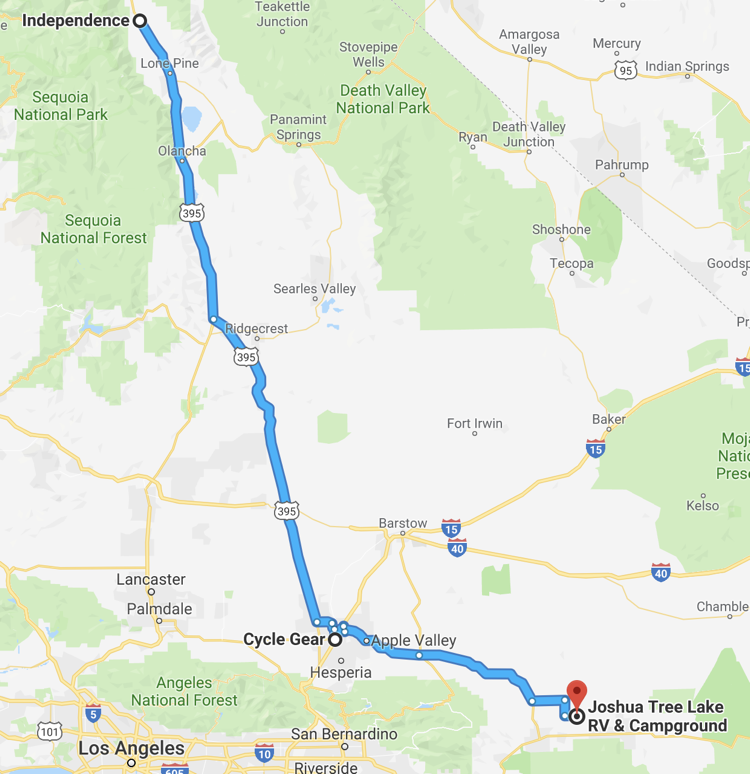