Every trip planning nerd, pouring over their maps and tools, at some point asks “How many states could you visit in one day?” While bounded by your own definitions of what a day is, and how far you feel you can safely travel in that time, there’s no argument that you’d base it in New England, with its tiny states criss-crossed by state highways and interstates; all 6 in a day is entirely reasonable, and you could get to 7 or 8 by going into New York and then Pennsylvania or New Jersey.

I opted to only cross 4 today, grabbing 4 stamps and 3 states towards the Iron Butt National Park Tour Challenge. I left Vernon, VT around 8am, with the plan to arrive at the Blackstone Valley Chamber of Commerce, which is one of the locations that holds the Blackstone Valley National Heritage Corridor stamp. The Giggle Lady took me south into Massachusetts, and then on a series of backroad shortcuts that I barely know, despite having grown up barely 10 miles away, on dirt roads where I had to dodge tractors and wild turkeys but little other traffic.

Finally it dumped me out onto the familiar race track that is MA-2, a twisty 2-lane that serves as the main east-west artery across the northern half of Massachusetts, I joined the eastward-bound morning traffic that grew steadily in number, speed, and aggression as I headed towards Boston, then an exit and I’m back in the well-groomed rural communities on the outskirts of the ring around Boston described by I-495 - gentleman farms and rural estates for white-collar professionals and the well-to-do, slicing down through Worcester, until arriving in Linwood, MA, where a converted mill building, stereotypical in most New England towns on a river of any size, of course it has senior housing, a brewery, design firms and architects, and vague businesses with names and logos that betray nothing about what services they offer. A helpful retired gent directed me around the complex of restored brick buildings, where I found out that despite the hours listed on their website and their voice mail, the Chamber of Commerce was in fact closed today. A minor setback, there are other options for Massachusetts, but of course I can’t get my password manager synced between my phone and my laptop, locking me out of my main research tool for this challenge, the ever helpful http://parkstamps.org.

I retreated to a Dunkin’ Donuts for coffee and internet to figure out my next move. This wasn’t the first stumble in this challenge, so I had backup plans; the Blackstone Valley NHC spans both MA and RI, and a stamp for it is also held at the Museum of Work & Culture in Woonsocket, RI, which is on my way to Providence, RI, and I need at least 50 stamps, so a slight adjustment (and a small black coffee in my belly) later, I’m in Rhode Island, chatting to the volunteers at the front desk of the museum. The retired woman at the counter informs me, while digging around for the stamp, that I have a lovely accent, but seems disappointed I don’t want to tour their collection of Woonsocket history. I wish I had more time, but honestly I’ve seen a lot of small town museums at this point. The stamp itself has a location on it of “MA & RI” which gives me pause - will the Iron Butt Association accept it as a Massachusetts stamp? I can add the Armory in Springfield, MA on my return journey; I’m eyeing the clock and know I have quite a bit more riding to do today if I’m going to make it. 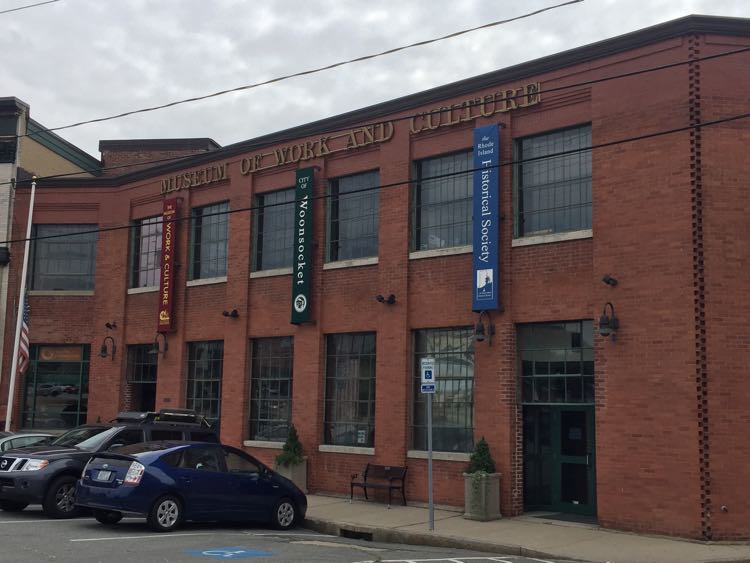 The Museum of Work & Culture

I haven’t been to Providence, RI before, but just like the state, it is small, compact, and charming. The Roger Williams National Memorial is dedicated to the guy who founded Rhode Island when the Puritans kicked him out of Massachusetts for being too zealous and straight-laced. Like most rangers/site attendants at the smaller National Park Sites, the young ranger in charge of the visitors center was eager to chat; she was from New Jersey but attended college in Providence, started working summers at the site before realizing she quite liked it, becoming an official NPS ranger when a full-time position opened. We chatted for a while about their demonstration gardens, which were lovely but small, one a 1600-1700s kitchen herb garden, and another a demonstration garden of the fabled Three Sisters approach of planting, perfected by Native Americans - beans, corn, and squash. The squash shades the ground, capturing moisture in the soul, the beans fix nitrogen, and the corn provides a natural trellis for the beans. 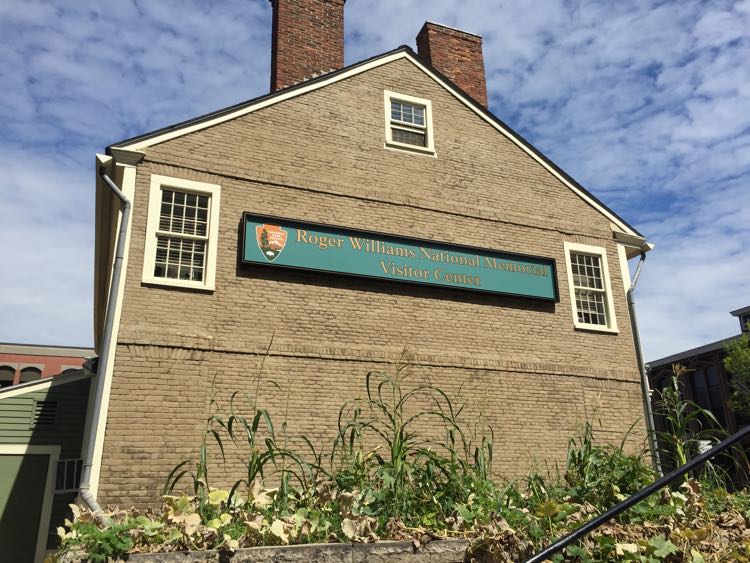 The visitors center, with the demonstration garden in the foreground

I get slightly lost crossing into Connecticut, thanks to ambiguous directions from the Giggle Lady, and I not for the first time consider spending the money on an ACTUAL GPS unit. She finally gets me to the Prudence Crandall Museum in Canterbury, CT, where the parking lot is roped off and full of tents. It turns out to be Prudence Crandall’s birthday, and the locals are celebrating her with 1830s crafts, games on the green, and hot dogs from the Lions. I love small towns!

Prudence Crandall is an interesting woman. A Quaker, she ran a girls school in the 1830s in the building the museum currently resides in. She was approached in 1832 by a young African-American woman who asked if Prudence would be willing to risk admitting her. After several days of prayer, Prudence did, which led to the town’s white population to freak out and take their girls out of the school, but Prudence began accepting other young African-American women, and kept the school open for 3 years, in defiance of a law passed by the Connecticut legislature forbidding this. Finally, a mob attacked the school one night, and while none of the students were injured, it scared her enough to shut down the school and head west to Michigan (and later Kansas.) Today, she is recognized as an early Abolitionist and is honored. There’s a delightful 10-minute video (with surprisingly high production values!) and while there’s few artifacts to see, there’s quite a lot of history in that building and Prudence’s story, so it was worth the stop. 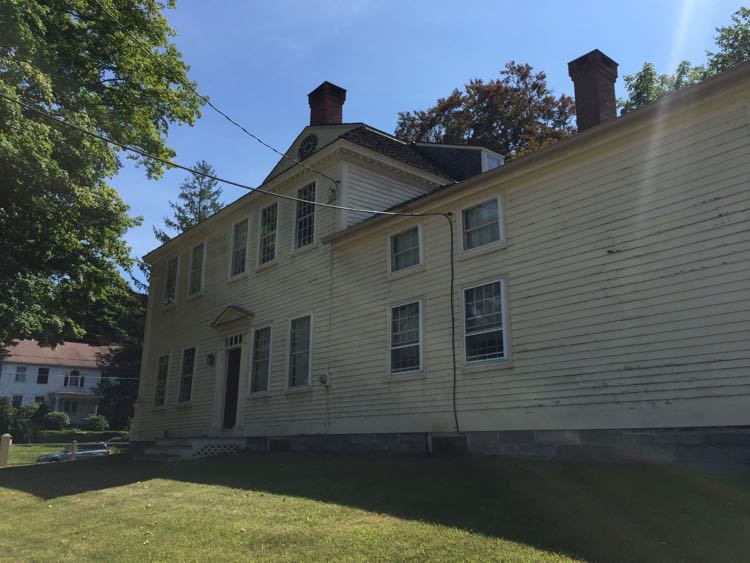 The stamp here was for The Last Green Valley National Historic Corridor - 3 stamps, 2.5 states.. next stop, the Springfield Armory, in Springfield, MA. The Armory is a massive, sprawling complex of brick buildings that have churned out millions of weapons for the US military, beginning shortly after the Revolutionary War until the Vietnam War, when the military first began to outsource their weapons R&D and production. The visitors center is a sprawling museum of the history of fire arms, drawing from the private “reference museum” curated by the Springfield Armory during its years of operation, and is quite comprehensive. Everyone but me visiting was wearing some kind of flag, “love it or leave it,” or Harley-Davidson shirt. One guy had an empty holster, clearly having left his sidearm in the car or at home. I got my stamp and skedaddled.

I stopped in Whatley, MA for a late lunch at the 24hr diner, a still-thriving college kid and trucker hangout. I then took backroads to see The Bridge of Flowers, an old footbridge across the river that bisects the town of Shelburne Falls, MA, now converted into an ever-changing public garden. 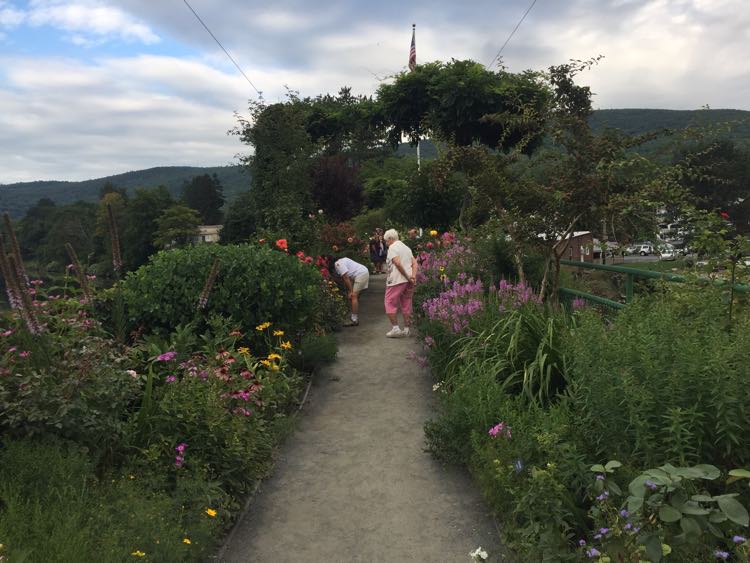 The Bridge of Flowers 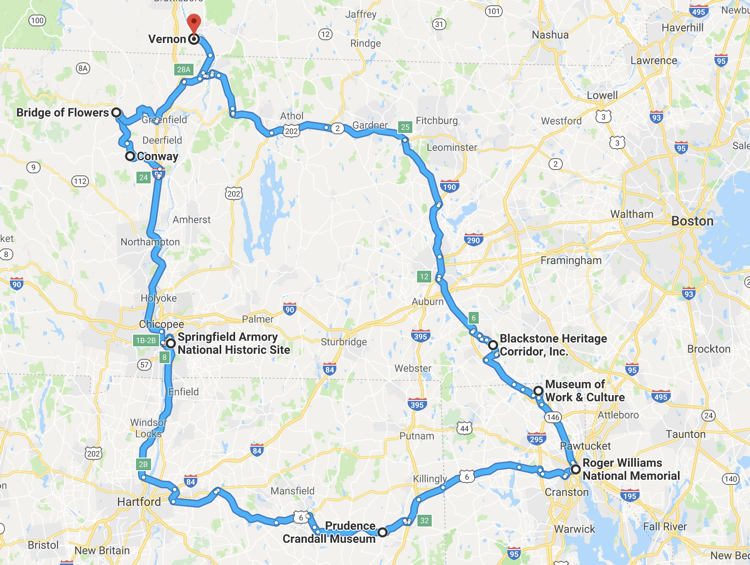