Up and showered by 6:30am, packed and on the bike by 7:15am.. its hard to pack my camping gear on shaggy wet grass, but somehow I managed. I’m always surprised how quickly packing goes. My gear seems to explode every time I stop for the night, but really its only 1 or 2 bags that I unpack, the rest just come off (for security, I don’t leave the camping gear unsecured on the bike overnight..) Found a gas station coffee shop with wifi to squat at for a couple hours, cleaned and lubed the chain on The Morrigan, and basically puttered until 9:45am, when I got back on the road. Destination: Effigy Mounds National Monument.

I took I-90 for a couple exits, then onto a series of US, state, and county roads for 2 hours. I crossed into Iowa about 20 minutes in, and the ride was great. I had good weather, the road was in good repair, and fast, with speed limits of 60 with only the occasional small town to slow down for. The roads didn’t even feel as straight as they look on the map, and the further east I went, the more the land seemed to swell and bunch, the road actually curving around fields and farmsteads instead of jogging at right angles or dog-legging. The small farm towns, each well-kept and tidy if a bit rundown, all had population of under 1,000, but folks were out mowing lawns, walking dogs, sitting outside on porches waving at passersby. Wholesome.

At some point I smelled a farm.. and I have to try to explain why this smell was different. So far, farms along this route have smelled like manure, silage, and death - a smell peculiar to large beef cattle operations. The farms on the other hand, smelled of manure, silage, and the sickly-sweet smell of milk cows – I was in diary country! ..and not just ANY dairy country, but HOLSTEINS!

(Look, I’m from Vermont. I got excited.)

So we’re winding and curving along at 60mph, enjoying the day and the fields and the cows, and suddenly the road drops down into a narrow canyon choked with trees, so much greenery and trees and vines and whatnot, more than I’ve seen since crossing the Cascades on my way out of Seattle.. and the smell! It smelled green and cool and fresh. Down this ravine the road snakes, until without much ceremony, you emerge on the banks of the Mississippi River and Effigy Mounds National Monument.

The mounds were built by the succession of mound builder cultures, and are scattered all throughout the United States, but are concentrated in the upper Mississippi River valley. Some are simple circular mounds, some are petroglyph-ish bears and deer and birds, and some are geometric swirls and dots and the like, but most are ceremonial graves when dug into. I got my stamp and poked around the visitors center for a bit, but the actual mounds are a 3.5 mile hike and I wasn’t really feeling up to it today, the heat and humidity having build up over the morning.

Packed up the bike to head out, and chattered with a guy from Florida about his BMW K1600. Most guys are surprised I’m not on a BMW R1200GS, which is basically the default Adventure Touring machine, and he was no exception. He gave me helpful man-advice about getting back across the country before winter sets in, blah blah blah.

I crossed the Mississippi into Wisconsin, and took WI-60 as it followed the Wisconsin River upstream along its northern bank. Trees crowd out the sky, embracing my vision in a leafy hug. The humidity and heat built for the next 2 hours, but the riding was top notch, winding up alongside a river with dairy farms and waterfalls and marshes and so much LIFE! when compared to the plains of South Dakota. I was actually carving turns and got into a few twisties in this stretch, making both The Morrigan and myself purr. Eventually we pulled in at Devils Lake State Park, where I got my Wisconsin stamp for the Ice Age National Scenic Trail. I need to build a spreadsheet to keep track of my states and stamps! The park was super busy, and it took a bit to navigate the busy parking lot by the beach area. Lots of families out today! 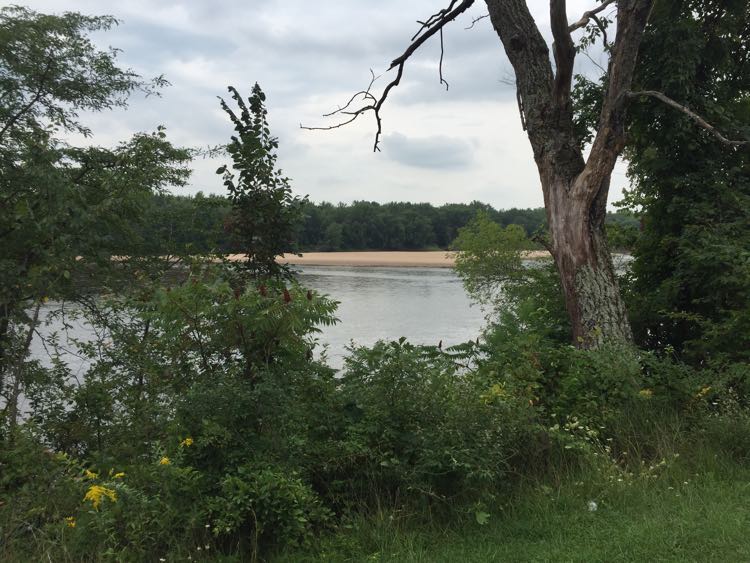 River keeps on a'rollin' down to the sea

I took some backroads to get back to I-90 to continue east towards Madison, WI, and a couple miles before getting to the onramps, noticed the dark sky in my mirrors. I blanched a bit, remembering how dramatic afternoon thunderstorms can be out here, and raced to Madison, a city I know well, having visited it at least a dozen times over the years. I stopped at my favorite frozen custard place for a sundae and a burger, and just as I finished eating the skies because to spit, giving me just enough time to fetch my helmet and jacket before the deluge began in earnest. I sat around the deserted diner for 45 minutes, until the rain stopped and the weather radar suggested I might have a window to make the next 70 miles to Rockford, IL, where I am staying tonight. That was a LIE, because 20 minutes down the highway I got caught in a sudden downpour that drenched my legs and ran down under my Frogg Toggs and the neck. There was so much water that I was kicking up splashed big enough to soak my boots and made me afraid of hydroplaning, so I gingerly pulled off at the next exit. Thankfully there was a country club there, mostly deserted, so I parked in the lee of a building (the wind was gusting something fierce) and I took shelter under the awning of a gazebo. This time the rain only lasted 10 minutes, and then the sun came out and birds chirped.. but I was still soaked! 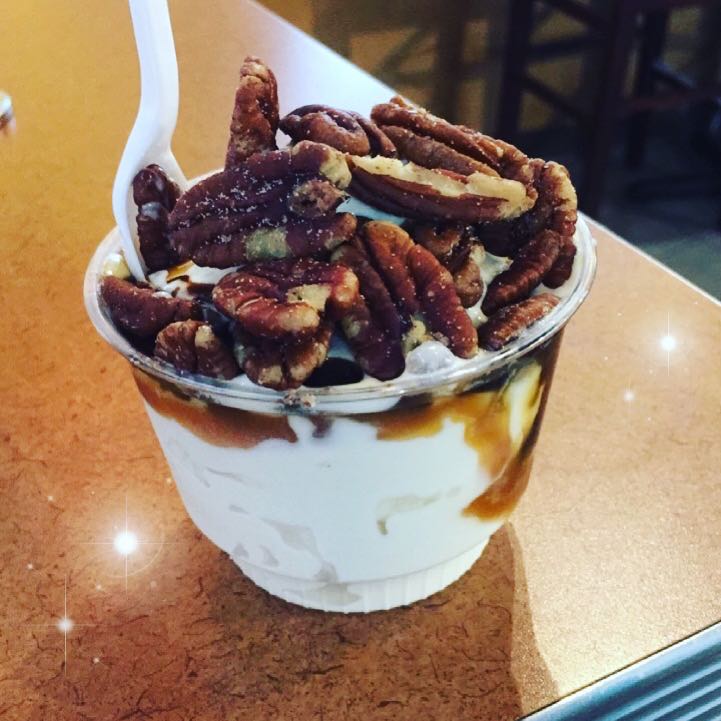 Worth getting soaked for

On to Rockford. One feature I like about the Giggle Lady is she welcomes me robotically to each new state. “Welcome to Illinois” she deadpanned, right when I hit the first giant crack in the pavement and jolted awake. “END OF CONSTRUCTION” a sign immediately after announced, and I thought it quite fitting, given how little construction ever seems to happen on this road. I’ve driven between Madison and Chicago since the 90s, and its always a junky bit of freeway. I blew through the first cash toll as well, not will to stop, take off all my gear, find $1.90 IN EXACT CHANGE AND ONLY CHANGE NO BILLS ACCEPTED.. you can pay online, I just have to remember to do that. I really should just get the EZPass, given how many toll roads there are out here.. but ugh, a quick online search points out they’re not waterproof, get stolen all the time, and often don’t even work.. and require a mounting solution that would either be expensive or deface my motorcycle so.. well I guess I’ll avoid toll roads? Pack a couple rolls of quarters into the tank bag? As much as we complain about tolling in the PNW, at least its all done with cameras reading your plates and there’s not bullshit transponders or beacons or whatever.

Anyways.. tomorrow I’m working again, then following I-90 around the lake. I’m going to attempt to stop at the Pullman National Monument, and the Indiana Dunes National Lakeshore for stamps, and am aiming for someplace just outside Toledo, OH tomorrow night. That’ll let me pop up into Michigan to grab a stamp from a National Battlefield Memorial, a stop in Cleveland for the James Garfield NHS, and then spend the night in western New York somewhere before a final push to New England. 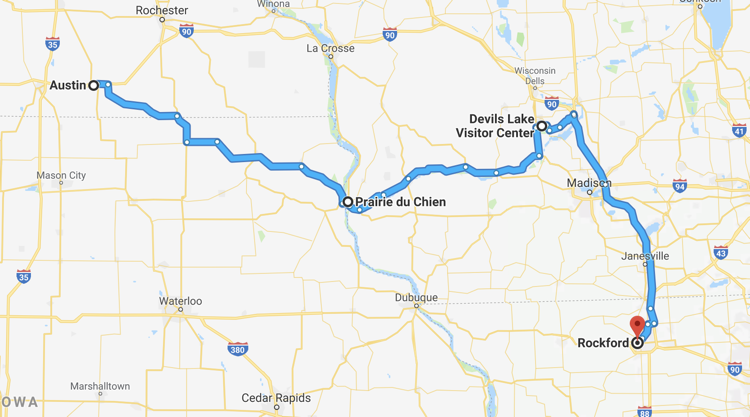