I slept in, knowing I was going to be riding all day instead of getting online by 6am for work, but still managed to get on the road by 8:30am, fueled by a pair of mini-donuts and a cup of bad coffee – “free breakfast” at motels is a blessing in terms of $/calories, but isn’t the healthiest thing. The only plus side was bumping into a French-speaking couple on a Harley. They had almost zero English, but I had even less French, so we laughed and smiles and wished each other well. I studied French for like 5, 6 years, and can barely say “good morning”.. I should get into a conversation group when I get back to Seattle.

I-90 had a bit more traffic this morning, as tourists and families and weekenders joined me for a change. This part of South Dakota is a bit more barren and scrubland-ish, but some hardy cattle herds chewed on tough looking grass and shrubs as I buzzed by. I spotted a pair of antelope near one herd, so I guess there’s little in the way of competition. I like to think the antelope are like “we were here first, but we’re all in this together!” while the cows are like “you’re a funny looking cow but whatever mooooo”

Another tourist trap town I skipped - 1880s Town, which from the highway looked incredibly green, well-maintained, shiny, and full of minivans. I might have stopped if it wasn’t a Saturday, for 2 reasons: first, I still felt bad about skipping Wall Drug, and second, they have a CAMEL! I actually saw the camel grazing happily in its paddock next to the highway.. and I didn’t have to pay admission!

The range and pastures started to get patched in with small, struggling tracts of unhealthy looking corn, and the land started to ripple a bit more as the road dived down to cross the Missouri River at Chamberlain, SD, an hour and a half from Kadoka. I stopped at the rest area and read the plaques and stretched my legs. The visitors center there had a small but well-designed museum about the Lewis and Clark expedition, which also had a model of the keelboat they travelled in that you could walk around on! It was pretty amazing, as I’ve seen the blueprints and the measurements for the keelboat and the pirogues they used, but never really /felt/ what it was they were using to haul themselves and the supplies and trade goods they’d need to stay alive up an uncharted river through arguably hostile territory. Worth a stop, and reminded me of all the good parts of period re-creations. 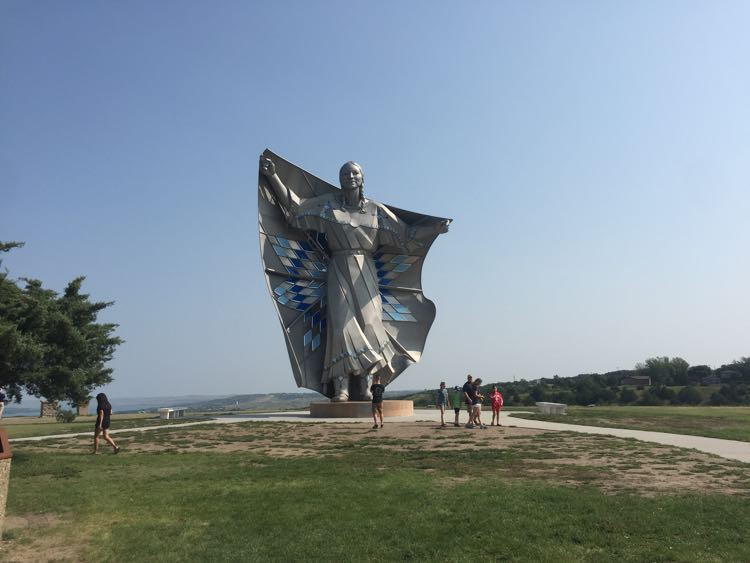 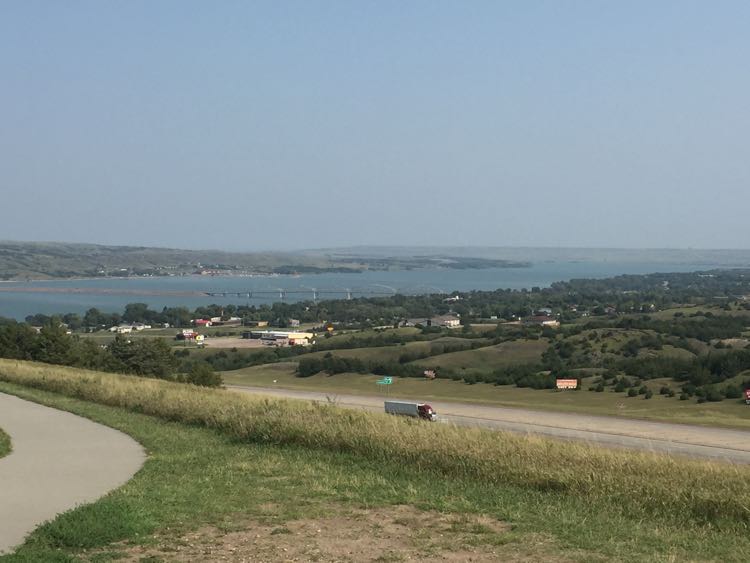 Corn and soy, corn and soy, corn and soy… East of the Missouri River, the land gets more textured, trees appear in great and great concentrations, and everything just seemed greener, fresher, more worked. An hour past the river I needed gas, so decided to stop in Mitchell, SD to see the famous Corn Palace. I got off at the wrong exit, but the Giggle Lady quickly routed me back to downtown. At a stop sign, I paused to let 2 old tractors go by, and seeing a wide gap, I turn onto the road behind them.. I didn’t mind going slow, its a pretty town. I looked in my mirrors and saw that hey, there’s another tractor behind me… in fact, there’s like, 15 tractors behinds! What the…

…and that, children, is how Aunt Kerri joined the Antique Tractor Showcase Parade at the 2018 Mitchell Corn Palace Festival!

I waved at some kids and blew the air horn once, but knew I was in the wrong place, so when I found a good place to park I definitely pulled over. I walked over to the Corn Palace for some photos, some fair food (mini fudge donuts.. and I just now realize how many minidonuts I ate today!) and chatted with a woman organizing the festival stage. Heading back to the bike, I bumped into a couple old farmers looking at my bike. Turns out they were driving a couple of the old tractors, and laughed about my inadvertant participation. We chatted about farming, raising corn, old tractors.. great guys, reminded me of my grampa Miller. 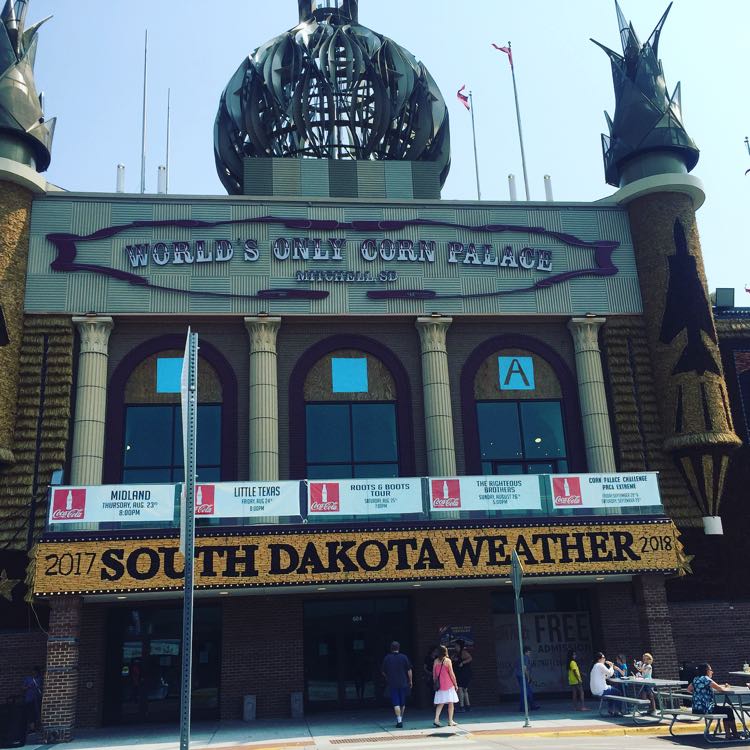 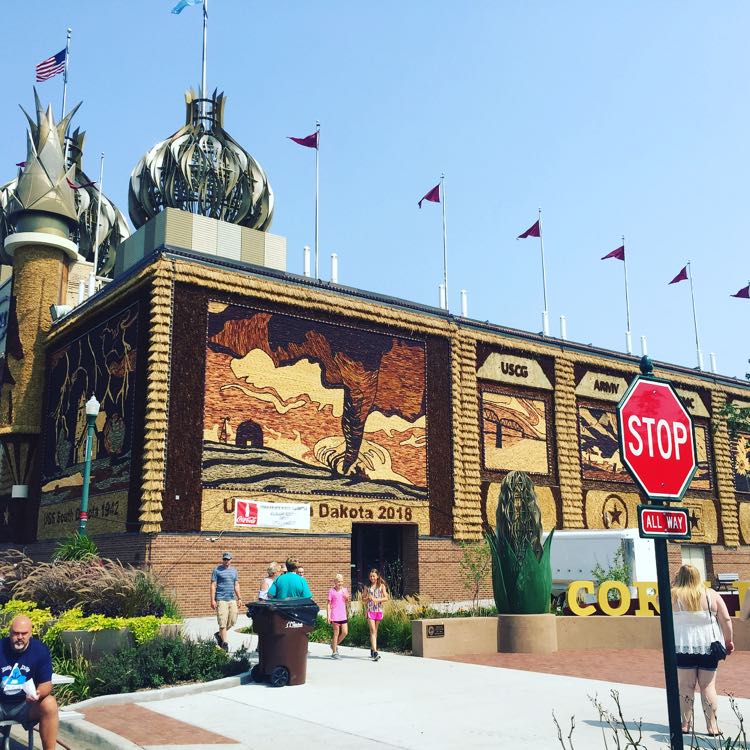 Lots of pro-military imagery in this year's version 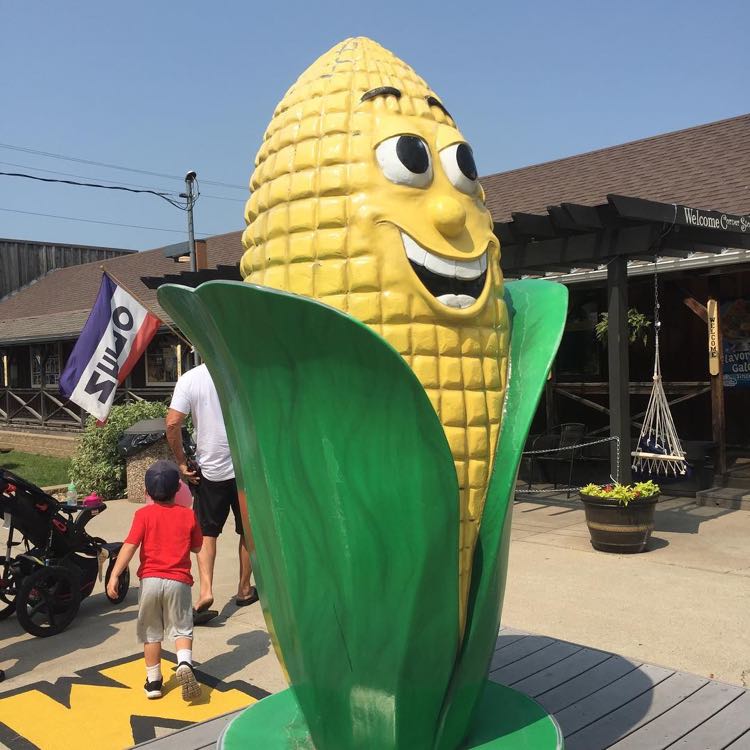 Back at it.. a little over an hour later I stopped in Sioux Falls to see my friend Matthew, who I met years ago at a conference in the Bay Area, who I’ve stayed in touch with on the Internets. Super nice guy, I met his wife Jen as they were setting up a booth for the Sioux Falls Night Market. She does some really gorgeous stuff with.. watercolors? Enamals? Whatever, I hope she gets an Etsy store or something and I can buy a couple things. :)

I didn’t stay long, as they were busy and I needed to get to Pipestone, MN before the Pipestone National Monument closed. I took a photo of the actual falls on the Sioux River; sadly I got my thumb on the lens and the fingerprint made it all blurry, which I didn’t notice until now. Booo…

The ride up to Pipestone was gorgeous, finally getting off the ribbon of I-90 and seeing actual homes and farms. I hadn’t heard of Pipestone NM until researching for this trip, but its a small area where Native Americans have quarried for pipestone, a hard, red stone used for making ceremonial pipes. They’ve been at it for more than 3,000 years, and the tribe that controlled the area, realizing the whites were going to flood through, quickly gave up most of their land in exchange for exclusive rights to the quarries. It was made a National Monument in part to protect it, and the visitors center featured the usual interpretive displays and movies, but also had crafting space for the artisans who actually carve the stone itself. I chatted with one carver (mason?) for a bit, finally having to leave because they were closing up. I got my stamp and headed out to the parking lot to figure out my next move. I had a vague “keep heading east” idea, of course, and it looked like 2.5 hours down the highway was a KOA campground that was cheap, had wifi, and an empty tent spot, so off we go!

The road was straight, the speed limit a now-pokey 70mph, and the country just endless corn, soy, corn, soy, corn, town, soy, corn… I was getting tired by this point, having eaten.. well, pretty much nothing all day. I stopped at a rest area, snacked on some peanuts, refilled my water bottles; I have a tendency to get dehydrated on these rides, which I won’t notice until 5am the next day when my legs start cramping, so I’m chugging water and low-calorie sports drinks pretty much all day long. I thought about stopping for an actual dinner someplace, but I was already going to be setting up the tent right at dusk, no need to push it.

The campground was nice enough, and while my site was just a random spot in a big, grassy area that needed mowing and didn’t have a picnic table, I’m pretty practiced in the setup/teardown procedure by now, they had wifi and hot showers. Of course, I had no place to SIT to use said Internet, but it was available! What wasn’t available was any food options within 10 miles, and I didn’t feel like tuna fish/oil/spices which is my “gross but delicious and healthy and keto” meal I keep stashed in one of my panniers, so I.. well, dinner was an ice cream sandwich and half a bag of Fritos. Don’t judge me!

Tomorrow I’m off to Effigy Mounds National Monument, and then Madison, WI and points east; I may skip Madison, as I can’t get a stamp in southern Wisconsin on a Sunday, but depending on timing I may try to get down into Chicago tonight - not a fan of traffic (or the tolls) but maybe I’ll make it, maybe I won’t, who knows.