Slept like a rock in a motel room that smelled of fake beeswax — I can’t describe it any other way, like someone had burned beeswax candles then sprayed beeswax-scented air freshener all over. The bed squeaked, the pumps of the salmon hatchery next door whirred all night, but I managed get get 5 or 6 hours of sleep. As much as I’ll enjoy my own bed tomorrow night, I’m really glad I’m no princess who needs her mattress to be just so..

The town of Port Hardy didn’t offer much for breakfast or coffee options, so I broke a rule and went to an A&W for honestly good coffee and a sausage egger. Half the town was in here as well, and I got an appropriate number of stares from fisherman and loggers who have a hard enough time with an amazonian amongst them, but one on a motorcycle? At 7am? Decked out in tie-dye? Hell, I’d stare, too, if such a unicorn wandered into my normal morning routine!

No opportunities for photos today, as the road jammed south through the woods. Thick forests, with the only real viewpoints being where they’d clearcut a section almost to the road. They always leave a buffer, roughly 20 feet of thin forest, so you can’t quite see the devastation caused by the logging, but its such a thin veil, like tiny bikinis that leave nothing to the imagination.

Stopped in Woos for my first refueling of the day, mentally marking several side roads that lead to the southern and western coast of the island for future expeditions. They all boast of fishing tours and lodges and resorts, so maybe I can come back and explore a bit. Every town claims to be the “gateway to adventure” or “nature’s playground” or something equally rugged and sporty, so why not find a KLR (or similar dual sport) with some knobbies and go blast around some ATV trails?

South of Woos, more gravel mines and logging staging centers. I have to pass log trucks several times, and none of them bother to help me out in any way (one even speeding up to match me! Thanks, pal!) I feel like one of those birds that picks scraps from the teeth of crocodiles, an insignificant creature hardly worth snacking on.

Campbell River, I stop for gas at the island’s least helpful gas station. Usually you just walk in and give them your card, then they turn on the pumps for you, but this one wouldn’t sell me gas until I had signed for a pre-sold amount, forcing me to guess how much I needed. “Guess high” was their not-at-all-helpful advice. Once you fill up, they expect you to come back in where they reverse the charge and then charge you for the actual amount. What a scam! They harvest the extra charge from people who can’t be bothered to come in for any pennies left over, and if you have multiple dollars, well there’s a soda right there, some chips, candy, and you’ve already spent the money.. Ugh.

While I was gassing up, I met Jamie, who had come up from Bellingham to attend Pride in Victoria yesterday, and was now scouting around looking for camping. She had an old VW pickup with a tall cap over its bed, and she’d been using it as a little camper. We talked about camping, my trip, etc for a bit, and I really wish I’d had more time and less travel-weariness to chat more.

Lunch at Duke’s, a diner that is both “sock hop 50s” and John Wayne-themed, which works in an odd way. They boasted about having the best fish n’ chips on the island, but I went for the pulled pork grilled cheese because “always get the special” won out, but judging by what the locals were ordering, I probably should’ve gotten the fish n’ chips… just for the halibut.*

Out of Campbell River the road is a 4-lane limited access highway, and I was miserable. The speed limit popped up to 120kph, so at least I could (legally) make time at the cost of fuel; The Morrigan gets ~45 mpg loaded, but that drops to ~39mpg when I hold the speed about 70. Miserable, ugly road, just straight and boring, very little scenery. I could’ve hopped over to the alternative, coastal route, which is my normal choice, but was just feeling grumping and ready to be DONE. Besides, this road had to get better, right?

Nanaimo flashed by, the electric ferry notice boards saying I’d likely be able to get a spot over to the mainland and Vancouver. Doing the math, I could /probably/ be home tonight by 9pm if I got lucky at the border, but I’d eat the cost of the AirBnB, and besides, this road just had to get better and I’d be able to enjoy the ride again, right?

Construction signs start warning of more headaches ahead, so I stopped for gas on the outskirts of Victoria, thinking to squat in the Tim Horton’s for wifi to see if I could route differently. I buy a coffee and of course their wifi is out, and my paper maps don’t have the resolution needed for navigating this part of the trip.

Then it started to rain.

At least it was a PNW rain, more a drizzly-mist than anything, just enough to make you think about rain gear, but not enough for you to feel that you’re actually getting wet. I’ll survive.

Construction, crowded roads, detours, and really aggressive city drivers. I get cut off multiple times, cars refuse to let me merge, and I almost got doored in a parking lot. Victoria, you’re a beautiful city, but this ride is miserable.

Finally got to my AirBnb, feeling defeated and done. The wifi here was rock-solid, though, and my host, Rehan, shared a wicked spicy aloo gobi he made with me, while we chatted. He was a former lead of some kind for Microsoft, working on PowerPoint, but we spent more time talking about my trip, his search-and-rescue work, etc. One fun wrinkle of this conversation was that his wife, who lives in Washington, DC and works for some kind of health care policy lobbying firm, joined us via FaceTime. I got the impression this was a normal part of their daily routine, and I wished I could’ve found the opportunity and asked for more details on how they make a long-distance relationship like that work, but alas I’m too polite. They seemed to just leave FaceTime on, only occasionally saying anything to each other - telepresence at its most chill, I guess.

Going to bed early, if I can. Tonight is my last night on the road, and I want to finish tomorrow strong, as I’ll have to navigate Seattle traffic around 5pm! 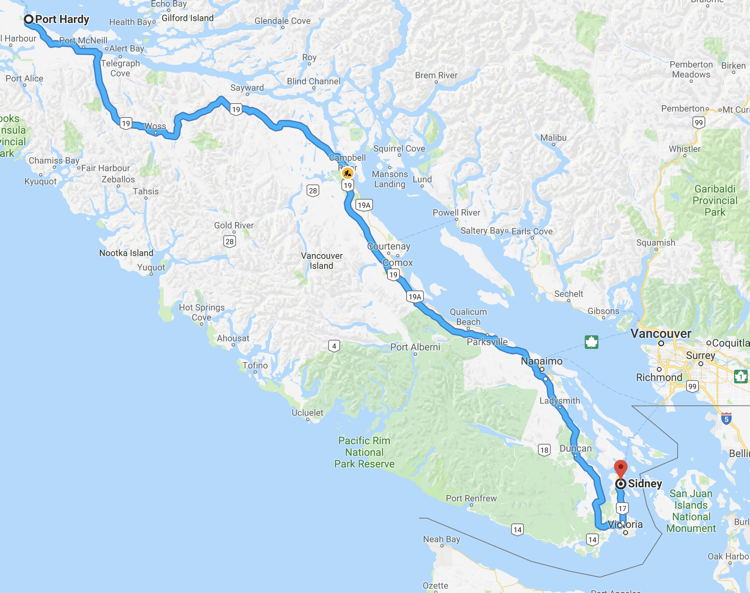