Nothing like waking up to the sound of steady rain, eh? 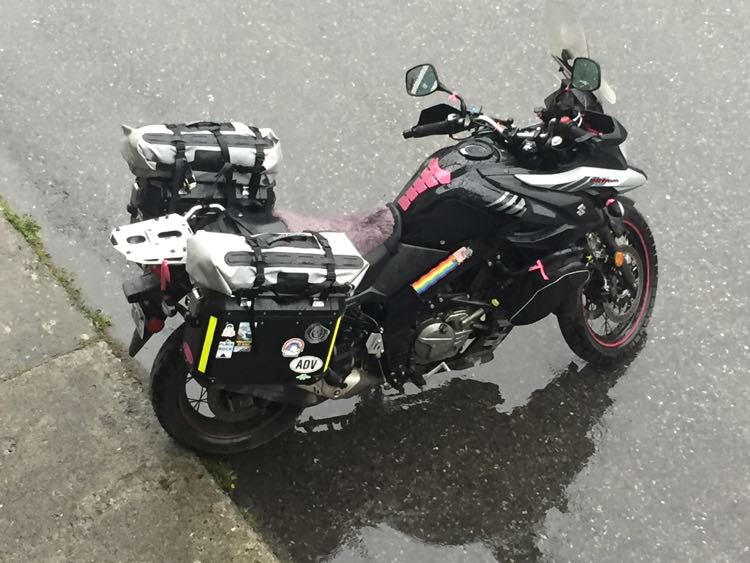 I must be back in the PNW, because its raining.

Today was about making time; I wanted to see how efficient I could be in my traveling by keeping my stops tights, my speed up, etc. Didn’t stop for really anything besides gas and a snack lunch.. well, breakfast. The bakery next to the hotel had a line out the door, which may or may not be a good sign, since it is the only breakfast place in town. I decided to see about making miles before eating, since I’m not usually terribly hungry in the morning, and its only 60km back to Meziadin Jct, where there’s a gas station/hotel/restaurant/repair shop (one of THOSE crossroads..) Gas was expensive and food options only “gas station snacks” so I opted for a banana and snack bar in the rain by the diesel tank. Better company, at any rate.

I stopped to adjust my music on the phone and the FI light dinked off. So glad I could “fix” that problem!

If yesterday was about the foliage “softening” then today was about it turning into “home”, as I crossed some fuzzy, invisible divide and ended up back in the Casciadia bioregion; I recognize the trees, plants, grass, vines, wildflowers, and smell of everything. I’m almost home! 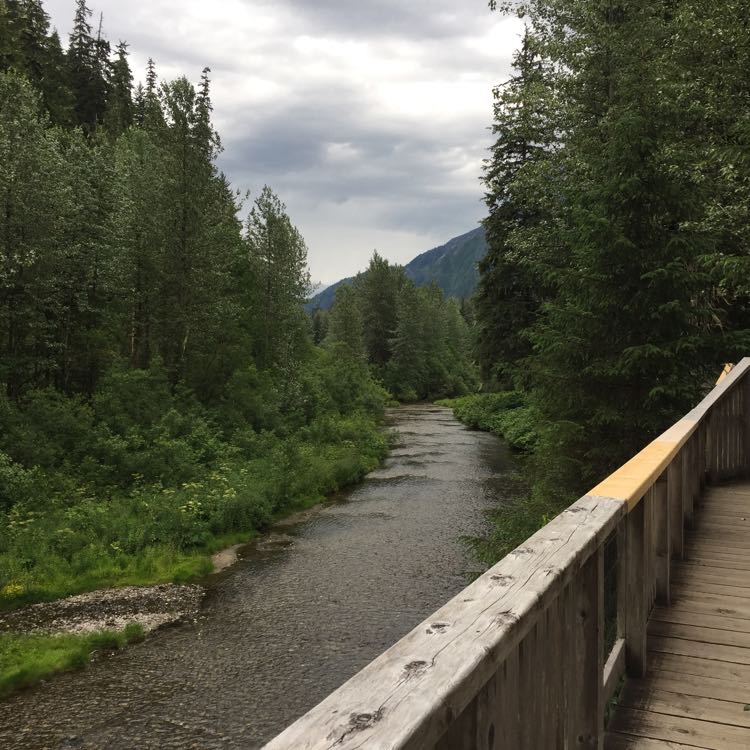 In Kitwanga, BC, BC37 meets CA16, the Yellowhead Highway, as it cuts from the broad valley of central British Columbia across the Coastal Range to the sea. Winding on the shores above western mountain rivers, we’re adding density now, with small communities always present; I doubt I was ever more than a mile from a landline.

Terrace, BC, is a hub city, with maybe 25,000 people in the area. I stopped for a coffee and snack, gassed up, and moved on. These towns are all different, but when they’re not my destination, they seem all the same somehow. Tim Hortons.. Walmart.. PetroCanada.. yep, next town! 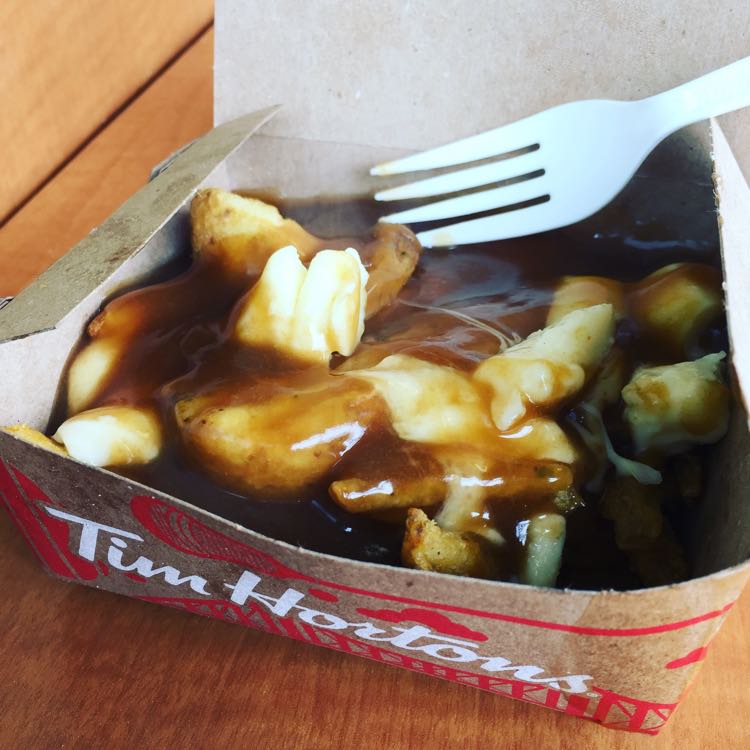 Out of Terrace we’re following closely one of the transcontinental rail lines.. and I do mean closely! Often only 10 feet or so between shoulder of the road and the rail bed, with no dividers… gulp! Still, a beautiful ride alongside the Skeena River. The rain does not let up, the fog never lifts, and I get to my hostel in Prince Rupert only slightly chilled, having made 282 miles in 5.5 hours.. counting gas, bathroom, and Tim Hortons break, that’s pretty decent. 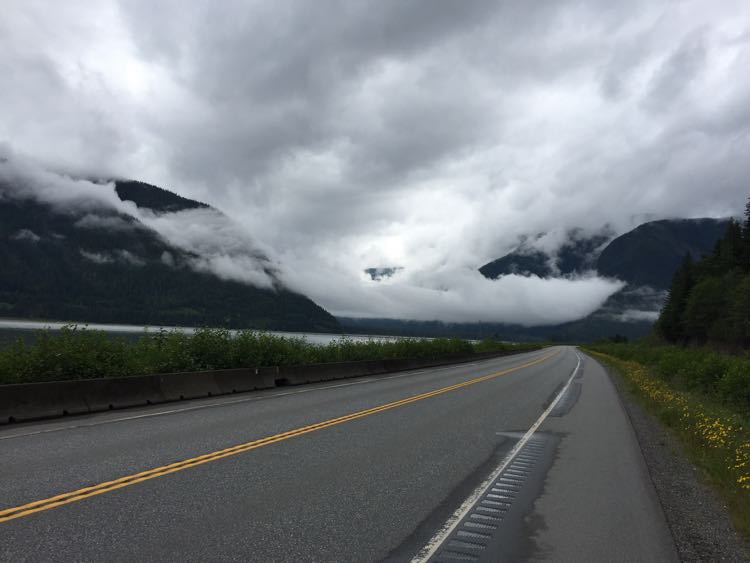 Taking a zero day tomorrow in Prince Rupert, where it is Cow Bay Days, a local street festival, and a couple museums I want to check out, but really I just want a break, after all, I rode 275+ miles a day for 11 of the last 13 days (and at least 125 miles on the remaining 2!) Sunday morning I catch the intercostal ferry at 5:30am, and get in to Port Hardy on Vancouver Island around 11:30pm. 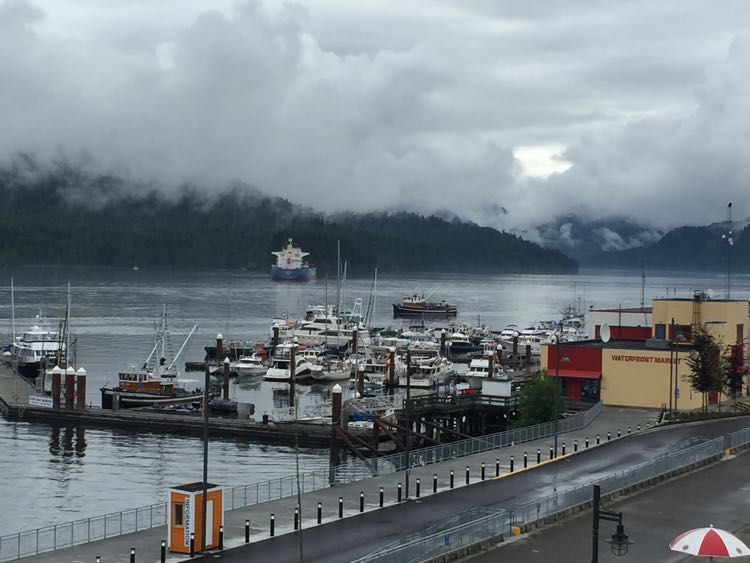 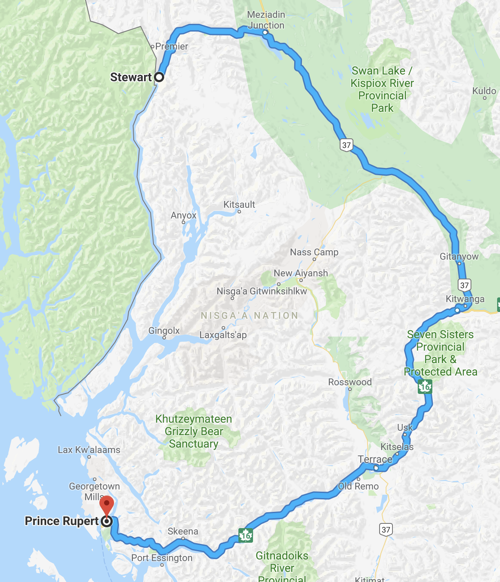