Some backstory… I rode up to Anchorage from Seattle to join a group of ASTOUNDING women on a guided tour of Alaska. All 7 of us (including our guide and support driver) are amazing, fabulous female motorcyclists, and I never thought it’d go nearly as well as it did. “A slumber party on wheels” was the goal, and while I couldn’t talk anyone into matching tattoos, we’re already discussing when we’re all meeting up to go riding together again!

Packed up from the tiny house I rented in Palmer, AK, for the AMAZING price of $40/night, and headed to my old standby coffee shop until I could checkin at the tour hotel, a swanky waterfront hotel with its own floatplane dock, stuffed wildlife in display cases, and exposed wood on the walls. Cushy but full of “cruise people”, it has a kind of luxury that I haven’t really experienced on this trip so far, but not the hipster-swank of a designer hotel, just.. upscale normal? I don’t even know any more, I’m so used to camping, Motel 6s, and crashing in people’s garden sheds and cottages.

We all met up for drinks and dinner and stumbled around Anchorage for a bit, still in the early stages of becoming friends.. I mean, just because we’re a group of people who all share the same general interest/hobby of motorcycling doesn’t mean we’ll get along.. but early signs are good!

The next morning we pick up the bikes from MotoQuest.. well, we pick up everyone else’s bike, I just sort of mill around and try to be useful without getting in the way, since I’m riding my own bike and am all set, packed, organized, and ready to go - the practicalities of the day-to-day riding on this trip are habit for me now, like when you get to the middle stages of the Appalachian Trail and can bang out 20-25 miles a day like a machine without barely noticing. I am ready to GO! 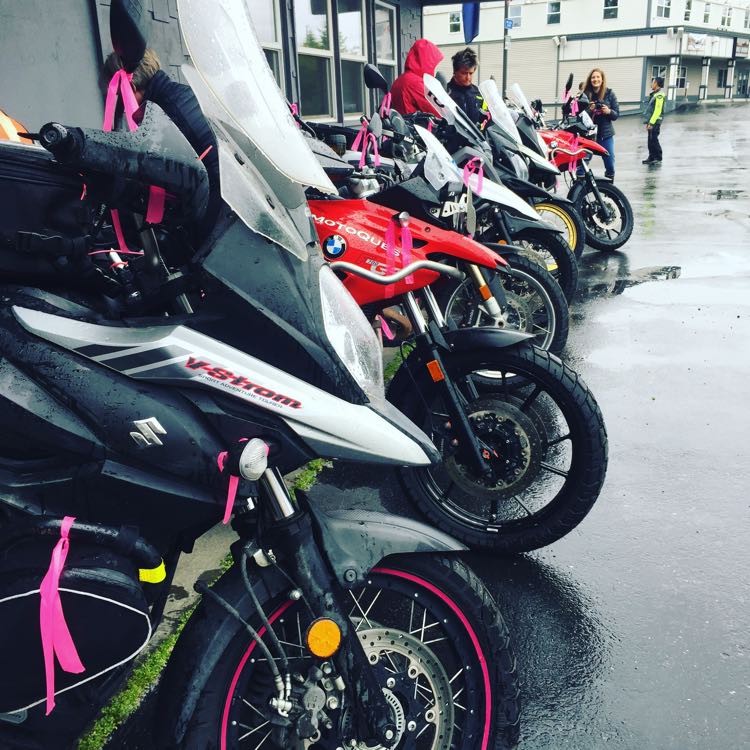 The Morrigan is so good at making friends!

Finally packed and organized, we’re off.. into Anchorage traffic. Its hard to say there are really traffic jams per se here, but its all a matter of scale, really. We thread out of town and stop at nearby Mirror Lake, a gorgeous park, to dial in gear, snack, potty time, pictures.. we’ll stop frequently, which is a nice change from my marathon stretches of burning across the Yukon.

We get off the highway and take the Old Glenn Highway along the south bank of the Knik River, the back route to Palmer and Wasilla. We push on through the windy rural roads until stopping at the Iditarod Trail Race Headquarters for snacks (we snack a lot on this trip!) and for some snuggle time with the sled dog puppies, and then back on the road. 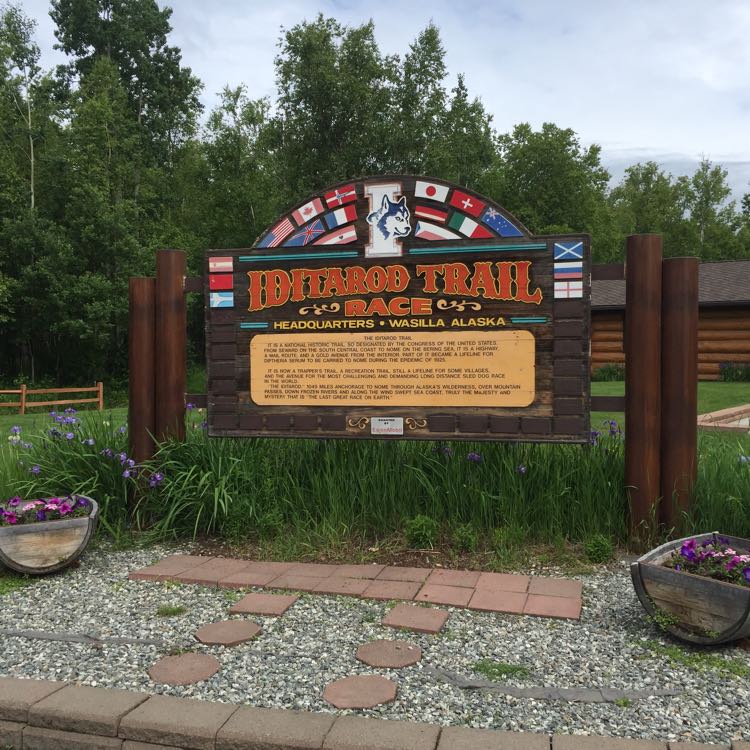 Our goal this afternoon is the town of Talkeetna, “a drinking town with a climber problem.” It is the home base for climbers attempting to summit Denali, and since they have to wait for a 2-week window of good weather in which to make the attempt, they spend a huge amount of time (and money) sitting around drinking and fiddling with gear in town. Bars, breweries, camping, gear, dispensaries, hostels, art galleries, Thai food.. Talkeetna has it all for you!

We all decided to splurge and hire a plan to fly us up to the Ruth Glacier on the southern flank of Denali, and while its fairly pricey, it was an amazing experience. Clay, our pilot, was exactly the kind of oddball I’ve come to expect and love in places like this. He’d migrated north from South Carolina 10 years ago on a whim, a one-way ticket in his pocket, $1,000 in the bank, and a pilot’s license on the wall, he flies 3-4 flights a day, 10 people at a time, tourists like us, hikers, skiers, workers and supplies for the remote (and expensive!) chalet overlooking the glacier. His plane, an aluminum De Havilland from the 1950s, leaks air, is unheated, and slides around the mountain currents, but we land safely on the large ski pontoons and deplane to foot-deep snow and glaring sun that turns us all into children. Snowball fights erupt and goofy pictures are taken, all in between moments of awe at the scale of time and power the glacier represents, inexorable nature. Denali itself hits behind clouds, as it does, and eventually Clay herds us back onto the plane and we return to Talkeetna. 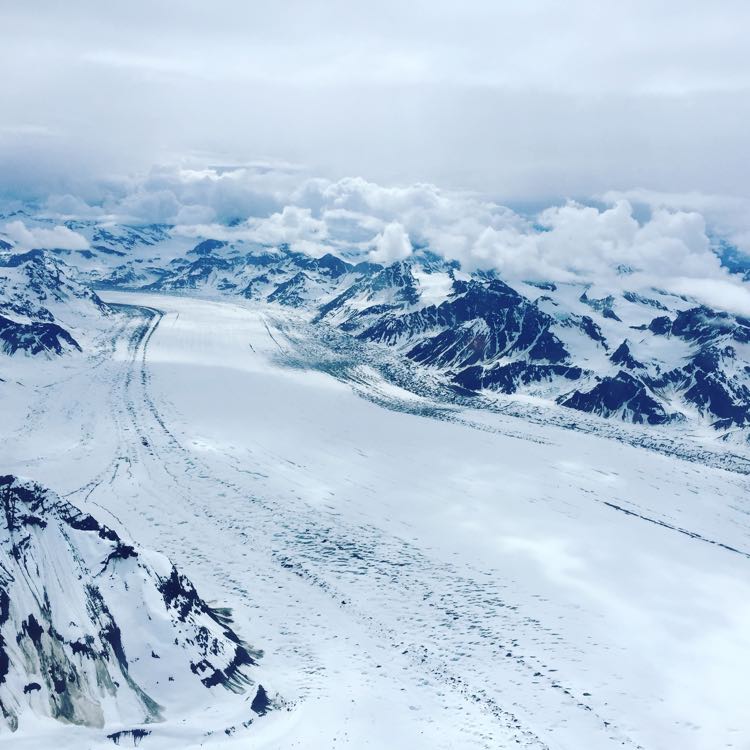 Deeper than The Grand Canyon.. 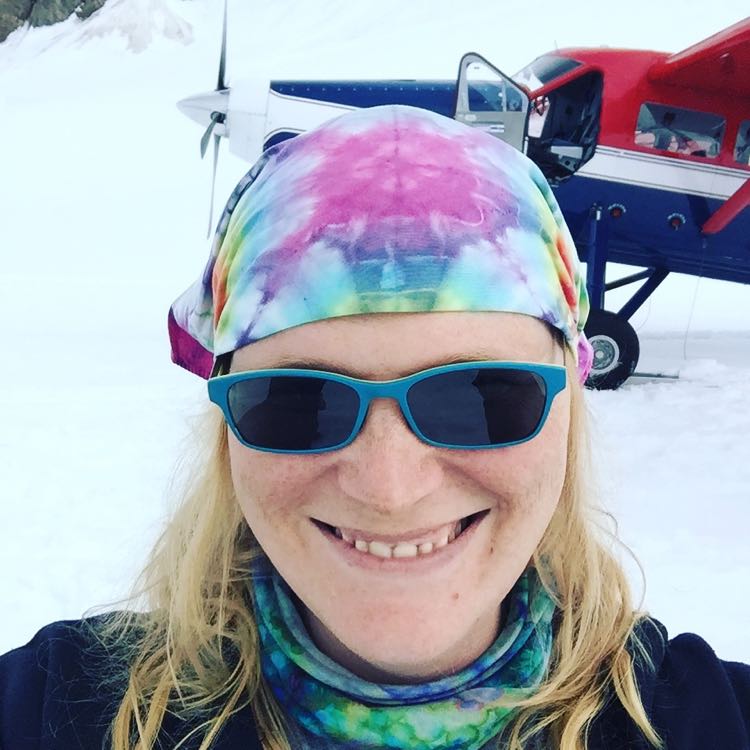 You flew here in that thing? You're braver than I thought!

Dinner at brewery of course, because everyone loves a pub. Afterwards we wander the town a bit, meeting the owner of a local hostel, trying not to get too wet messing around the banks of the flooded Talkeetna River, swollen still with spring melt, and then finally one last whiskey before collapsing into bed, a whirlwind day and a half of “pajama party on wheels.” 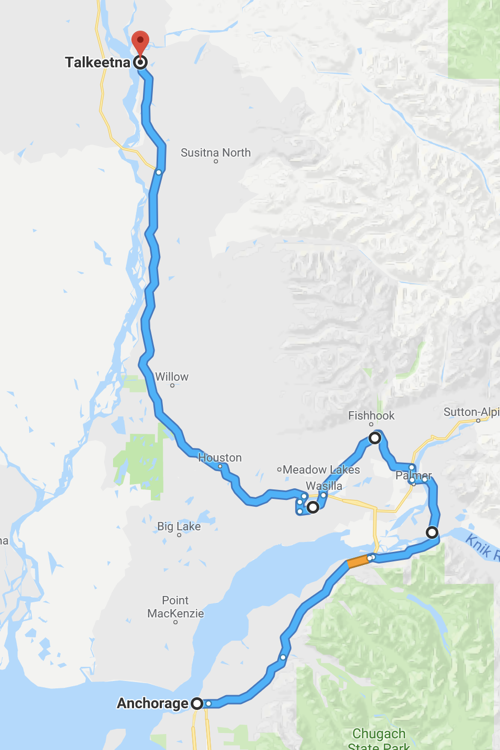