I had originally planned to ride 330 miles north to Dawson City, then head west over the Top of the World Highway, 100km of dirt and gravel that holds the distinction of the north-most border crossing in North America, then on to Tok, AK. A two day trip, but with weather forecasting rain and wind for the 2nd day (the day I’d be in the dirt..) I opted to instead head directly for Tok today, and hope for better weather in 2 weeks when I return. I leave Anchorage on July 1st, and don’t need to be in Prince Rupert until 7am on the 8th, and since its only a 4.5 day ride from Anchorage, I have enough flex in the schedule to add a day for it, and it’d mean less repetition in my return route.

Climbing out of the river valley away from Whitehorse, the long, straight stretches of Yukon highway return. Little wildlife to speak on, other than the RVs; I seem to find every cluster of slow RVs and 5th wheels chugging their way west. I pass them when I can, and often can do so without breaking the speed limit! I got stuck behind one particularly slow fellow in a 10 mile gravel section, by far the longest such stretch on the Alcan this year. It wouldn’t have been so bad except for the driver of the RV insisted on going no faster than 15km, slowing to 5km at some points, forcing me to slow almost to a stop several times.. and this wasn’t just hard-packed dirt with a skittering of gravel, this was gravel, loose and slushy under the tires, I needed to keep a certain amount of speed and momentum to keep from sloshing completely out and down at a few points, and going so slowly, trailed by a dozen frustrated vehicles, it was a bit stressful. I finally gave up and made a break for it, feeling like a speed demon to buzz past at 30kmh!

Finally the gravel ended and we returned to pavement, thank god, just as the first glimpse of the coastal mountain range rose up in front of me, a massive white wall of ice and snow. Breathtaking and dramatic change from the other mountain ranges we’ve crossed, these are powerful mountains, mountains that don’t fuck around, young, powerful, hungry. They rise up at the edge of the continent and force everyone and everything to make the choice - stop, go back, or go around. 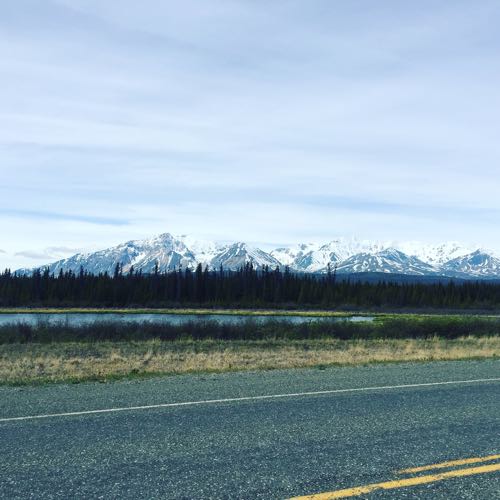 The folks that stopped live mostly in Haines Junction, an outpost of motels, gas stations, small eateries, and rental cabins. Turn left and head south to the United States and Haines, AK, turn right for more Yukon and eventually the Alaskan interior. I refueled with the obligatory cinnamon bun and coffee, then headed north again, where I found myself almost immediately the only vehicle on the road, leaving the RVs behind. No one travels this section of the road without a reason — there’s almost nothing along this stretch between Haines Junction and the border except empty state campgrounds, hunting and fishing lodges, and outpost tribal communities serving expensive gas and even more expensive snacks to travelers who will never stop otherwise.

Along the shores of Lake Kluane, not having seen any human structure besides the road itself for miles, I spotted a bear. I mean, yawn at this point, it’s like the 20th-something bear I’ve seen, but.. hang on, usually I spot them MUCH earlier, an inky black against the fresh green grass and foliage along the sides of road. This bear is… brown? …and shaggy?

He’s busy trotting away from the road and I’m happy to let him. I slowed down a bit to get an eyeful, but kept going, rounding the lake and doing a little dance - trip achievement unlocked: see a grizzly without being killed! 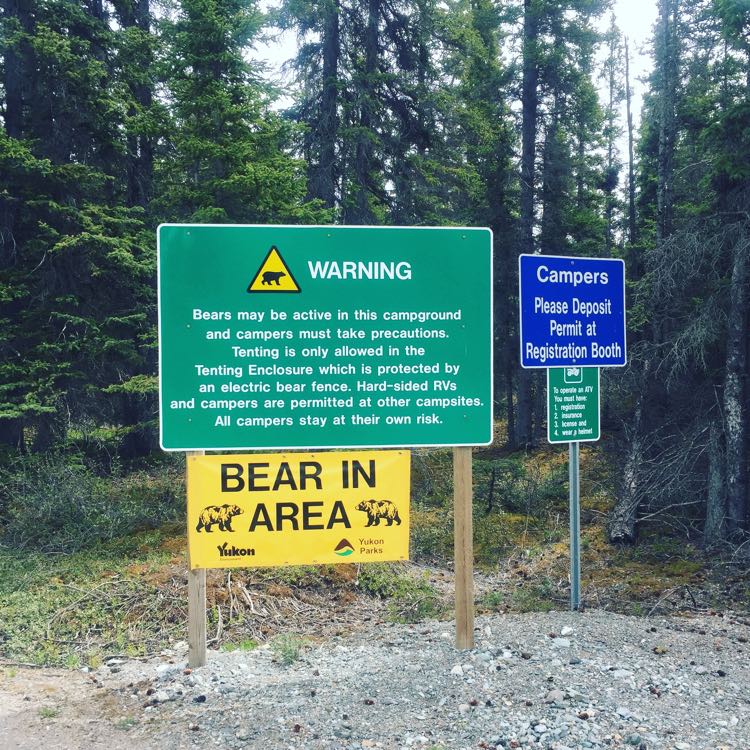 I agree! Campers SHOULD be held inside electrified pens!

The land around Lake Kluane thinned out and turned rocky and poor, and I noticed for the first time how dry and brown everything looked. Grayish-tan sedge grasses, dead and withered along the road, few trees to speak of, tangled undergrowth and bushes, still in early leaf. It isn’t summer here, it is still spring, and we’re in the rain shadow of the coastal range. I’ll take it, it means not having to be cold and wet today!

I stopped in the community of Destruction Bay for the aforementioned expensive gas, and continued north. The countryside soon turned from the yellowish, chalky Yukon soil, ground down limestone shoved into heaps by the glaciers, into ever more rich permafrost, a black, mucky-looking loam supporting the taiga, the northern boreal forest, poplar, birches, thick stands of stunted spruce whose trunks are so dark they appear black, with dark, dark green branches and spreading growth clawing at the air. 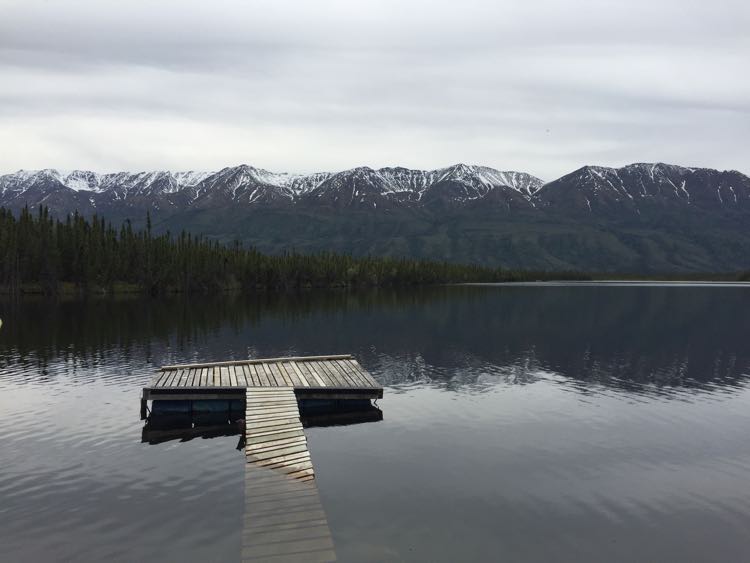 A truck flashed his headlights at me, and I grumped “hey buddy, of course I have my high-beams on, I’m on a motorcycle I get special treatment!” only to be surprised topping the next rise to see a stopped car and a grizzly momma bear and her three cubs. I gave them PLENTY of space and pulled over to watch. As I was taking some photos, a couple trucks pulling boats and a passenger car passed me and pulled up RIGHT NEXT to the bears, who honestly could’ve cared less. The cubs started sniffing around the car as the passengers (Americans from Minnesota) shrieked and rolled up their windows. Two of the cubs climbed up on the hood of the car and started sniffing around, and instead of, I don’t know, chilling out, or honking the horn or something, this yahoo throws the car into gear and hits reverse! The cubs scrambled and spilled to the ground, rolling out of the way, and the car took off, leaving the rest of us with an “Oh shit…” moment — what would momma do? 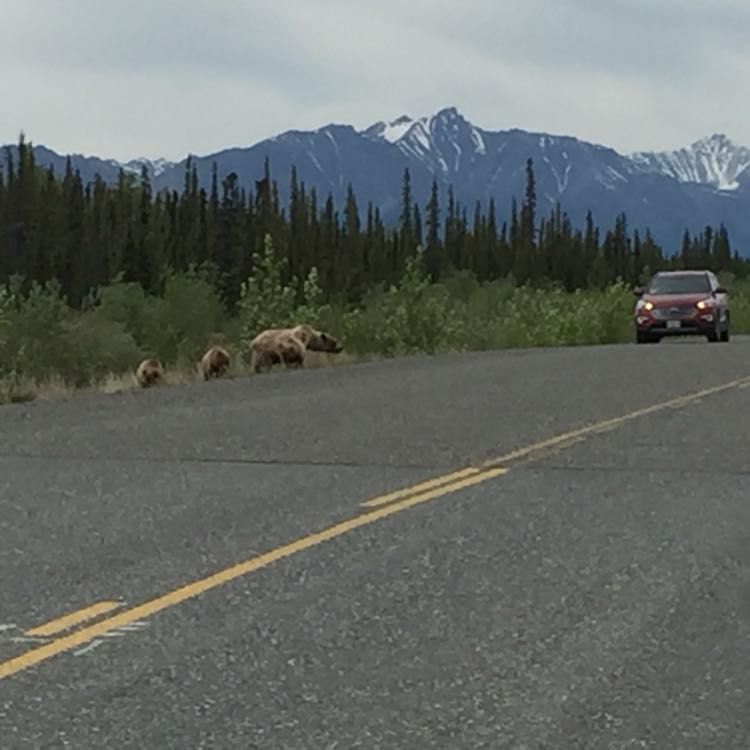 An iPhone is not the best camera, sadly

Well, turns out, momma didn’t give a shit, and she and the cubs just went back to eating. I guess this is just a normal day-in-the-life for a grizzly who hangs out by the side of the road! I decided it’d be a good time to leave, regardless, and slowly put the bike into gear and passed them on the FAR side of the road. I never did catch up to that car, but when I stopped in Beaver Creek, the westernmost community in Canada and the last town before the border, the woman running the till at the gas station asked if I had seen the “idiots who got their car scratched up by a bear.” She shook her head and all but said out loud “stupid Americans” — I commiserated about people who don’t know how to behave in the woods, and we talked a bit about her life story.

She was 31, covered in tattoos, a Vancouverite who decided to move north to see what was up here 2 years ago. Goth-looking, she said she liked the hours, sleeping in a small room right behind the store area, on call 24-hours a day for 3-4 days at a stretch. “It isn’t so busy, I just watch TV and nap, and then I get 4 days off!” Her room and board covered, she’s making great money, and given that there’s no other stores here, no one delivers here, and its 5 hours to the nearest Walmart (in Whitehorse) there’s almost literally nothing to spend her money on. She’s heading to Mexico, next, and as she has family that own a farm somewhere down there. We talk about Baja and motorcycles and I relax for half an hour on the porch, but I really have to get going…

Crossing at the border were the usual questions - are you alone? Aren’t you afraid? What kind of job gives you this much vacation time? I’m kind of sick of it, but its a game, you smile and act comfortable, /slightly/ bored, /slightly/ nervous, and just be honest and open and obvious and clearly not smuggling in.. I don’t know, refugees or recreational pot or Kuegerands or something.

The road immediately changes from rough chip-seal to smooth, soft asphalt.. in spots. The road from the border all the way to Tok was horrible, easily the worst I’ve ridding this entire month. Unrepaired frost heaves, tar snakes patching the small cracks, pot holes, random ridges in the middle of the lane, subsiding pavement.. embarrassingly bad. Canada keeps their section of the road in good repair, and the “Welcome to America!” you get from this road truly is an expression of “we’re America, bitches!” Horrible and sad.

The difference between the roads wasn’t the only sign I was in America. Road signage suddenly became much poorer, practically non-existent and when they were present, more likely to have bullet holes or be rusted to nothing. No more rest areas every 20-40 miles, just pull offs filled with trash. Ramshackle houses and power lines, sinking into the melting permafrost, covered with graffiti. It was ugly and shocking after weeks of tidy towns and thoughtful developments and beautiful scenery.

Tok itself was a lovely puddle of civilization, and I treated myself to a prime rib dinner at Fast Eddy’s. Spent the night at Thompson’s Eagle Claw Motorcycle Park, which caters specifically to motorcycle riders with smaller campsites, open camp kitchens, and even a shop to work on your bike. I chatted with a guy from the UK who is doing an Alaska-to-Argentina ride, got ignored by a rowdy group of GS riders, and got a great nights sleep. Tomorrow I head for Anchorage, where I’ll be staying in an AirBnB for one night before moving into a tiny house (!) for the remainder of the week. I need to source a new tire this week, and I’m also going to reroute my brake cables FINALLY to get the risers installed. 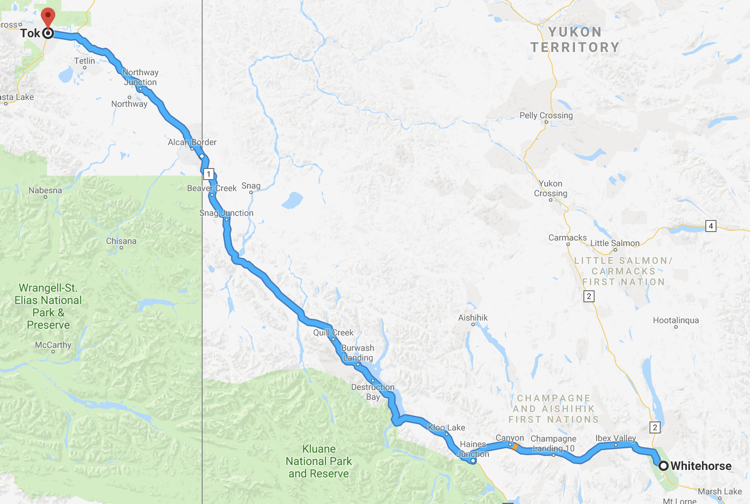