A sunny day proved reason enough to take off late one afternoon, heading south from where I was staying in Whitehorse, through its “suburbs” until the vanishing mailboxes seemed to say “ok, NOW you’re REALLY in the wilderness!” Occasional light drizzle and chill in the air, despite the sun, more the stuff of neighborly complaints than needing to gear up. The sandy valley floors continue south, crumbling road cuts exposing washed limestone boulders set in chalky, sandy soil, but the land is flat and predicable, making for an easy ride.

An hour south of Whitehorse, you come around a corner and see that you actually have been climbing the valley walls, as the road drops down towards the town of Carcross, so named because it was the place where the CARibou CROSSed a delta of mud and sand cutting a pair of lakes apart. The road slips down the hillside, splitting apart two other lakes, Emerald and Spirit Lake, each a gorgeously pure mountain lake with bottoms of white chalky silt and sand. The scenic pullouts are crowded with rental RVs, but I squeeze in for a photo. 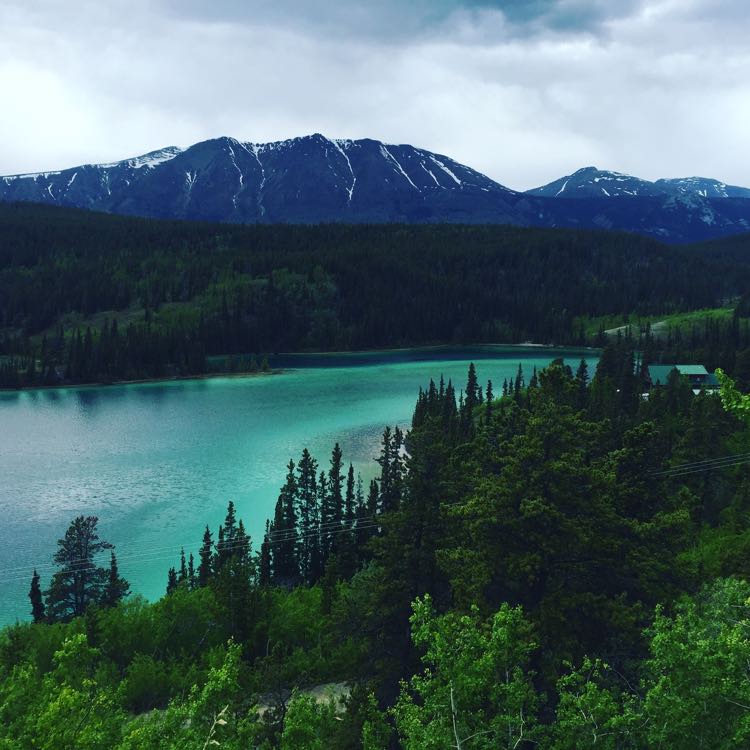 Right before you get into Carcross proper, the so-called Carcross Desert appears. Billed as “the world’s smallest desert” it is a one-square mile of rolling sand dunes, sand pines, and sedge grasses (some found only in 4 or 5 places in The Yukon and Siberia!) While not a true desert — the air is too moist for that — it looks for all the world like Tatooine, a landscape ready for an enterprising young nerd to stage a fan film of their own version of Star Wars, or their Lawrence of Arabia sequel. 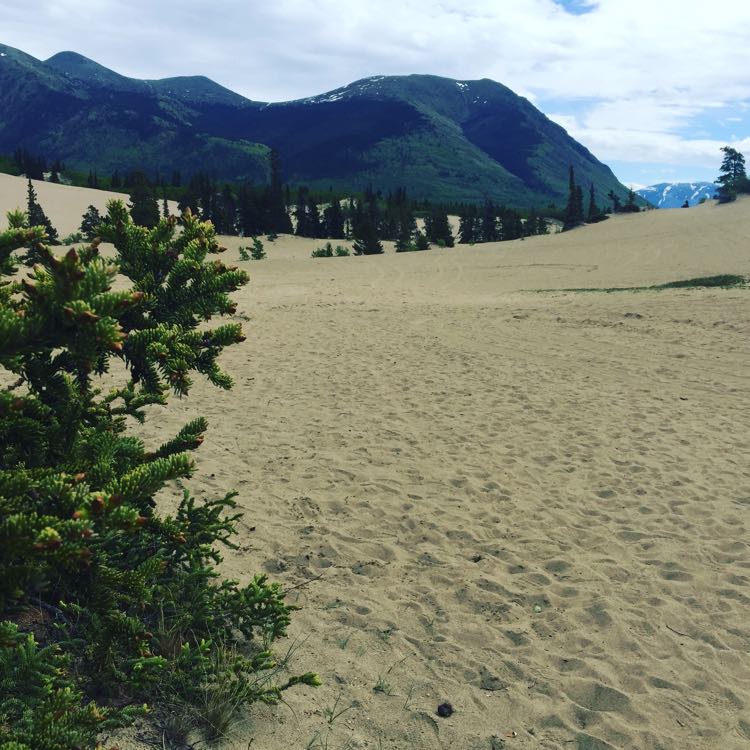 The remains of a glacial lake

This was also the spot where I saw the first of the vehicles I’d be dodging all day long, a minibus full of cruise ship tourists. It pulled in to the parking area and parked in my bike, so I had to wait for the driver to herd passengers on and get them started on their 15 minutes of structured fun before I could leave. I didn’t actually mind, as I noticed that I’d lost another bolt on the racks for my panniers, so I did a little roadside wenching; I’d wisely grabbed a handful of extra nuts and bolts last time I had to replace one of these, so they were in my kit. Hopefully a little loctite with help keep things in place.

The road follows the shore of a few different high-altitude valley lakes, the kind that look like fjords, with mountainside plunging right into the water. Traffic was fine, flowing along smoothly until inevitably you see a clot of minibuses congregating on the road ahead, which is your first sign of bear. Sure enough, every time I saw a car pulled off to the side on this trip, it meant there was a bear, and often a tourist who had gotten out of the vehicle for “that perfect shot”.. which honestly is good for me, it means that I don’t need to worry about the bear charging me on the bike when there’s a plump cruise passenger trying to Darwin themselves. The only time this failed to be the case was for the “Welcome to Yukon” sign… 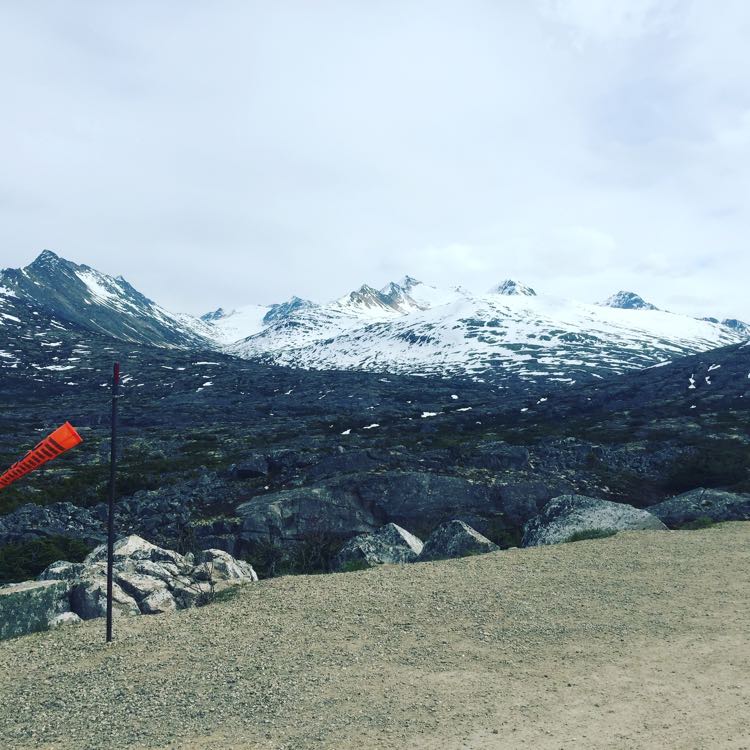 Not quite a moonscape, but close to it

The road turned to kilometers of dry, dusty gravel approaching Canadian Customs which, like its US sibling, is set well back from the border itself. Eventually we got back to pavement, and entered White Pass, which was fabulous, as the trees drop away to only those brave few who find purchase in the rocks and moss; there’s no top soil here in this wide valley, reminding me of Iceland. Crossing the US-CAN border was a non-event, a terribly scenic pullout filled with full-size tourbusses. We’ll leave them be, stopping only long enough to snap a photo before following the twisty, narrow mountain road as it dropped like a rollercoaster to the sea. I had a blast zipping down this road, only being stopped by a parade of rented hummers. 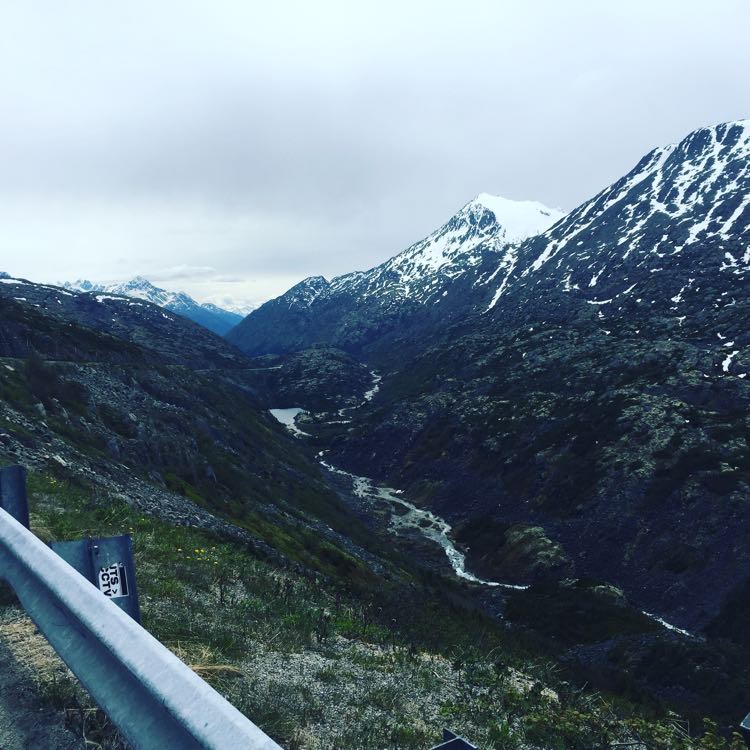 Standing at the US/CAN border, looking down the valley towards Skagway

Skagway itself was nice enough, although there were 2 cruise ships in town, and everything, which somewhat scenic, is completely devoted to the new gold rush of cruise dollars. I went to the bar at the furthest end of downtown and managed to squeeze in to the bar, chatting with the bartender over a beer about the cruise trader, her time in Vancouver, what its like to work summers in the north, etc. Apparently Skagway gets something like 10 ships/week, at least one a day, disgorging thousands of passengers each day into their streets. Oof.

I finished lunch, bought a horrible cinnamon bun and a dreadful coffee (neither worth finishing!) and headed home. Canada let me back in, thankfully, and I headed back to Whitehorse at a good clip. Stopped in Carcross for fuel, and made it back to the apartment just as it started raining for reals. I noticed at that point that all the gravel and dust had taken a toll on the bike, which had spring a leak in one of the front fork seals, but that’s another adventure for a day where it isn’t streaming ice water from the sky.