You know you’re in trouble when the first heavy drop of rain smacks you on the one spot where you didn’t zip up your jacket, a cold wet pebble that runs down your chest to your belly, chilling your core. Welcome to the prairie.

I got a late start out of Prince George today, on the road at 8:30am. With 400ish miles to cover today, I wanted to make as much time as I could. The rain last night was steaming off the hills, a thin fog filling the Frazier River valley. Fueled by a banana and the last few coconut biscuits I brought from Seattle, I stopped for gas in the last bit of chain stores, and within a few kilometers I was in the wilderness, winding The Morrigan north. 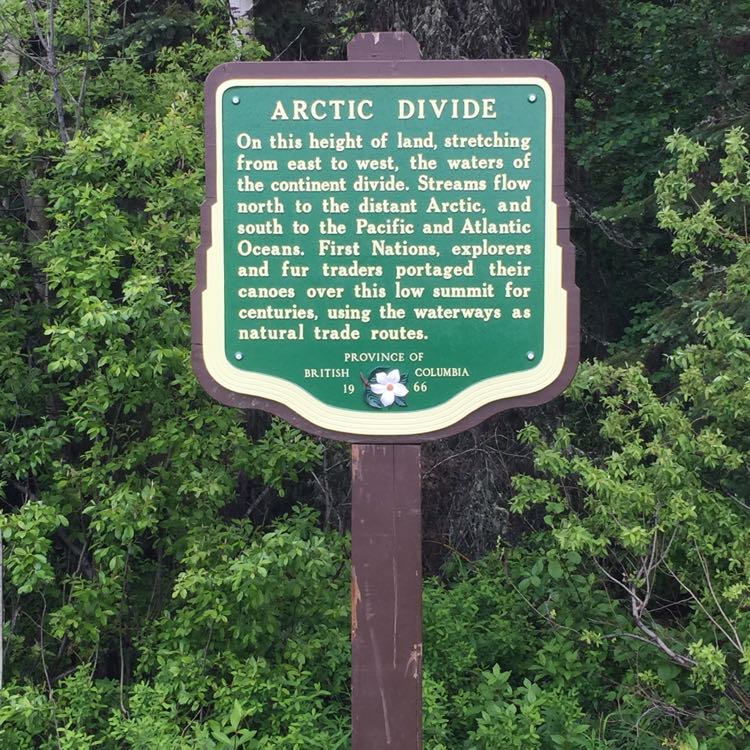 Its all downhill to the Arctic Ocean!

I stopped about 100 miles north, after crossing the Arctic Divide, then on to Parsnip River, for gas and caffeine, coming out of the store to an orange BMW R1200 piloted by Don and Vicki, a wonderful newly-retired couple from Palmer, AK, heading south to Montana to visit family. They were full of questions about the new VStrom 650, so I spent a delightful half hour swapping bike comparisons with them.

I need to get a business card with my email on it for when I meet people! 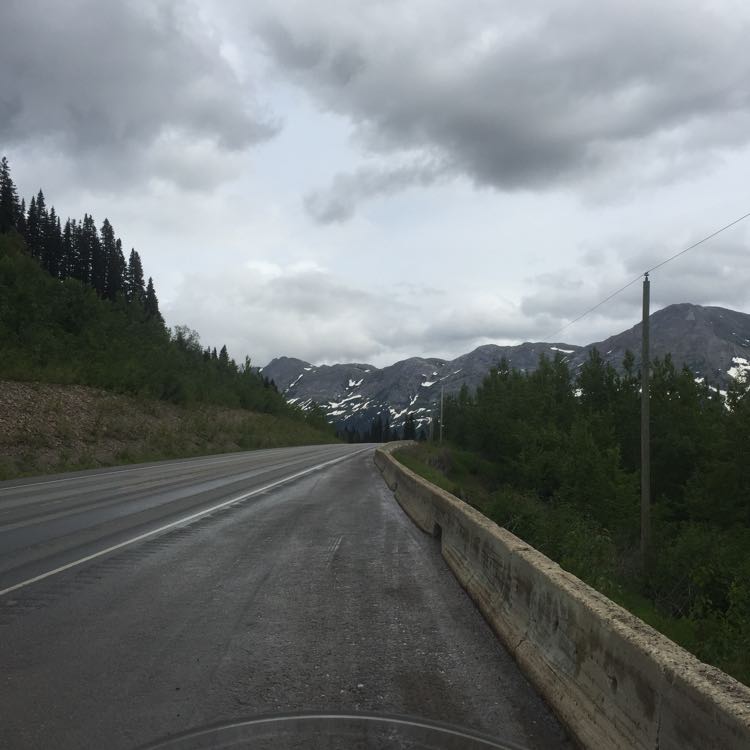 Pine Pass, in the Canadian Rockies 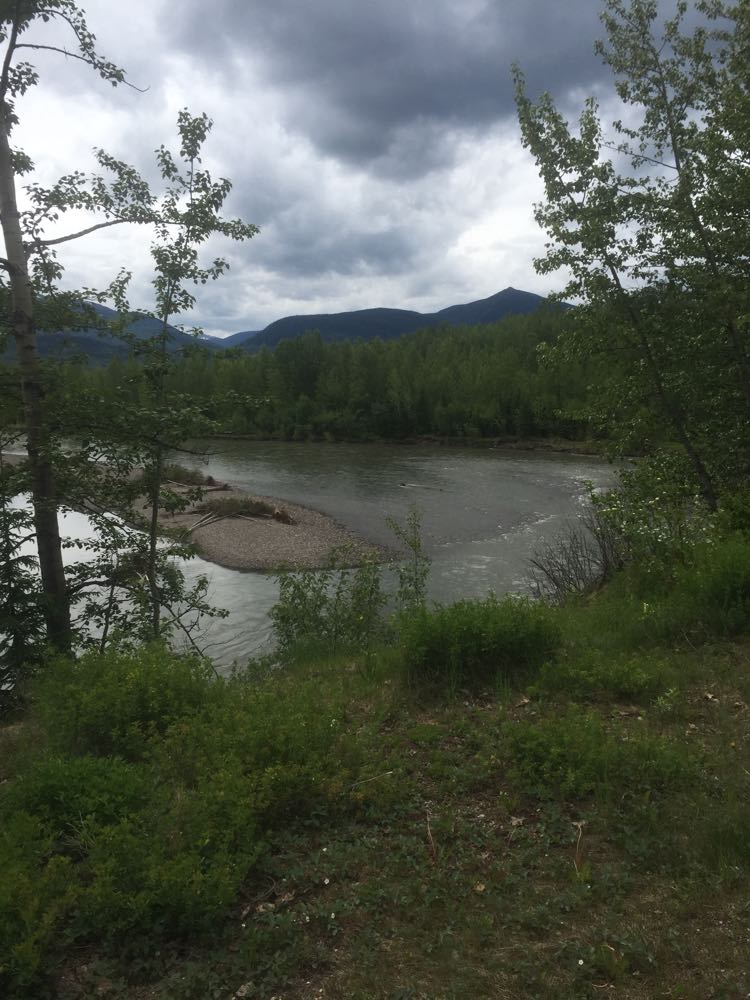 The Pine River, outside Chetwynd

The terrain after Parsnip River winds up into the Pine Pass, where I slip across the Continental Divide and a time zone, rolling into the town of Chetwynd. On my map of BC there is a tourist attraction in Chetwynd marked merely “Chainsaw Carvings” with no explanation, so when I saw a pair of intricate and whimsical statues by the “Welcome to Chetwynd” sign, surely I’d seen the sights.

How wrong I was!

The road into town is lined with dozens of carvings, of all sorts. Sure, the usual lazy bears, howling wolves, and screaming eagles were represented, but so are scifi villains like the Predator, fantasy-themed scenes, hockey players, indigenous themed carvings… and a pair of rutting turtles. 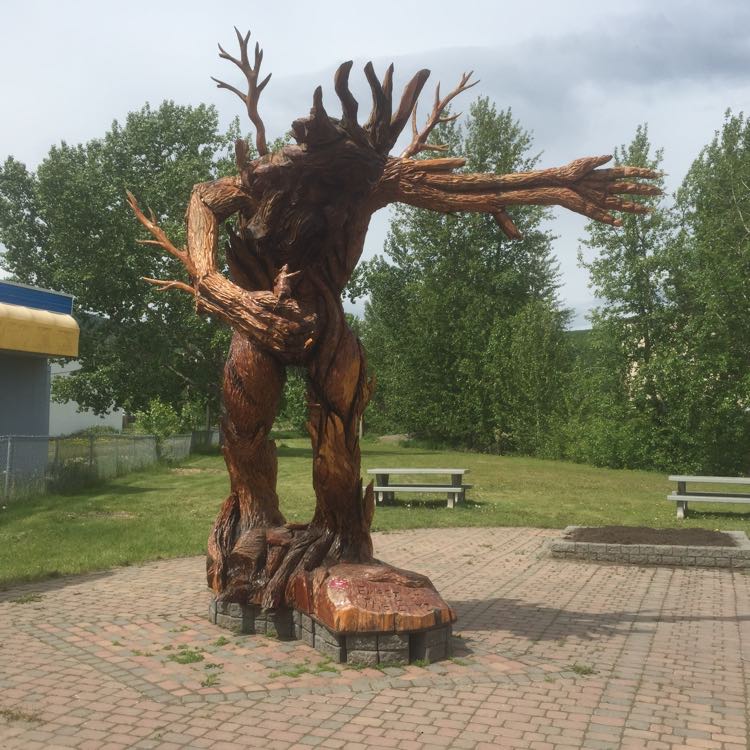 One of my favorites, an Ent and a small mouse friend. 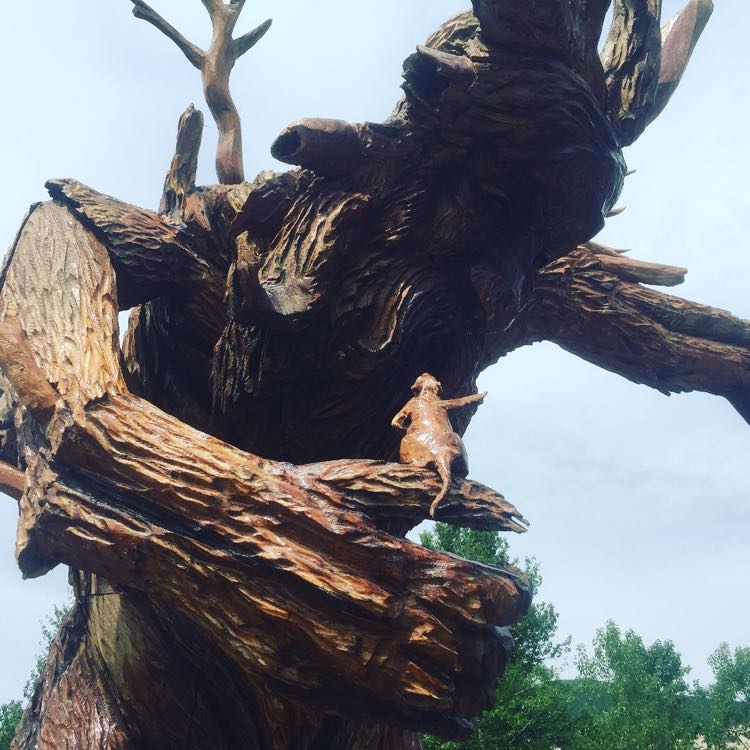 What story is unfolding here? 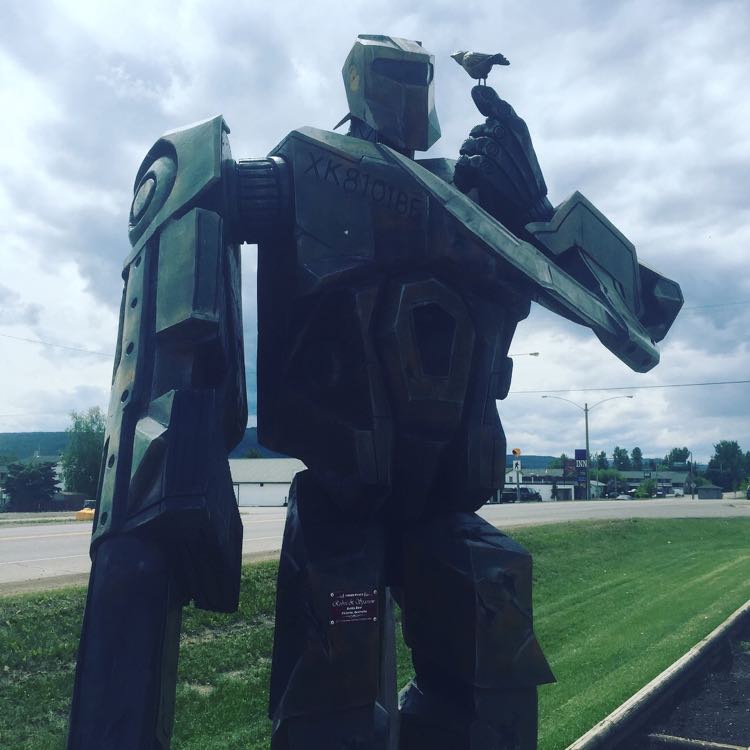 This might be the only chainsaw sculpture of an Overwatch character

Small sandwich board style signs in town advertised “Carving Today” and I assumed a local carving gallery was having some kind of open studio, but when I spotted the food trucks and pavilion tents in a city park, I made a quick u-turn to attend the 2018 International Chainsaw Carving Championship! 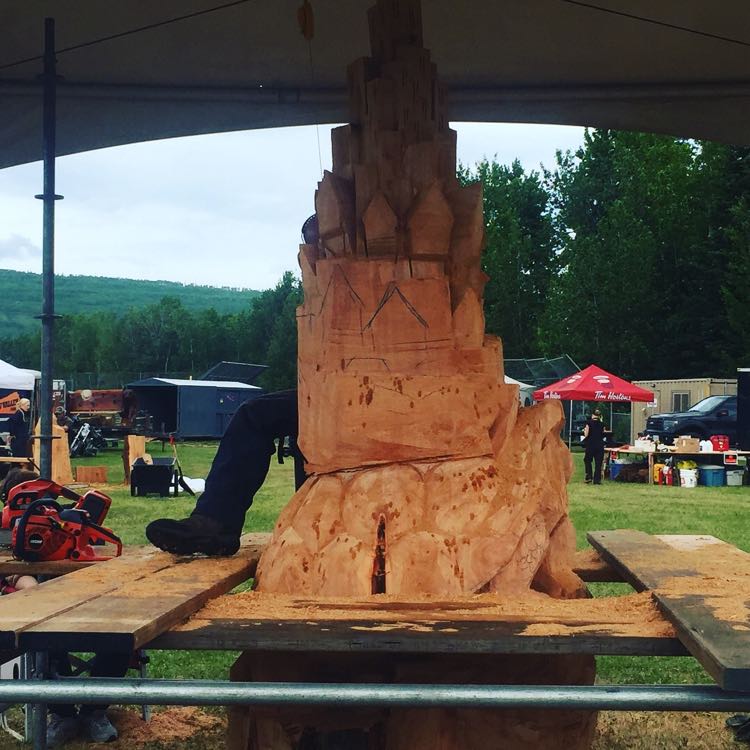 A fantasy city perched on the back of a turtle 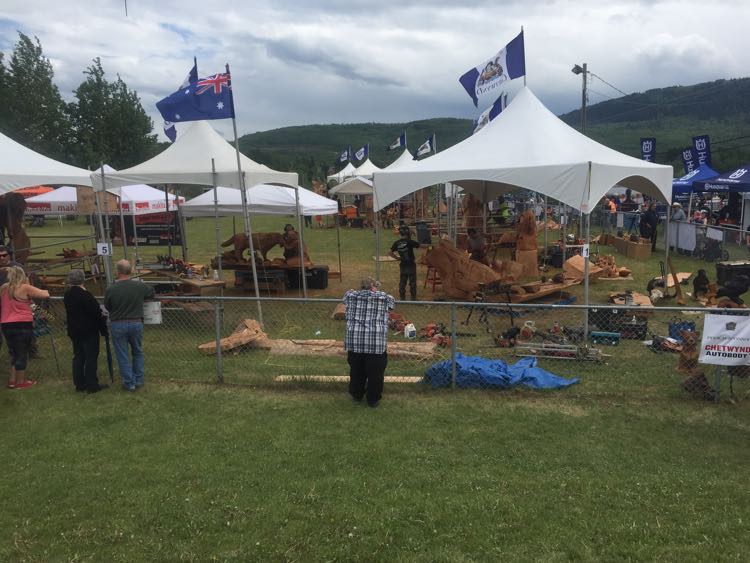 I spent an hour watching 14 different artists from Canada, America, Slovenia, Ireland, Japan, and Australia as they carved whimsical creations. I grabbed a small pizza and a coffee from one of the local food trucks, and pushed on toward Dawson Creek and Mile 0.

20 minutes later, the first rain doused me. I’d been eyeing dark clouds to the north and south on either side of the highway, but Mother Nature was quicker than my 650cc. I quickly pulled over to don my rain gear, but by the time my jacket was on I was already soaked through. The rain came down for another 20 minutes, as I sped on, but soon I peeled away from the storm front, leaving it behind me as I entered Dawson Creek.

Dawson Creek is, unfortunately, not a town I ever feel I need to some back to. I took some photos of the iconic Mile 0 sign, put a sticker on the modern road sign, and went to find coffee in this run-down, ramshackle town, where everything is coated in a layer of silt and mud. This entire region is farming and gas wells, so endless big trucks and tractors, dirt roads and digging, the air is clogged with dust and diesel, gas flares burning off puffs of methane. Not a my favorite part of the world. 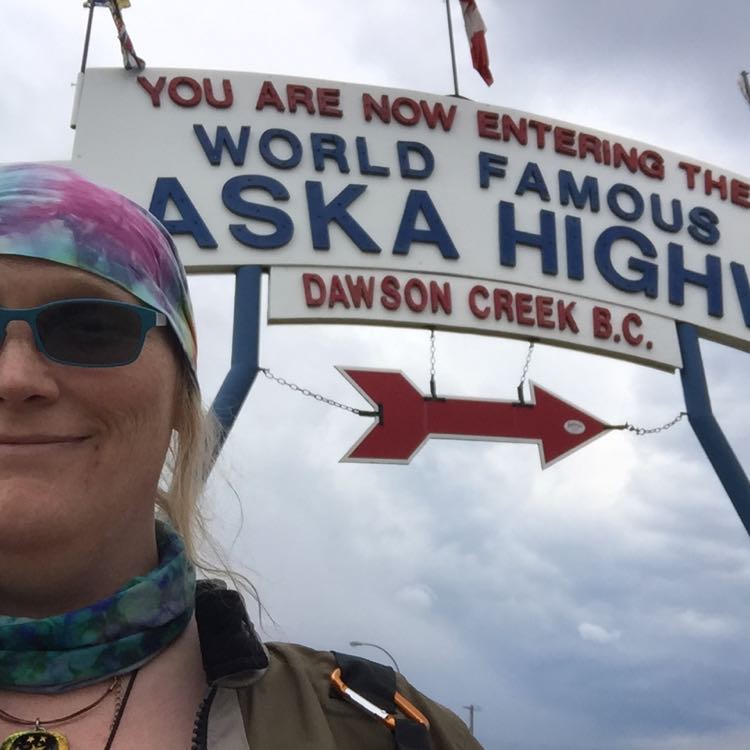 I had a coffee at Tim Horton’s and as I was loading back up, the rain storm caught back up with me. I was now heading north, as BC-97 makes a sharp left in Dawson Creek into a construction zone, the pavement chewed up and textured for future paving. The torrential cold rain combined with the gravel-sized texture of the road and the pervasive dirt to create 25km of the scariest riding I’ve ever done. The temp dropped from 17C to 9C, and I was soon soaked, covered with mud, the bike slipping and sliding all over the place, tailgated by bravos from Alberta in their angry pickup trucks. I pulled over several times to try and wait it out, but it was a miserable hour of bad conditions and scary riding.

I crossed the grated bridge into Tayler, expecting to stop at a store for grocery store grazing, but apparently it wasn’t open on Fridays, so on to Fort Saint John. Farms rapidly fall behind and were replaced by gas fields and refineries. I stopped at another Tim Horton’s (this is a trend on this trip!) to warm up and check my maps, when Dennis came up to tell me all about how expensive it is to be a carpenter and travel to Whitehorse to see his “friend who is a lady” and how folks just keep asking him for cocaine but he’s just a carpenter at the refinery and he used to have a Suzuki and he thinks I’m really brave and..

Well that conversation took 40 minutes, but he was sweet, and its always nice to chat (even if it does eat up a lot of my time!) With sunset at 10:02pm at this latitude, I’ve got plenty of time. I get back on the bike shortly before 6pm, and not 5km outside of Fort St John, there’s nothing. Not a thing. Its just like a line you cross and suddenly you’re on a straight ribbon of 2-lane, with 100 feet cleared on either side (to help you spot wildlife!) 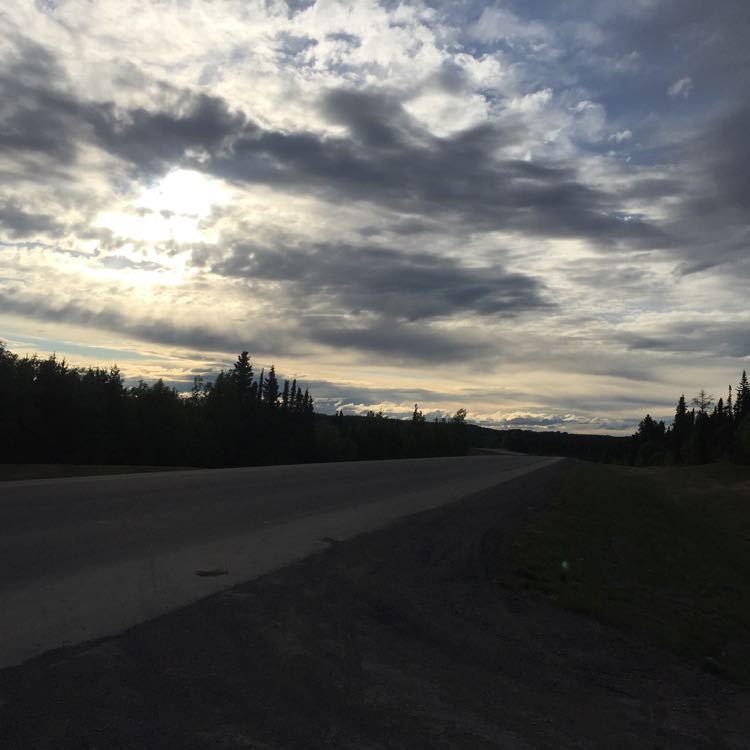 Of course, 10 minutes later, the rain dumped on me for the 3rd time. I tolerated it the 50 miles to Wonowon (the name a corruption of the highway mile marker “one-oh-one”) for gas, and I was soaked and chilled to the bone. I warmed up inside the convenience store for 15 minutes, which turned out to be long enough for the rain to finally taper off, and the sun even came out! Blue skies and a clear road for the last 40 miles to Pink Mountain, but I was chilled and soaked and waterlogged to the point that I scrapped my plan to camp, instead getting a room at the Buffalo Inn; Pink Mountain is basically a campground, a gas station, and this camp motel. 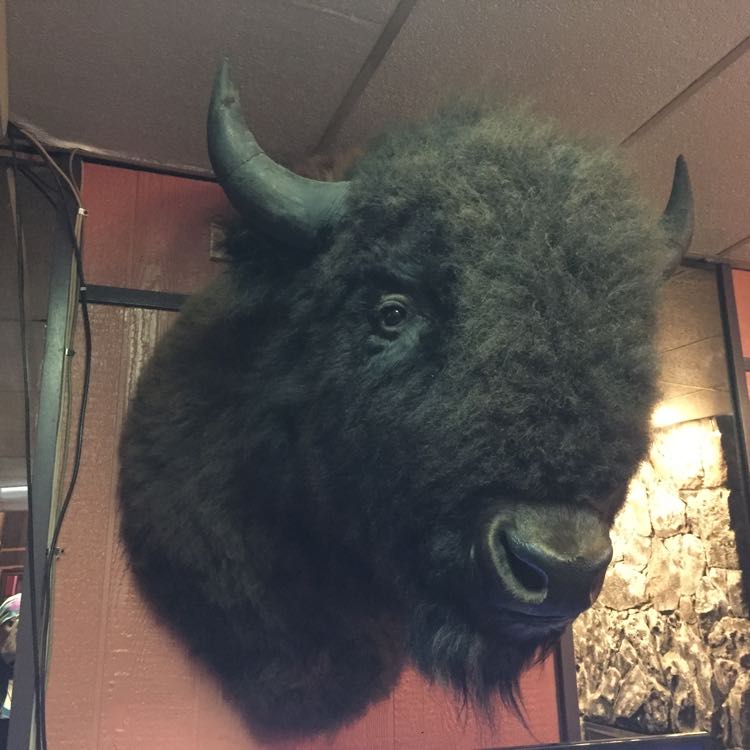 After the woman at the front desk finish apologizing for charging me a shockingly small amount for a warm, clean bed with a giant shower, I had a hearty meal at the similarly under-priced all-you-can eat buffet, chatting with the 2 guys working the kitchen.

Tomorrow I’m off to Fort Nelson and Liard Hot Springs, where I plan to soak in the geothermal waters and sleep deeply. 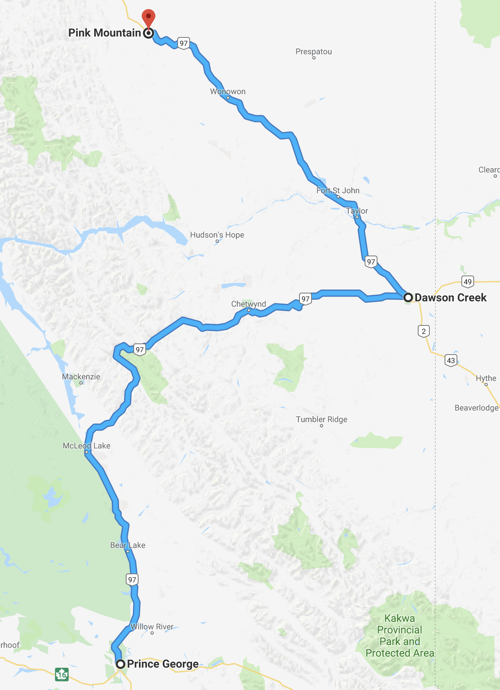