I’ve gotten exceptionally fast at packing, which is good because every night all my belongings explode across the room, prompting me to yet again wonder at the “bigger on the inside” nature of my Mosko Moto bag. A ceiling of solid grey mist hung a few hundred feet about the ocean, which I watched from the comfort of the front windows at The Good Harvest Cafe; I’ve given up this being super careful with my diet, but a 2 eggs, a slice of rye toast, and a homemade sausage patty the size of a burger isn’t the worst choice in the world. 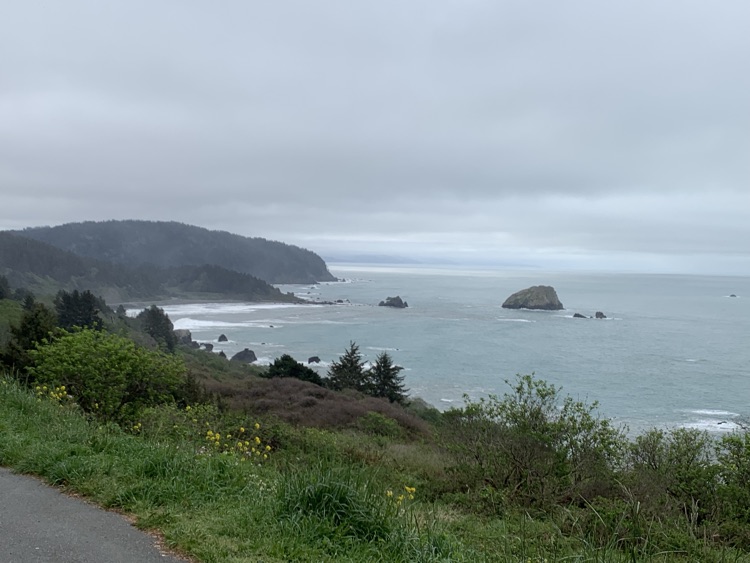 A good morning to ride

Fortified by an additional 2 cups of coffee, I ventured out, US-101 immediately climbing a headland into the fog, dancing over ravines and moss-covered hillocks through redwood forests, flirting with the clouds. Taking every scenic alternate route as I made my way south through the Redwoods National Forest, which contains a scarce 40% of the remaining sea-spray moistened giants, I can’t claim to have made good time, but I certainly enjoyed the day. 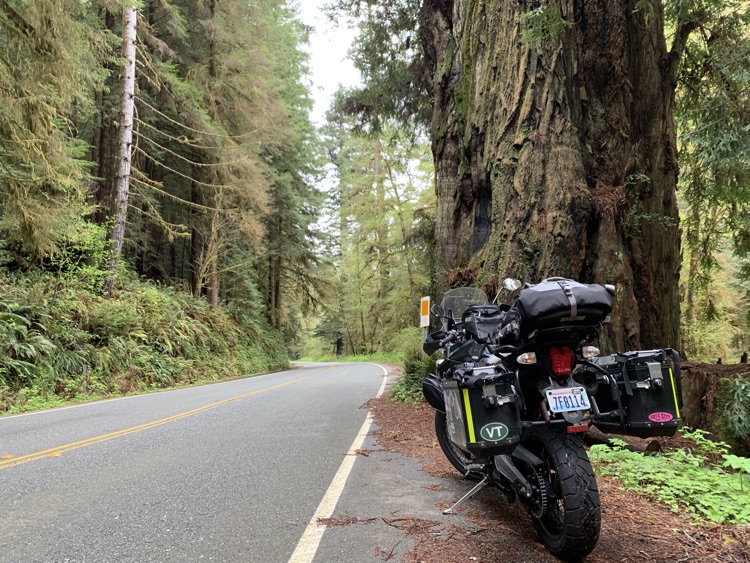 Along the Newton B Drury Scenic Parkway.

I stopped at one of the visitors centers for my passport stamp, even though I’ve completed the official Iron Butt challenge (might as well keep it going) and spotted a herd of elk as I left! 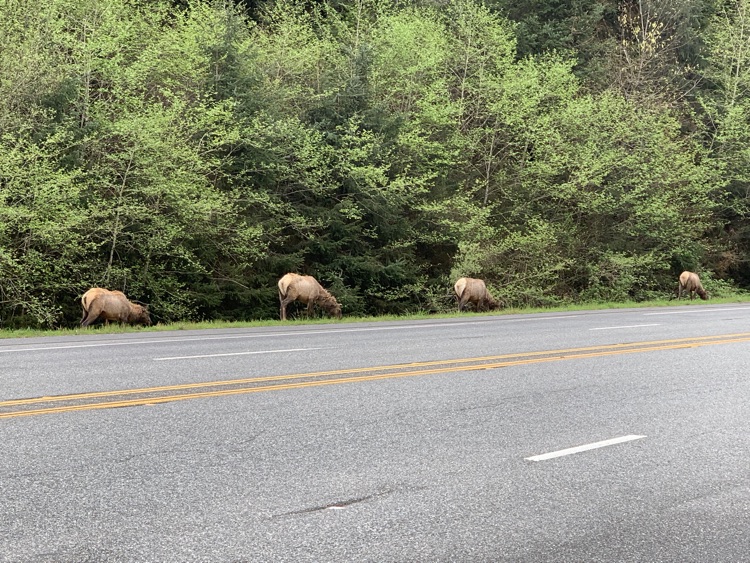 I detoured into Arcata to maybe get coffee at a cafe on the square that I remembered, but the local farmers market was in full swing and a bit of a zoo, so I pushed on to its sister city 5 miles south, Eureka, which has the Walmart and a Target. I dropped into one of the 4 motorsports shops, picking the one that had more dirt bikes out front, and had a coffee in the service center while discussing the merits of Triumph versus BMW for ADV bikes with a Harley guy who couldn’t stop mentioning Ewan McGregor and Charley Boorman. Oh, the irony.

Chain wax acquired, I continued south and took the famed Avenue of the Giants from end to end. There are 3 or 4 small villages nestled in the midst of the redwoods along the winding road, and I stopped at the last one to gas up and eat a lunch snack, chatting with a guy from Portland who had ridden down on a Triumph Street Scrambler, on a “vision quest” to figure out where he wanted to live. Good luck, Drew! 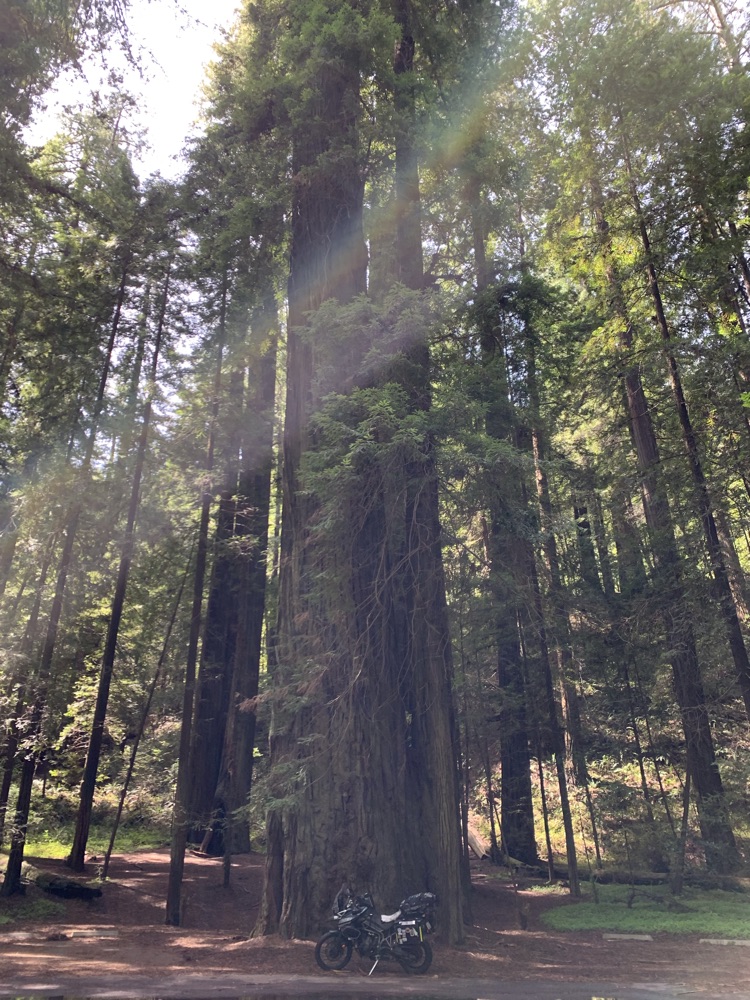 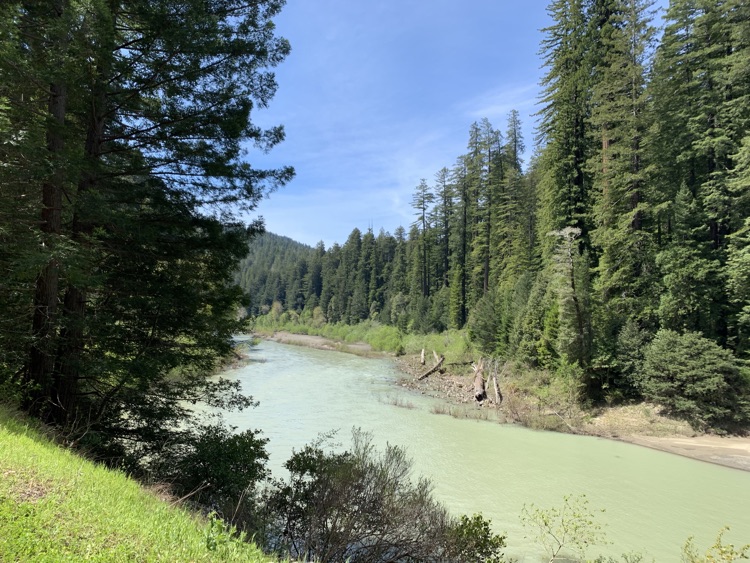 South Fork of the Eel River

Eventually the redwoods thin to occasional groves, deciduous trees crowding in with their new foliage, small sheep and goat farms giving way to cattle and hay fields, vineyards beginning to appear the further south we wind. This is empty, wild California, but fertile and hospitable. I stopped mid-afternoon in Ukiah for a coffee and some wifi at a local coffee roaster, Black Oak Coffee Roasters, and flagged it as a good stop for future travels on this road. I was ready to get to the city, and traffic began to pick up outside Santa Rosa.

It was the stop in Petaluma for a final tank of gas before getting into the city that really set my teeth on edge. Bad traffic, bad gas station manners, and a retired gentleman who walked up to ask me about the bike and then mansplained at me for 10 minutes about how I should stay in Petaluma for the night instead of going into the city, or EVER going into San Francisco, talking over me and ignoring every word I said. I had to stand there listening because I was in the middle of repacking one of the panniers so I just gave up and ignored him, and he just. Kept. Going. Amazing! Finally his wife came out of the bathroom and he abruptly stopped mid-sentence and walked off. So glad I could be your audience for a few minutes while your poor wife escaped your attentions, dude. 😡

I don’t usually mind when people strike up conversations, in fact I invite it, so I generally take it in stride when people offer up dumb opinions about where I’m going or how I’m getting there, but something about this particular interaction just infuriated me!

Traffic suddenly got rude, busy, and in a hurry, and by the time I got to the Golden Gate Bridge, the wind had also picked up. The sky had long since opened up into a beautiful blue dome, so I pulled off to the Marin Headland to get an icon photo of the city and the bridge, but apparently everyone else had the same bright idea; it took my nearly 45 minutes to get out of the traffic jam and back onto US-101 and the bridge, which surprisingly wasn’t as windy as I had feared. Siri guided me through The Presidio and Golden Gate Park to the top of Twin Peaks, where Michelle, my riding companion for this week, lives. I babbled through my riding adrenaline for half an hour, then we went out for Korean with her friend (and now my friend!) Irene and her dad, where bibimbap and a large quantity of peach soju was consumed, and I drunkenly fell asleep at the old-lady hour of 10pm. 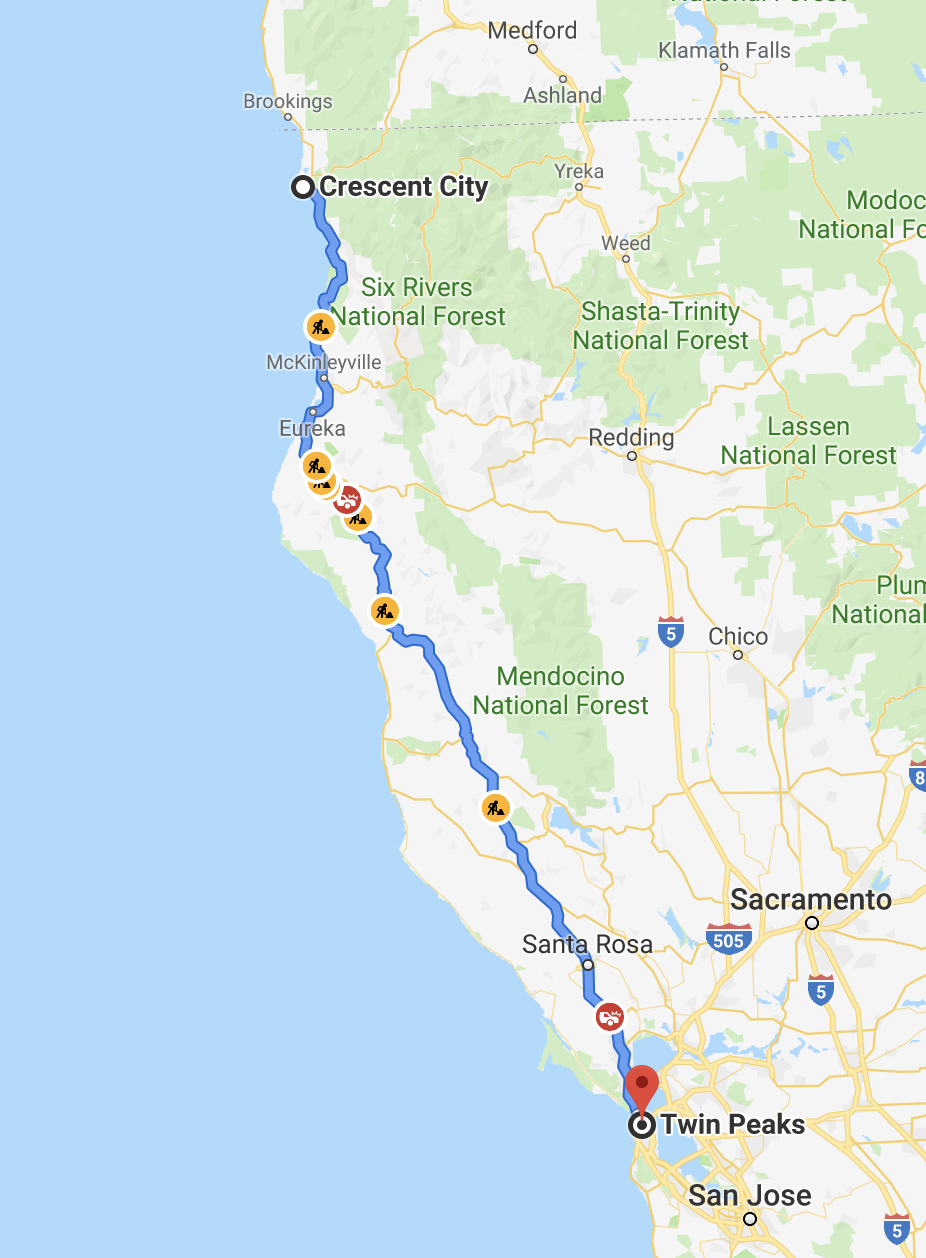