Having packed the night before, I’d fallen asleep sometime around 9:30pm, exhausted after 3.5 day of conferencing, and my body decided that waking at 3 am was clearly the correct thing to do. I groan and tried to roll over and fall back asleep, but the problem with structuring your life around the simple principle of “Listen to your body… go to sleep when it’s tired, and wake up when it’s not” is that sometimes you end up awake at seemingly odd hours. I would’ve liked another hour or two, but no matter. I know that no matter if I dwaddle or if I hurry, it’ll take me an hour to get packed, awake, dressed, and loaded, and that’s exactly what.happened.

I fetched The Morrigan from the sketchy parking garage, the only damage being someone nicked the nearly empty air horn I had zipped tied to her frame in Canada, strategically placed for ready access in case of encountering bears on narrow roads, and someone unbuckled (but didn’t steal) a few of the cargo straps on her panniers. I’d checked on her every day, and in the future I will surely grill my AirBnB host when they claim “secured parking” because yes, things worked out, but I had this low-grade anxiety about the entire parking situation for the entire time I was in Los Angeles.

I started off right, getting on 101 South at 4:45am, which is perfect since I really wanted to go north! Siri immediately began to gently urge me off the next exit, setting me right; I’d lost the little ball compass I had mounted on the windscreen back in Kansas, which wouldn’t have helped, but became sort of a hand rail of sorts, a quick double-check that I was still at least moving in the vague direction I intended, a backstop as well in case the mapping application on my phone decides to silently crash, which happens rarely, but enough that I don’t trust that it is still tracking me after an hour or more of silence.

Still, a wrong turn is easy to correct, not something to sweat, and I was soon merged into the 5am traffic of downtown, surprisingly heavy this morning. I yawned and wished for breakfast, getting stuck in a construction zone mergefest where we go from 4 lanes to 1 lane, with 2 fast moving exit lanes on the right being used by dozens of people to cheat the blockage. I dared not lane split here, with people jockeying and jostling for advantage in the pre-dawn hours, but it did lose me half an hour. I didn’t really mind, as the weather was perfect, 60F and clear, and the traffic at least respected me and the motorcycle. We broke free at last, and crested the minor pass of the San Gabriel Mountains, dropping down into Santa Clarita, and the temperature dropped to 53F. I made a planned stop at a Starbucks a little before 6am, for coffee and a bit of bike maintenance; I lubed the chain in the empty parking lot, sitting on a detached pannier, headlamp illuminating the grunge accumulating on the final drive system while spraying all sorts of solvents and chemicals into the clean Southern Californian air. I felt much less shame about any environmental impact when I went to leave 30 minutes later, having had coffee and a breakfast sandwich, to find a car that had briefly parked next to The Morrigan had dumped a pint of neon green antifreeze on the ground; a bit of WD40 and chain wax is surely a misdemeanor by comparison.

After gassing up, we climb quickly as I-5 begins to snake up over the Transverse Ranges, the sun warming the golden hills. I stopped in Gorman, CA for a short break to adjust some gear, perched on a high plateau formed by the fault lines inexorably ripping apart the state, which doesn’t seem to concern the cattle on the fancy ranches on either side of the highway. A brief stop, then back up over the next range before dropping down into the Central Valley, and 400 miles of flat, straight road. Endless rows of citrus - lemons, oranges, mandarins, punctuated by occasional wells for water or oil, extending off as far as the eye could grasp.. which wasn’t actually that far, as the entire valley was filled with dense, hazy smoke, reducing visibility to a mile. I tucked my buff up over my face in a vain attempt to filter the worst of it out, but a low-grade cough is likely going to chase me for a few days. 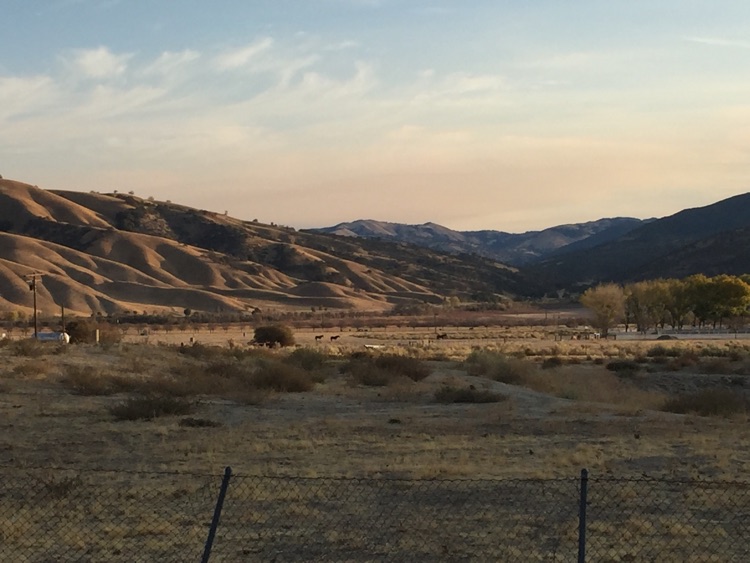 Gorman, CA, with just a hint of the smoke to come

The smoke would be an oppressive yellow-gray blanket over me for most of the day. I followed I-5 steadily north at a brisk 85, traffic fairly calm and respectful. I detoured into Stockton on CA-99, Siri sending me on a bit of a side-step to get to a Mexican party supply store on the south end of Sacramento, on a search for jamoncillo for a friend. I ended up at a giant warehouse of piñatas and decorative skulls, snacks and candy from our neighbor to the south, I spent half an hour digging around the pallet rack shelves until I found dulce de leche in bulk, along with a few other treats, then back on to CA-99 to get back onto I-5, cutting through downtown Sacramento mid-afternoon on a Friday..

Outside Sacramento, I-5 and the land on either side of it dwindles in scale, until the fields and frontage roads crowd the ribbon of asphalt, making it feel less like a fast, brash high-speed roadway and more like a particularly well-built county road. Small towns flash past, the road impossibly straight and unending, the smoke a thick haze.

Finally getting in to Redding, at the north end of the valley, the road immediately begins to twist and climb, and trees! My god, trees! REAL TREES! Big, tall, chubby trees, and a proper mountainous highway with dramatic peaks and hills and lakes… The smoke drops away, and the air is impossibly clear and clean, and it is only then that I realize what a toxic soup I’ve been inhaling all day. I’m in the Shasta National Forest now, the sun starting to set. The last 45 minutes are in the dark; I’ve been on this section of I-5 five separate times now, and still have yet to see Mount Shasta, as I always pass by at night.

Tonight I’m staying in Weed, CA, a town that embraces its name with plenty of puns and novelty tchotchkes for sale at every business. Dinner at the Hi-Lo Cafe, and then off to bed. Today was a long, boring day, but tomorrow I should be able to make Seattle before dark. 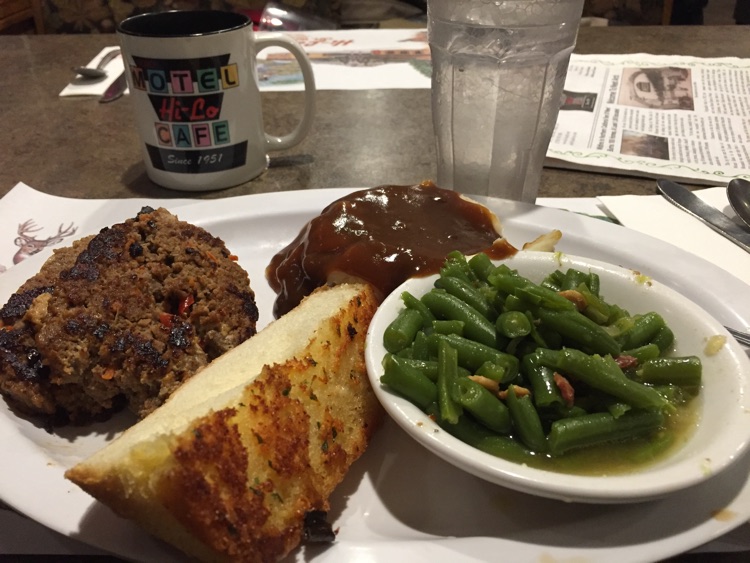 Honestly some of the best diner meatloaf I've ever had!