I timed leaving [cheap generic motel] perfectly, rolling up and out of Las Cruces as the sun began to shove its way over the Organ Mountains that bunch up on the eastern edge of the city. Skipping over dodgy pavement on I-10, I pulled off 30 miles later for a photo op at Akela, NM, at a tourist trap/gas station that has an entire city block of fake store fronts, all with painfully “clever” pun names. I’d spotted it on the way east, but missed the exit.. no such problems today! 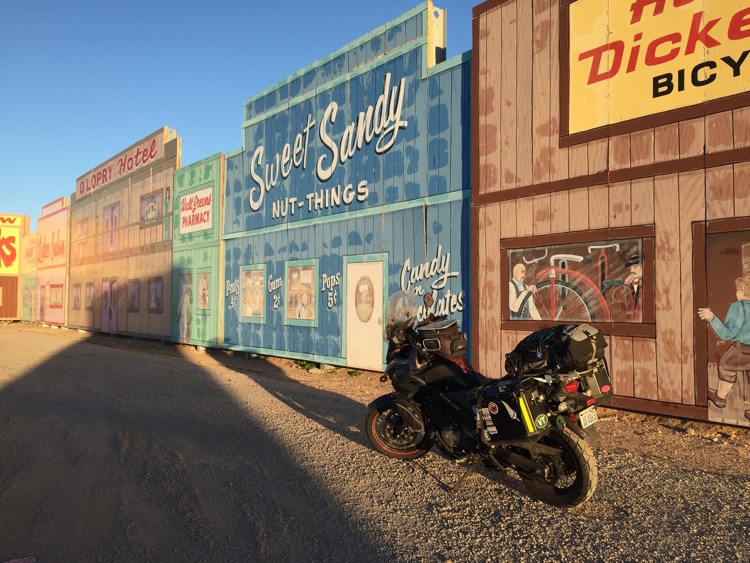 From there I headed towards Deming along NM-549, which parallels I-10. It was a great choice, rolling cast pecan and pistachio orchards and a large holstein operation, hawks and falcons perched on every 4th power pole, scouting for breakfast. I’d stayed in Deming on the way out, and I knew there would be plenty of breakfast choices for myself, but on a Sunday morning my only option was Denny’s, solid as ever. Mercedes, the young trainee, shyly helped get my coffee and breakfast order sorted, and nervously checked on me a half-dozen times. I wanted to talk to her about being 22 in a town like this, but I know exactly what it is like to be 22 in a small town. 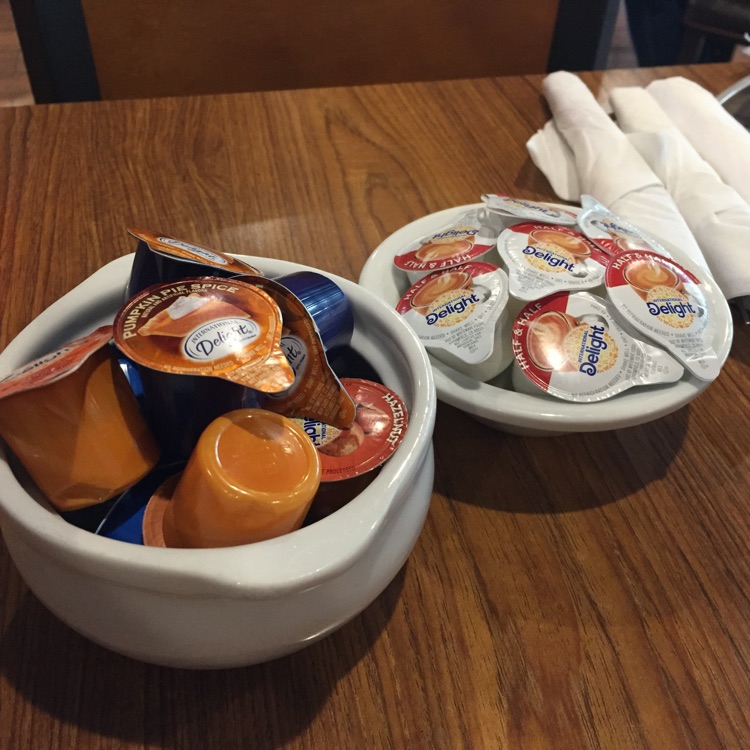 It was 35F when I pulled in to the Denny’s parking lot, but an hour of sunshine later, the thin desert air had warmed to 57F. Giant tumbleweeds gathered in the parking lot, blown by a playful zephyr, and a stray dog came up to inspect me and The Morrigan at the gas station.. just a quiet morning. Now begins the long, straight run across New Mexico, scenic and beautiful as it was on the way east 2 weeks ago. Burning fuel to keep up with traffic, yucca, prickly pear, and creosote crowd the dry washes and flat plains, the road chasing the railroad across the desert. Long trains of cargo and grain moving efficiently between oases. Even when the highway and rails diverge, you can still see way across the desert a train in the distance, its cars a multicolored checkerboard of material goods stretched across the horizon like some streamer of civilization, a colorful, rusting streak across the browns and greens of the shy desert.

I decided to be a sucker for tourist traps today, so I stopped at “The Thing?” — a gas station, Dairy Queen, convenience store, trinket shop, and elaborate conspiracy theory annex. I wandered through the junk and toys, paid my $5, and wandered the modern and well-produced halls of the “museum” that lays out the colorful conspiracy theory that millions of years ago an alien race of Grays used mind-control tech on dinosaurs, who eventually became sentient and rose up to overthrow their extra-terrestrial masters, nearly destroying the planet in the process. Since that time, the aliens split into 2 factions and have been pulling the strings of humanity in order to advance our industry to the point we can build the aliens a spaceship to get back home… or something like that. There were also a ton of old farm equipment mixed in there, with little information on what purpose it served for the aliens to help us invent the tractor, and of course the obligatory “mummy” at the end, which is the titular “Thing”.. and you’re left feeling entertained by the level of commitment and investment in signage and props and life-sized dinosaur and alien models, but also saddened by the possible exploitation of an actual human and their remains. 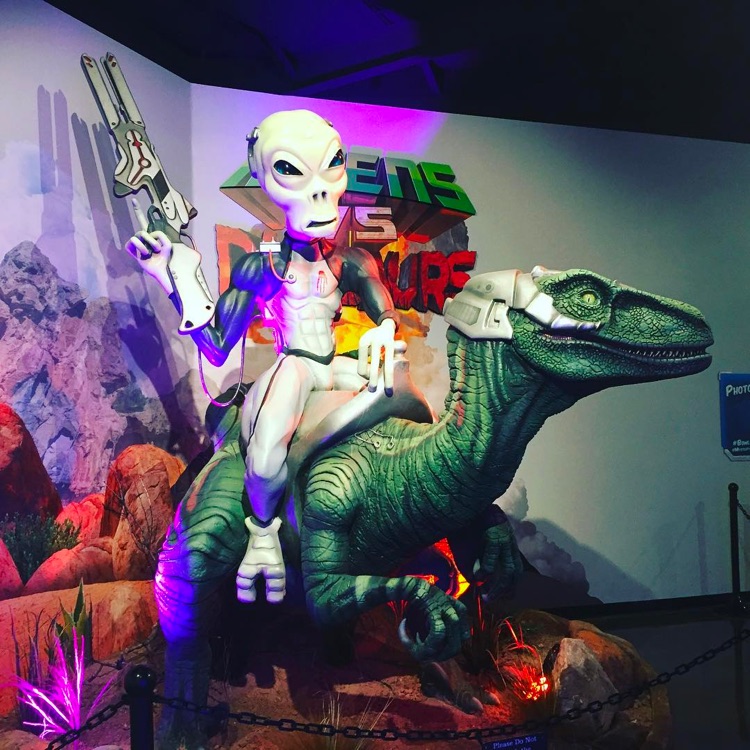 Honestly, it makes as much sense as some dude sitting on a cloud slapping humans together out of mud..

Of course, its not *really* a mummified human, but a prop made by an infamous roadside attraction prop maker in the 1930s.

Back on the road, sliding down into the valley that holds Tucson and Phoenix, the temperature rising to the mid 70s as the “dumb” traffic increased. More people in the cities means more traffic, and higher odds of people who are dumb assholes behind the wheel. I spent a stressful hour dodging through Phoenix traffic, until I-10 bends west and the traffic falls away to almost no one but trucks and professional travelers again. Of course, this welcome respite from idiocy was replaced by a powerful 25-30mph wind, and the last 150 miles of my day would be spent leaning over dramatically into the northerly wind, breathing through a handkerchief to avoid the minor dust storms kicked up by it. I stopped at every rest area to relax and take a clear breath, rehydrate, and dive back into the rushing wind once more. 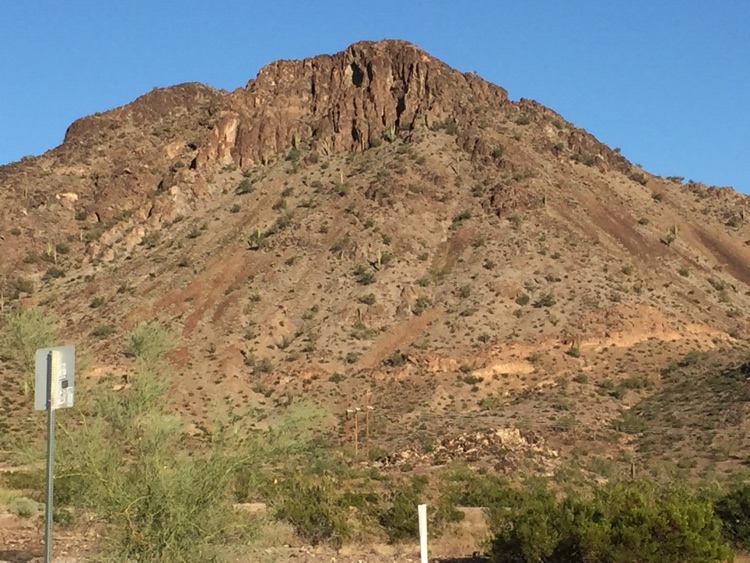 Smack dab in the middle of the Sonoran Desert.. can you see the saguaro? What you can't see is the wind trying to shove me into the next lane of traffic..

Staying tonight in Blythe, CA, finally back in my home time zone. I found a ridiculously cheap motel on the edge of town, recently renovated, clean, and perfectly wonderful. The town itself has a wide, flat downtown of small businesses and national chains cheek-to-jowl with the highway exits, but it’ll be another early night for me. I’ve got about 200 miles/3.5 hours of riding to get to my AirBnB in downtown LA tomorrow, but can’t check in until 3pm, so will be working and doing open source work from a series of cafes and diners along the way. I’m hoping to get closer in to the LA metro area before the winds kick up again.