Babes Ride Out 6 was a fabulous event, but it was time to say goodbye to friends old and new, and get back on the road. Farewells and Facebook/Instagram/Twitter links exchanged, I let RoKo talk me into riding the loop through Joshua Tree Nat’l Park proper (and by “talk me into” she said “Hey you wanna go?” and I said “Yeah sure!”) We braapped over to the eastern entrance, and I had a slight hope that the road spur south through the park to I-10 would be open, but the recent storms had done more damage than a bit of sand on the road, but no matter, its a great day, I’ve got plenty of time, and the park was gorgeous. I thought of stopping a number of times to take photos, but was really more lost in thought about the last time I was here, almost exactly 3 years ago, when I was in San Diego for a medical consult and had bopped up to Los Angeles to play poker at the Bike, and how I treated myself on my birthday to a picnic on top of a pile of rocks in the desert. Its a sad memory, as I worried at the time that I was about to embark on a lonely journey, and a year later I found out those fears would prove to be true… and false, at the same time. Life is funny that way. 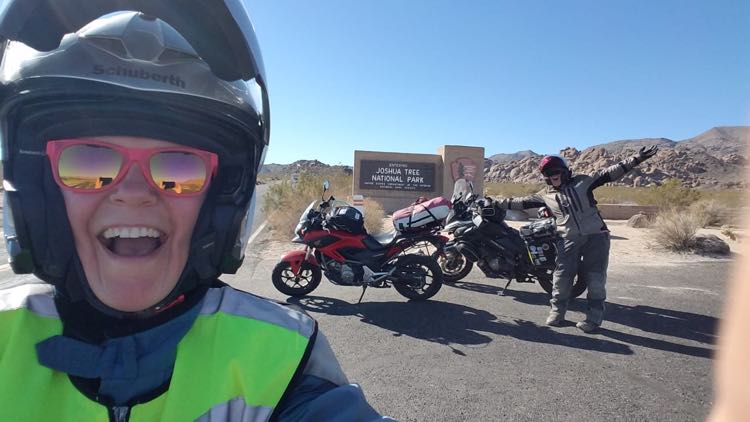 Sadness aside, the park was lovely and the company stellar. Back in Joshua Tree, we said our goodbyes, as RoKo is off for Mexico (that’ll each me to travel without my passport…) and I’m bound for Phoenix, AZ. I had to backtrack a bit through Twentynine Palms, CA, but soon enough all the standard gas stations and fast food joints fell away,,, held back by a “No Services 100 Miles” sign as I plunged into the Sheephole Valley Wilderness, a gorgeous and desolate ribbon of highway, sandy soil secured by occasional yucca, mesquite, and joshua trees, which dwindled to scraggly creosote bushes and sage as the temperature climbed and the tarmac unfurled across the flats. 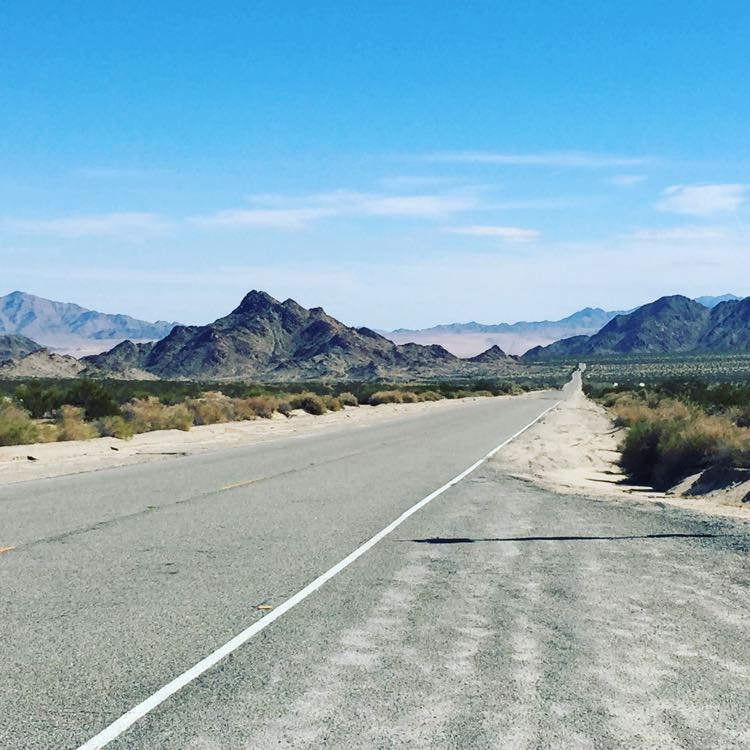 Spotted my first saguaro cactus, the stereotypical looking desert plant (🌵) just outside Vidal Junction, CA, where I stopped to get a drink at the lonely gas station at the crossroads. I knew I was back in the southwest after seeing that gorgeous, iconic species, but also spotting pedialyte in the cooler next to the beer, soda, and energy drinks. I guzzled half a bottle and skipped the crowded gas pumps, opting to stop instead in Parker, AZ, just across the Colorado River from California. I thought about taking a detour up to Lake Havasu and Kingman, but the pull of a motel reservation, cheap as it was, was enough to motivate me to stick to the plan. After several days of camping in the desert, the idea of a hot shower and washing my hair was too attractive to pass up!

I cut southwest across increasingly healthy looking farmland, past some truly massive dairy operations; endless silage bunkers, thousands of Holsteins, massive feeding troughs and corrals.. the wind picked up as a I got near I-10, and after a week of lonely roads and calm air, I steeled myself for the traffic and wind of the interstate. Speed limit fluctuated between 70 and 80, but 90 seemed the minimum speed of most drivers, and The Morrigan strained to keep up and stay strong. I stopped a number of times to breath and relax, and finally managed to get to Phoenix with a minimum of traffic drama.

I’m holed up in Phoenix until at least Tuesday, when the local Suzuki shop is scheduled to replace the worn and leaking front fork seals; the leak I fixed in Whitehorse earlier in the summer reappeared in western Kansas last month, and it hasn’t been one I’ve been able to clear; my attempts at reseating the seal have had limited, temporary success so far, and at 33,500 miles, its time to replace. I sometimes get annoyed that things are wearing out on The Morrigan, but when I think about it as a function not of time but of mileage, it makes much more sense; I’ve ridden10 times as many miles as the average motorcycle in the United States, it stands to reason the machine will exhibit more wear and tear than you might expect for a machine that is still less than 2 years old..