Worked 6am to 1pm, which actually was good because a storm front rolled through central Michigan in the late morning, and I spent the first half hour seemingly on the verge of catching up with the rain, but it soon cleared as the sun began to boil. Hot, humid, blinding sun, and windy; third day of continual strong winds out of the south-southwest. Crossing central Michigan, I swung south just short of Detroit, stopping at the River Raisin National Battlefield, the site of a battle of during the War of 1812. I got my stamp, chatted with the 2 park rangers about the impending expansion; they apparently are doubling the size of the park, having bought a number of derelict houses around the edges of the park, and will be razing them and replacing them with a historical reproduction of the town that existed on the site circa 1812.

I plugged in my next destination - Pres. James Garfield’s home and Presidential Library, in Mentor, OH, just east of Cleveland, and the Giggle Lady warned me that I’d arrive after closing - DOH! I worked too long this morning! I found an alternative, Fallen Timbers NHS, found that the stamp is held not at the site itself but at the public library in the town of Maumee, OH, a suburb of Toledo, and rerouted - only an hour out of my way, roundtrip.

Illinois, Indiana, and Michigan all have one thing in common - bad roads. Ohio is no slouch in this department, either. Toledo and its suburbs are lovely, orderly little towns, and the library reminded me of the one in my own hometown, right down to the smell. The circulation desk librarian found the stamp in a small Tupperware behind the desk, and inside were 2 other stamps as well - Fallen Timbers Monument NHS, and Fort Miamis NHS - triple score! There were also business cards for the president of the local historical society, and the librarian said I could call him if I had time, he’d give me a tour of the fort and the Fallen Timbers site! I wish I could’ve, but wanted to grind some miles out. 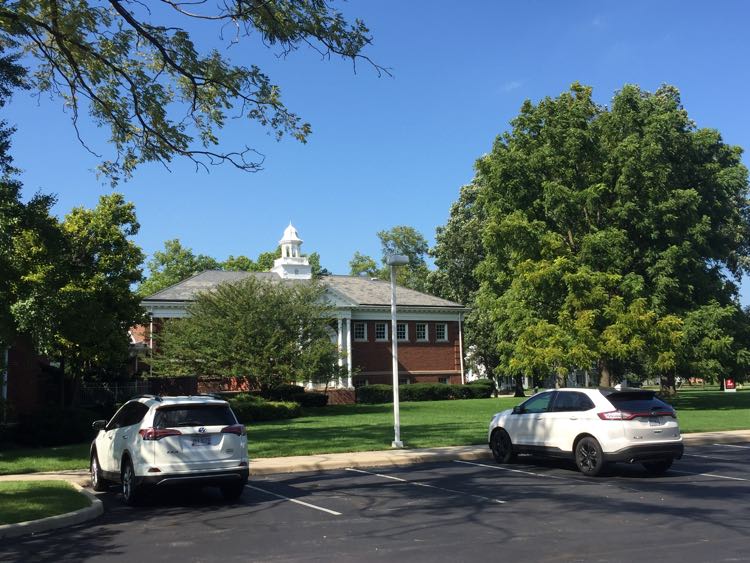 Wind, heat, and humidity continued onto the Ohio Turnpike. Temps hit 95F and I noped right out, stopping at a service plaza for an ice coffee and air conditioning. I sat in the food court for nearly an hour before feeling ready to brave the hellscape outside again. I used the time to find a cheap motel in.. Mentor, OH, my original destination! I’ll be able to get the stamp in the morning, since I’m here.

Cleveland was quiet at 7pm when I rolled through, having missed whatever rush hour is like here. I didn’t make good time today, given the detours for stamps, having to stop frequently to cool down or to rehydrate. Tomorrow the plan is to get to central New York, somewhere around Seneca Falls, NY. The weather is supposed to be marginally cooler, so I might be able to have a bit more endurance for the road.