It wasn’t supposed to be the kind of day it ended up being. As per usual, on the motorcycle, that’s completely ok.

Started with the usual routine - up at online by 6am, worked a few hours until the motel kicked me out, went to find better wifi and better coffee, then hit the road after 6 hours or so of work. I broke it up with a stop at an autoparts store to get oil and an oil filter, since The Morrigan is overdue for it, and since my laptop keyboard is intolerably broken at the moment (it inserts random extra spaces as I type..) I also picked up a $20 compact wireless keyboard, then sat in a Starbucks debugging regular expressions until nearly 1pm, then headed out.

Weather was beautiful today, if a bit on the warm side. I’ve come far enough east to get mostly clear of the wildfire smoke, so the sun felt a bit stronger than it has until now. I somehow also traded yesterday’s helpful tailwind for a slight headwind, which contributed to some of the worst mileage I’ve ever gotten out of this motorcycle (well, the wind and the fact that I was going 85-90 almost all afternoon!) Because of the reduced mileage, I ended up doing more gas stops than I usually do, but I went further, faster.. supposedly its less-fast overall if you push the speed up, but it felt great to chew prairie miles.

Wyoming didn’t fail me as the day went on, the range land and pastures fading into dry scrub and oil and gas fields. I got off I-90 in Moorcroft and cut north to Devils Tower, which was a lovely ride, twisting through ponderosa pines along the Belle Fourche River. I had picked up an Interagency Pass at Little Bighorn - $80 for year, but it gets me in free to any National Park, Monument, Museum, etc.. pretty sweet deal, considering how many I’ll be hitting.

The visitors center was the usual mess of tourists and RVs packed into a tiny little space, so I quickly got my stamp and retreated back down to the Devils Tower Trading Post, a gift shop and cafe 10 feet outside the park entrance. I got an ice cream cone and hung out on the wrap around porch, where I met Kayla, a young woman from Salt Lake City who was ridiculously gorgeous, riding an older, smaller Harley that I couldn’t place, with amazing tattoos. We talked about her tattoos, her custom painted helmet, and the ride she’s doing – some kind of Harley commemorative ride, she’s on the road with a crew of other Harley riders, heading to Milwaukee. She invited me to a BBQ at the Harley dealer in Rapid City, but I declined, citing my desire for an early night.

Riding back out of the park to Sundance, WY, I picked up I-90 and merged right into the middle of a pack of Honda Gold Wings and Harley yachts. I spun up to 94, 95 mpg and pulled away from them. At some point I crossed into South Dakota, but there was no big sign announcing the border, the only indication was that the numbering on the highway exits reset to 1. I stopped in Spearfish, SD to refuel, maybe 20 miles from Sturgis, where I’d planned to camp. The steady stream of mean-mugging Harley riders, the proliferation of multi-story crucifixes, and the general “we’re here to drink and break shit” I got from the advertising made me rethink the plan.

“Hey, self, you know that Rapid City is only another 40 miles down the road, and its only 4:45pm.. The sun sets around 8pm, heck, you could probably make it to the Badlands visitors center that closes at 7pm, its only 2 hours, I bet you could make it!”

…an so I did! I skipped Sturgis, Rapid City, and only stopped at Wall Drug long enough to get gas and gulp down some water, but I made it to the Badlands with 20 minutes to spare. I got my stamp and sat outside watching the sun go down, sipping on a LaCroix, when a guy on a KTM 990 with Virginia plates pulled in. I watched from my bench as he checked out my bike, quietly proud of all the stickers I have proclaiming not my brand allegiances but my adventures and memories. He trotted over and we chatted for a good 25 minutes. Matt is from Virginia, but lives and works out west. Most recently he’s been working as a pit crew member for cars at the Bonneville Salt Flats and is on his way back to Virginia to ride the Kentucky Adventure Trail. Last summer he rode the Trans America Trail, and now I want to get a DRZ450 and ride dirt across the United States! We traded ADV Rider profile names, and parted company, he off to find a campground, me off to take some Golden Hour photos and head to Kadoka, SD, where I’m not camping, but squatting in a [cheap generic motel] again. I’m blowing out my budget with motels, but the wifi has been worth it. Maybe tomorrow I’ll camp. 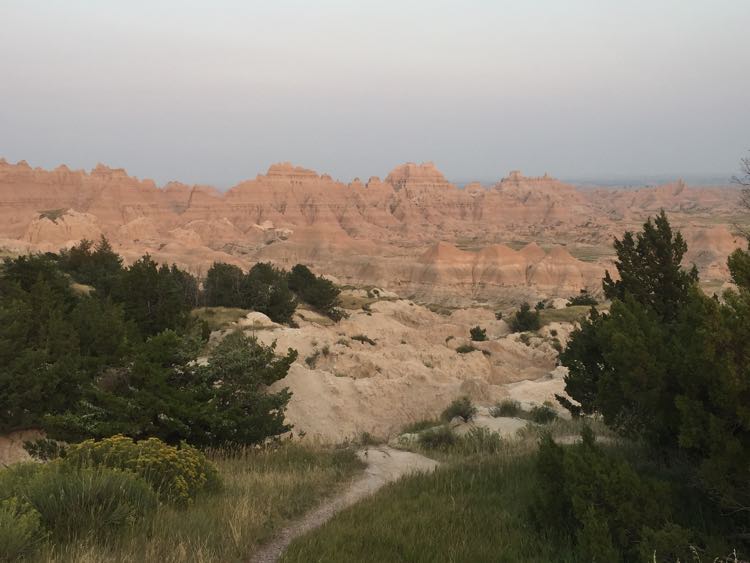 Tomorrow’s goal in Sioux Falls, hopefully to have coffee or lunch with another friend of mine, then popping north into Minnesota to Pipestone National Monument. Thanks to the extra 2 hours of riding I did today, tomorrow’s plan is only around 270 miles, but I’m going to change the oil during lunch in Sioux Falls, and after Pipestone I’ll just keep heading east until I get tired. I’m not sure if I’ll head towards St Paul for the Minnesota State Fair (butter carving!) or if I just push directly on towards Madison, WI; Chicago is looming, and I have some ideas on how to skip it, but it is going to take planning and effort. I have 3 weeks before I have to be in Buffalo, but I’d like to maximize my time in New England and get some riding (and stamps!) while I’m out there, so I can’t waste TOO much time right now. 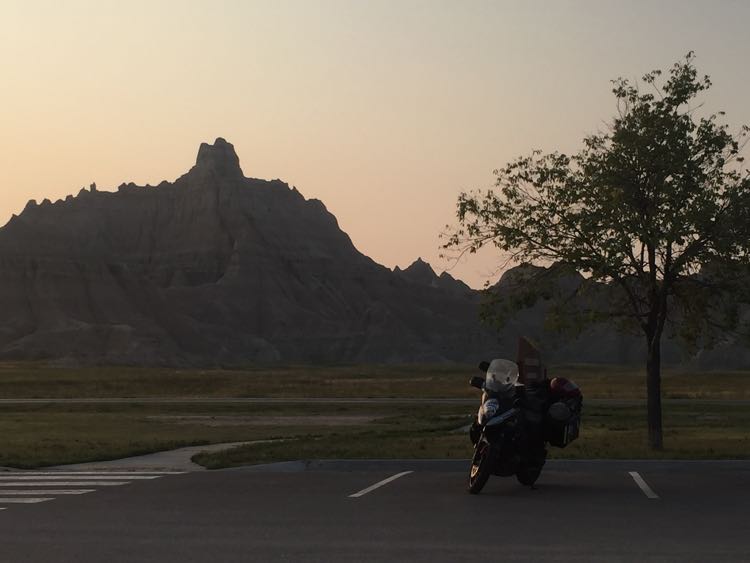