Another “online and working by 6am” kind of day, I banged out some documentation, reviewed some code, had some debugging for customers, and suddenly 5 hours had gone by! I packed up ahead of housekeeping and visited the Berkely pit, what the lady at the visitors center/gift shed cheerfully referred to as “the largest body of toxic water in the United States!” I paid my $2 and crossed through a tunnel to the viewing platform, occupied by a local tour group, so I got the whole spiel of the history, the toxicity, the way it kills thousands of birds.. an open pit mine that ran for 50 years, they stopped trying to pump water out of it and let it flood until it became a problem for the Feds. The water is as acidic as vinegar and contains all kinds of nasty heavy metals and leftover pollutants (such as the class arsenic) from the mining operation. There’s a water treatment plant that can handle up to 7 million gallons per day, but ground water seeps in at 4 millions gallons per day, so they’re not making all that much progress. Occasionally, randomly-timed blasts of an air cannon, music snippet, or weird sound effect is heard, an effort to scare birds away from landing on this toxic stew.. some years it works, some years it doesn’t..

No lifeguards on duty

Lots of slab on this trip; out of Butte you head up and over the Homestake Pass, a deceptively slow climb to over 6,000 feet. For the first time ever I saw a truck in the emergency “oh shit my brakes are gone” gravel ramp! The mountains here are weird goblinoid shapes, very reminiscent of Joshua Tree. You get an amazing view of the upcoming prairie as the road straightens, the trees disapper, and the whole world opens up.. of course, the wind also makes an appearance, bad enough that I had to get off the highway after about 15 miles to decide if I wanted to continue or not! Luckily the road climbed back over another ridge line, and the road and wind aligned in such a way to give me a rather pleasant tail wind for the rest of the day, giving me quite a decent boost in miles per gallon in the process!

Stopped in Bozeman to have lunch with a friend, and I really wish I could’ve stayed longer! They’re super interesting, and I’d love to have chatted more.. and Bozeman is a great small city, I can see why so many people I know rave about the place.

Montana is far greener than I imagined; south-eastern Montana is range land and pastures, with the occasional hay operation. I think I spotted a few fields of rye, but I wouldn’t swear to it. Green grass and trees everywhere, with an undercoat of beige and gold grasses, dead leftovers from earlier sproutings. The road keeps rolling and rolling up and down gentle hills and valleys, with the occasional ridge line to climb. Traffic is minimal and polite, the road in great repair, and The Morrigan fulfills is chief duty, that of being a machine that turns gasoline and rubber into Zen.

One peculiar thing I’ve noticed about Montana - casinos are everywhere! Every tiny town has 3 or 4.. I gather they’re just 4 or 5 slots, a Keno board, and that’s it. A few advertise “poker” but in talking to the guy leading the pit tour, its just low-limit 5-card stud, which is a horrible game. Happy enough to skip it.

Stopped in Billings.. I think. There was no real downtown, just fuel refineries and the usual assortment of generic American fast food/box stores at each exit, so I kept moving.

I did stop at the Little Bighorn Battle National Memorial for my stamp, and ended up spending an hour going through the visitor center displays and walking the memorials around where Custer’s Last Stand took place. It was moving, seeing this rolling prairie spreading down around you like a blanket, and scattered across the land are white marble and red granite markers denoting where soldier’s bodies were found; white marble for the US soldiers, red granite for the Native Americans. I’d say more about it, but I’m still processing.. 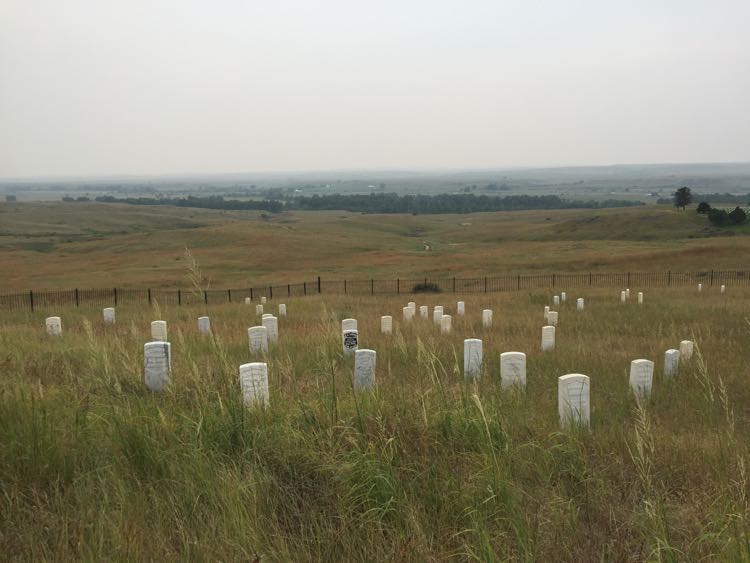 Sheridan, WY is my lodgings for the evening. Had a big pork chop at a local rib and chop chain, got gas for tomorrow, and checked in at work. My laptop’s keyboard is getting seriously flakey at this point, randomly inserting extra spaces every 3rd or 4th time I hit the spacebar.. I may need to buy a new keyboard at some point in the next few days, because the extra space also triggers autocorrect (which is usually wrong) as well as inserting a period when it thinks you’re at the end of sentences… le sigh. Stupid butterfly key switches! It inserted 11 extra spaces in this paragraph alone; I’m stopping at the next Walmart or Best Buy I see and buying the cheapest, most compact keyboard I can find, this is bananas!

I’ve got another work-work day tomorrow in the morning, then heading to Devil’s Tower for my Wyoming stamp, then on to Sturgis! The big Harley rally ended 2 weeks ago, so things should be quiet! I’m camping at one of the many motorcycle-oriented campgrounds. Can’t promise I won’t get a new tattoo while there!