Actually got a good night’s sleep!

..as long as you accept 5 hours a “night” of sleep. Luckily I do (I normally only sleep ~6 hours a night) so I woke up refreshed and ready to tackle the long, scoreless slog back up I-5.. but at least I’d be going through some of my favorite sections of it!

My first attempt at getting a receipt here was 40 seconds too early, so I had to wait and pull another one. Glad I checked! 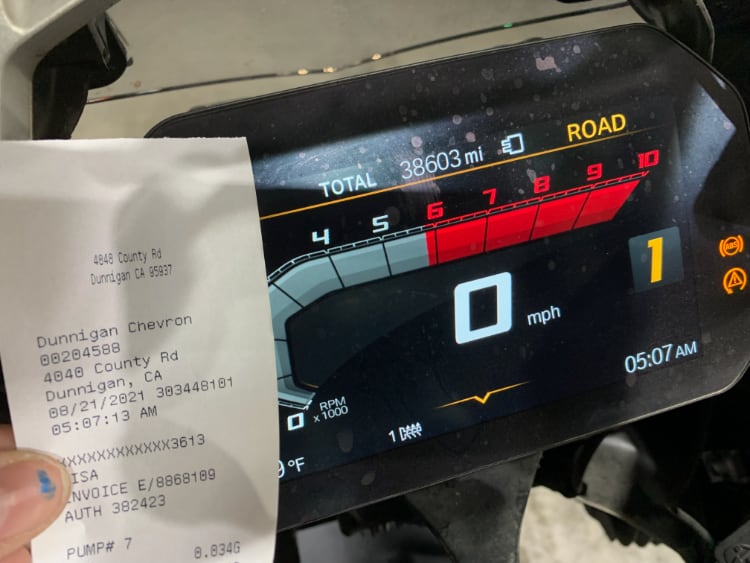 I-5 was empty and fast moving all the way in to Tacoma - great weather, pleasantly cool, no LEO, no accidents.. some congestion south of Portland, as there always is – there’s just huge sections along I-5 where there ARE no other roads besides I-5, and it’s only 2 lanes, so all the local traffic squeezes in with the regional and long-haul folks and its just a slow mess. Along the way, I made sure to snag a few DBR bonuses, the only points I could earn along this route.

Take a picture of a receipt from Oregon. Rally flag not required. 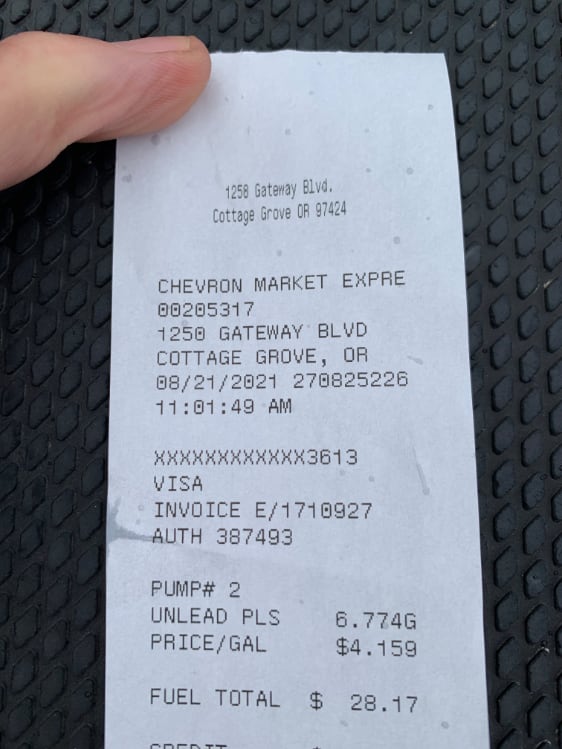 Take a picture of a receipt from Washington. Rally flag not required. 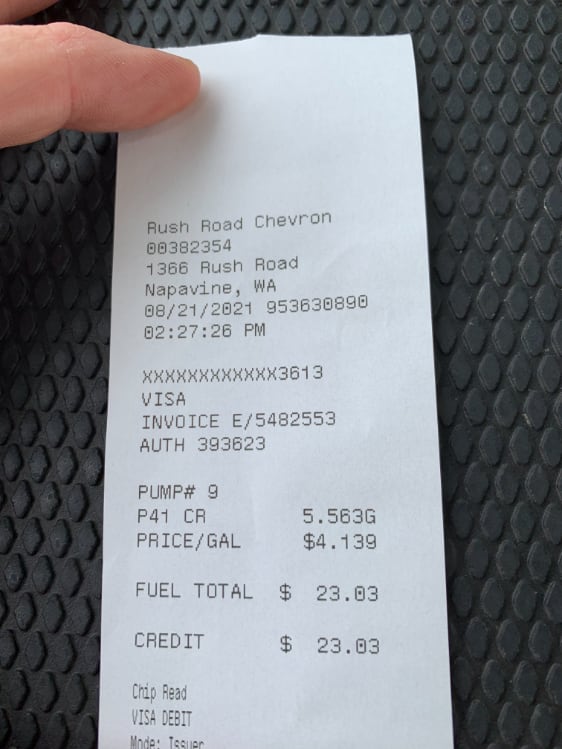 Take picture of your motorcycle after successfully claiming ST001, ST002, and ST003. 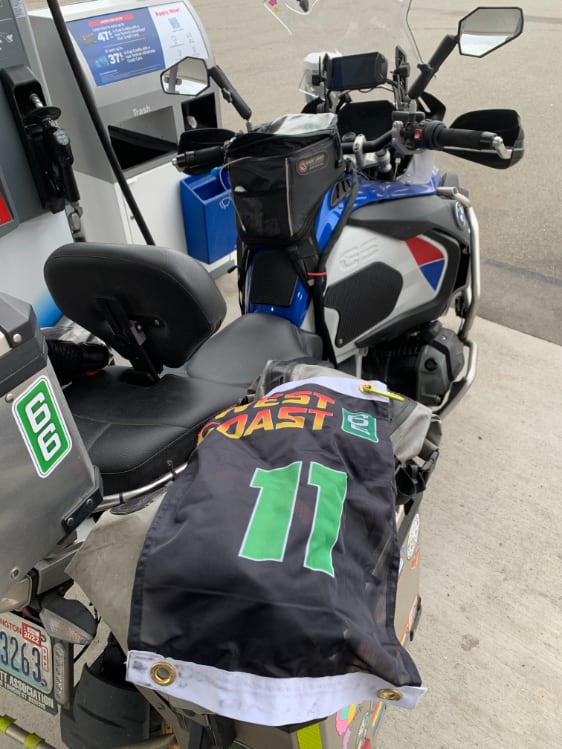 I knew that I was going to score a ton of points, but there was a scoring opportunity that I had been a little waffly on - the Tillicum Village bonus, as it required leaving the bike behind and hopping a passenger ferry out to Blake Island in the middle of Puget Sound. The 30-seat ferry was 27 minutes each way, stopping at the island only for as long as it needed to un/load passengers, so I was a little hesitant. Seeing that Robert Bowman had managed to claim it on Day 1, however, gave me some confidence, and I had at roughly 3.5 hours of cushion time, so even if I missed the return boat and had to wait an hour for the next one, I’d still be able to make it to the finish with time to spare. With that in mind, I’d gotten a ticket on the 6pm ferry.

I rolled into downtown Seattle around 4:30pm, and it was a mess, but being local, I ignored my GPS and headed straight to the dock, undeterred by the Seahawk fans swarming the waterfront ahead of a preseason game at the stadium. Of course, what I didn’t count on was that parking was going to be a nightmare, but I spotted a small garage that had only slightly exorbitant event pricing (at this point, what’s another $20?) Of course, after pulling a ticket and negotiating the HUGE speed bump in front of the entrance gate, the dang door dropped really fast, and dropped down on me, clipping my windscreen and then my helmet. I limbo’d to the side, but lugged the engine and dropped the GSA as the door dropped with a crash behind me!

A passing Seahawks fan ran over to check on me, and I admit I was laughing pretty hard at how ridiculous a drop it was, but I didn’t scare him TOO badly, but he did seem really concerned I might have a head injury. I couldn’t bring myself to worry him by explaining that whacking my head on the door might actually be GOOD for my mental health, and let him be gallant and try to lift my bike. Eventually I gave in and helped him help me, and headed over to the ferry dock. I politely got them to change my ticket from 6pm to the 5pm sailing (in 10 minutes!)

Take a picture of the mural on the side of the building. Picture must be taken from Blake Island.

Chatted with the captain about the rally, his boat, the other weirdo who’d gone over to take a photo, etc.. nice enough guy. The boat itself was having some kind of mechanical issue so the usually 27 minute route was taking 35, and his whole schedule was off because of it.. oh well, more time to nap. I caught some shut eye on the way over, got my photo, then dozed off again on the way back to shore. 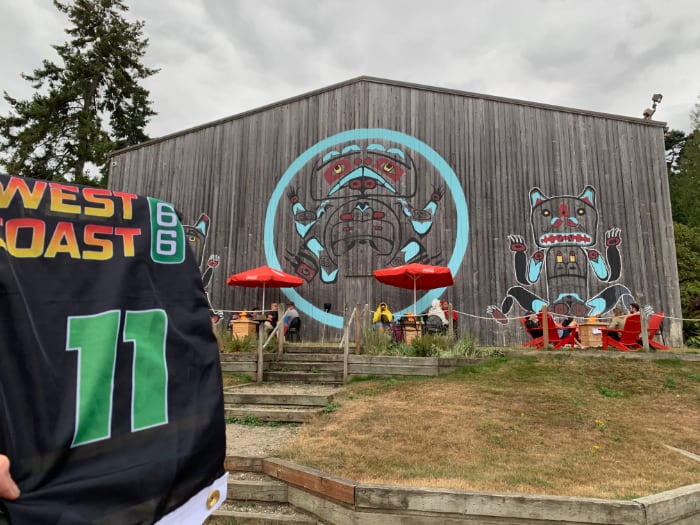 Back on shore, I stopped and visited the restroom, and then had to figure out the garage’s broken ticket kiosk. Finally got back moving after about 10 minutes, heading to South Lake Union.

Take a picture of these stairs in the courtyard.

Grabbed this for the points, but is also the last bonus I needed to score another huge combo. 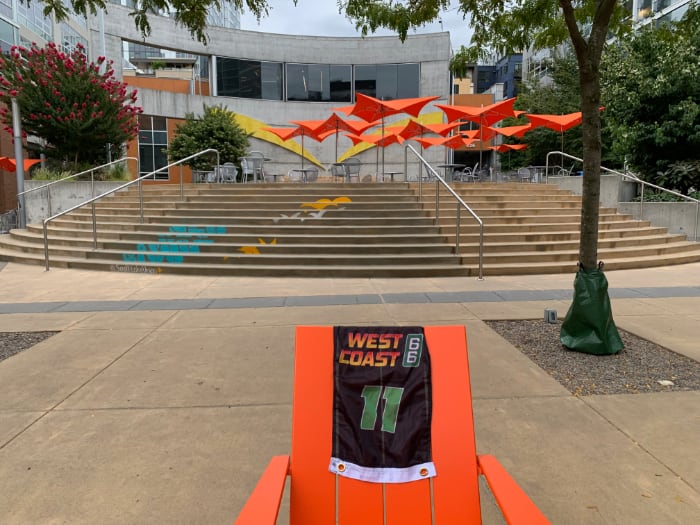 Take a picture of your motorcycle after successfully claiming TC004, TC006, and TC011. 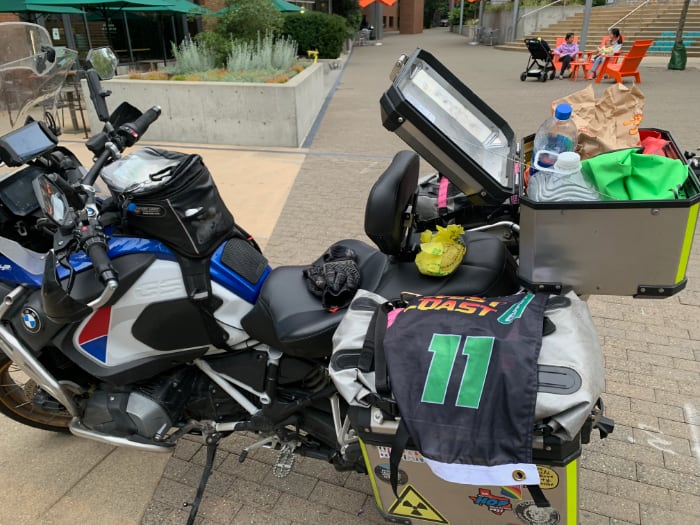 Now I turn back south towards 3 last bonuses and one large combo. I passed up running out to Redmond to snag Microsoft - 523 points. I’m still a little conflicted about this, but felt confident I wouldn’t need the points, and Bellevue was looking a little troubling trafficwise.

Take a picture of the 12 Flag on the side of the Seahawks training center. 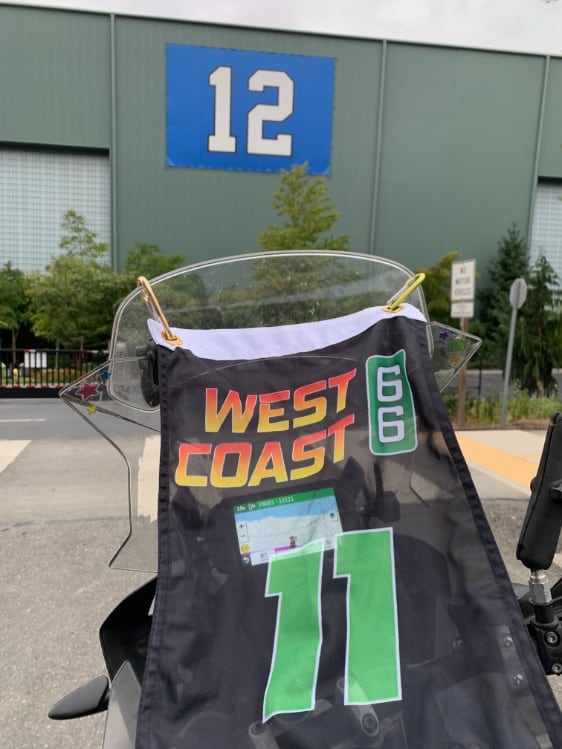 Take a picture of the Sound View Camp entrance sign.

Now a “quick” run out onto the peninsula to grab this, part of a high-value 2-bonus combo. I’ve camped out here a few times, but as the sun dropped, I started getting a bit tired. I stopped at a tiny convenience store and got one of those sugary coffee drinks, which picked me up a little bit. A guy in a jeep stopped and gave me some grief about my aux lights shining too high - the drop knocked one of them out of alignment. He got really apologetic when he realized I was a lady-person, and tried to convince me that Harleys were better than BMWs.. not really interested in that tired old argument right now. I politely extricated myself from that and headed off to my final bonus location. 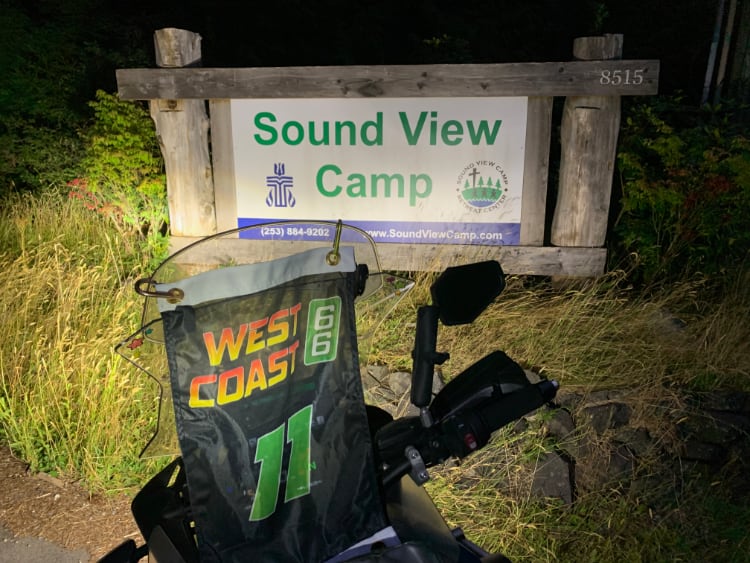 Take a picture of this building at Zittel’s Marina. 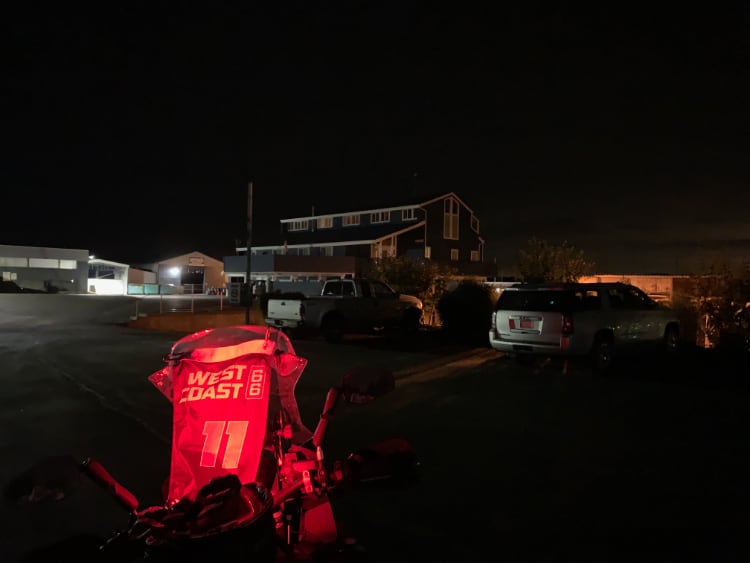 Take a picture of your motorcycle after successfully claiming OW123 and OW193. 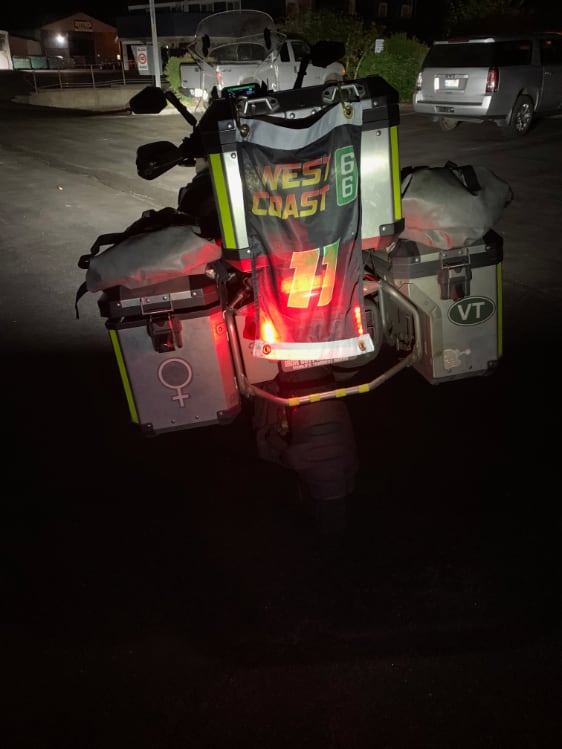 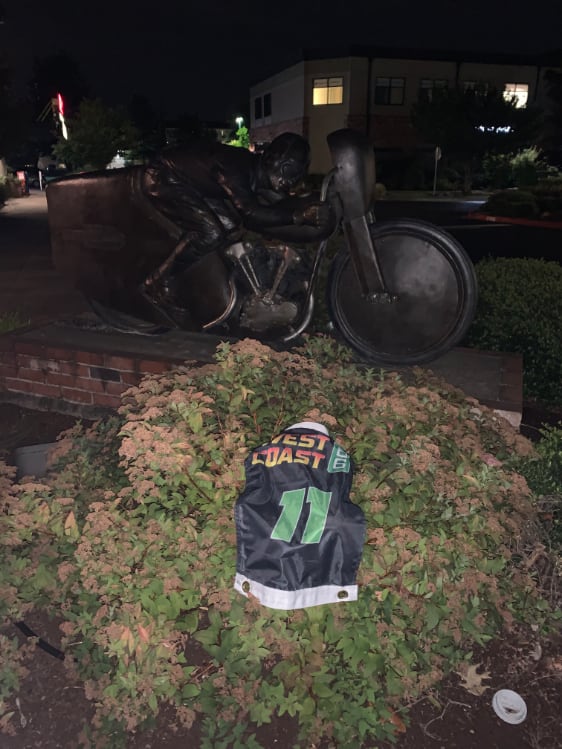 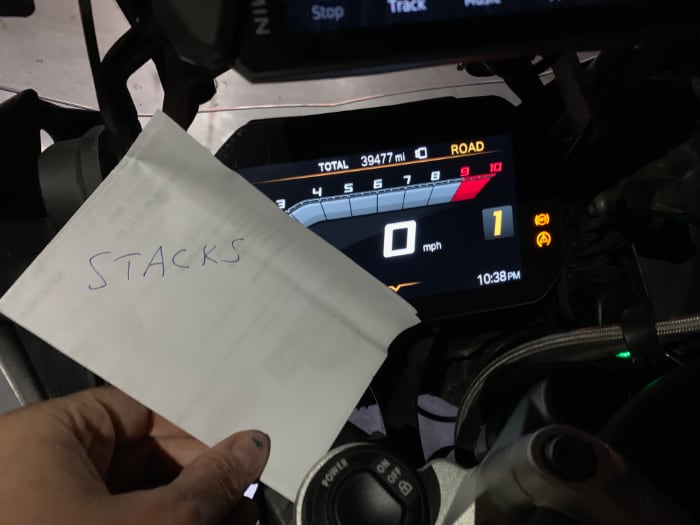 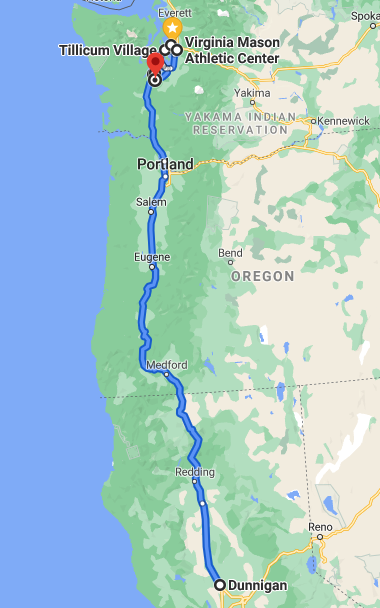 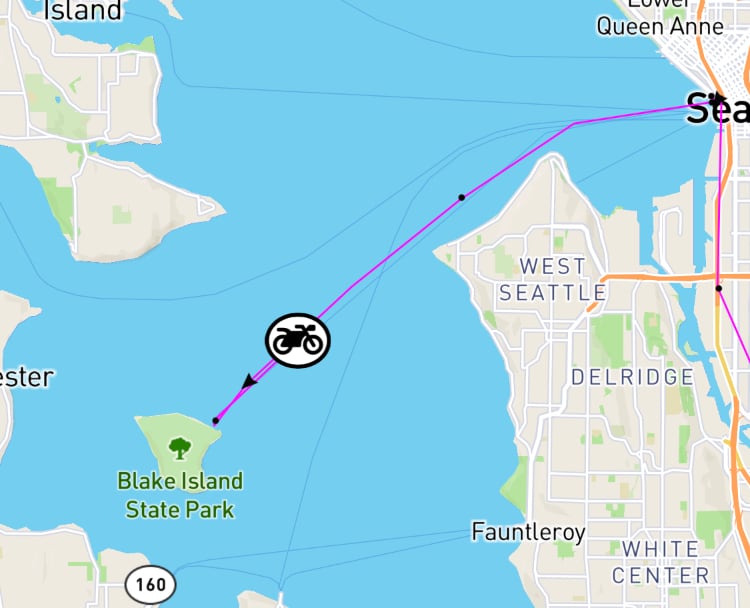