It’s Wednesday night, I’ve had the bonus listing since Sunday; now isn’t when I should be revising my route.

I’d been looking forward to the West Coast 66 Rally since I signed up for it shortly after it was announced. A “virtual rally,” we had our choice of starting locations:

There was no minimum score for finisher status, but we DID have to score both the checkpoint in Lacey and Duarte, and then return to our original starting location.. meaning that no matter where you started, you had more or less the same minimum mileage to ride as everyone else - there was little advantage for starting in one place over the other.

That said.. Lacey <-> Duarte is over a thousand miles EACH WAY.. 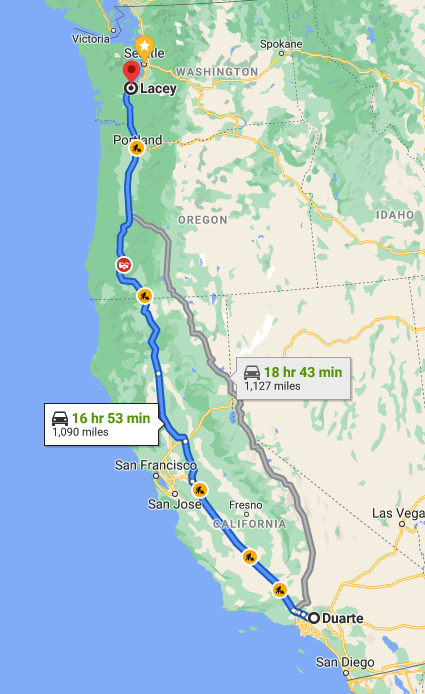 Now, one wrinkle that we didn’t find out about until the last minute - if we wanted or needed to, we could “Rip Cord” and end our rally any of the possible starting locations, but with a hefty point penalty for those that weren’t our own start location.

I fought hard to earn those points, I’m not going to give them up.

I had just a few weeks ago finished my 48-10 ride – 48 states, 10 days, ~7300 miles – so I had confidence I can do the day-after-day mileage, but my overall pace on that ride was pretty low.. but since I was riding in a team, there were other logistics to consider beyond my own. With that in mind, I banged out a Saddle Sore the weekend after getting back, to sort of confirm that riding by myself, I still could maintain the pace I’d need for this rally. It wasn’t really in doubt, but still..

So.. where are we going? 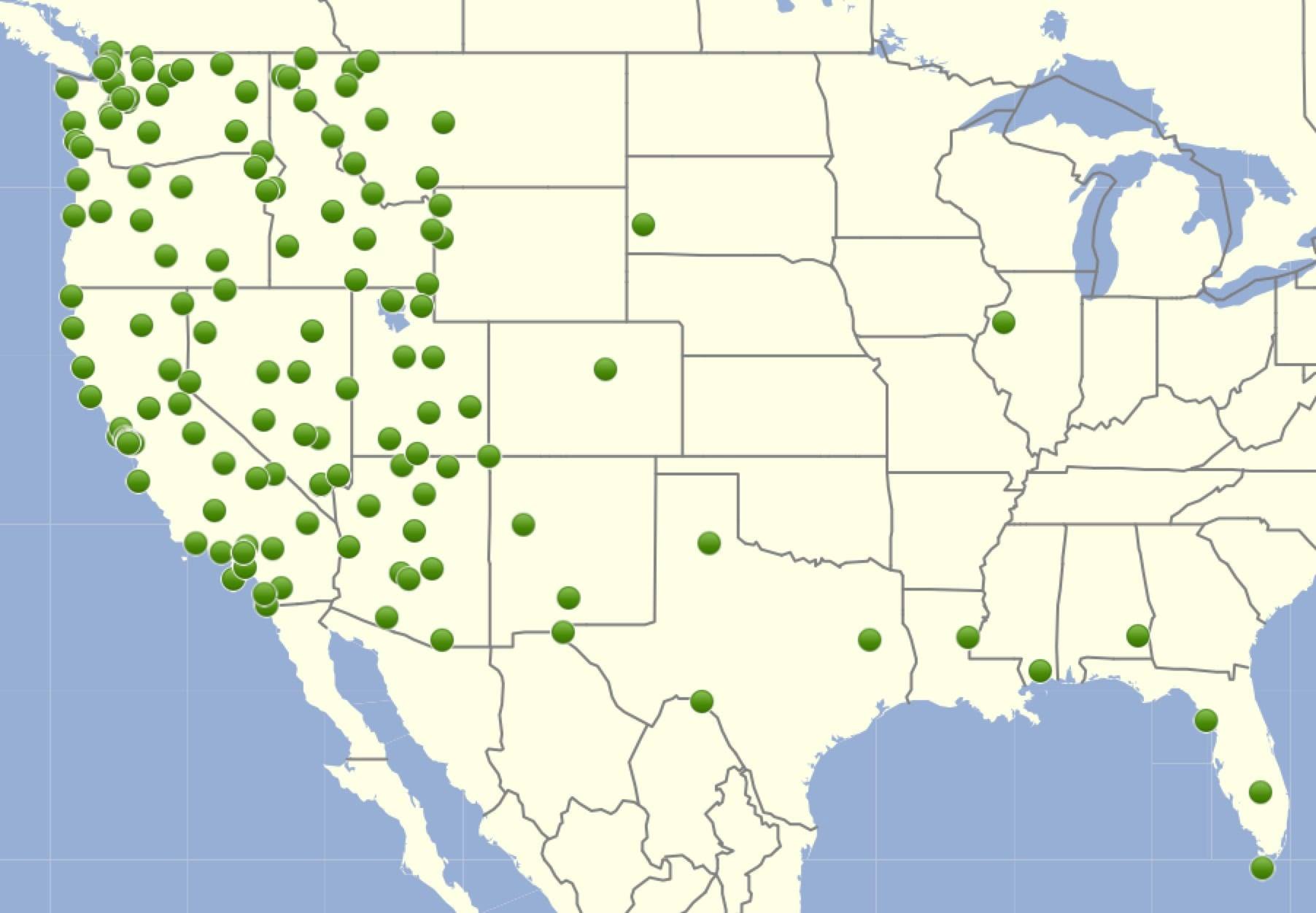 Taking an initial look at the bonus location distribution, and knowing how many “free” hours I have, I immediately discounted not just the obvious “Key West route” (which is just a joke, not a real thing..) but anything east of Salt Lake City.

What does the map start to look like once we start getting some scoring data factored in? 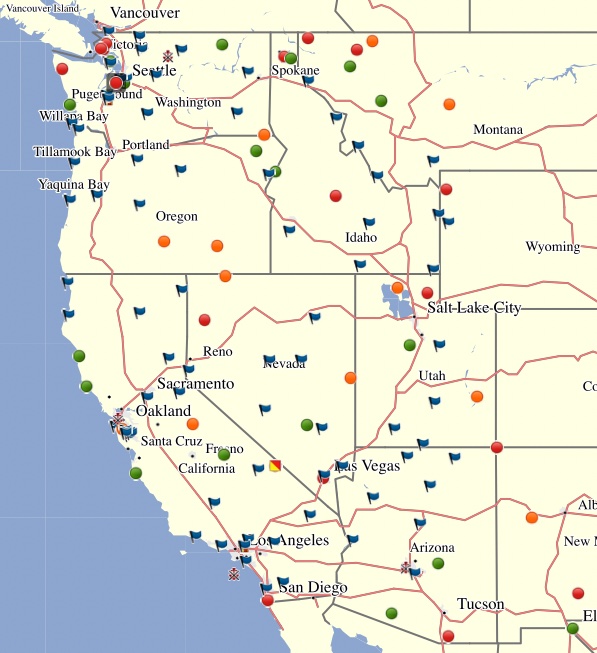 A few rocks scattered around, and a decent spread of points. Seattle had a huge cluster of high-scoring targets, but… 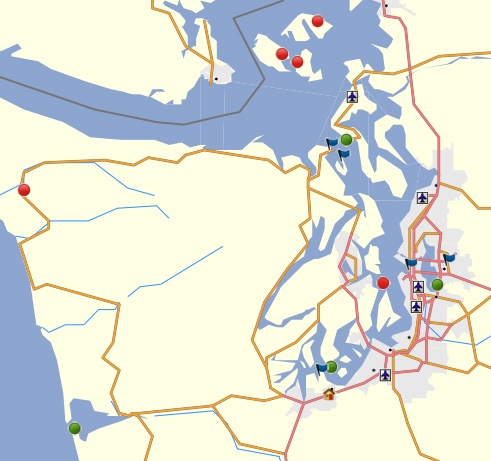 I’m very familiar with not just the ferry schedule, but the current unreliability of the system; on top of general mechanical reliability, the ferry system has a shortage of Coast Guard certified crew… and that’s before COVID and quarantine rules start knocking entire runs off the schedule. Add that fact to the fact that boats are slow, and island hopping didn’t feel like a great option, even with the added temptation of a few combo bonuses to sweeten the deal.

Another large cluster was in Silicon Valley… 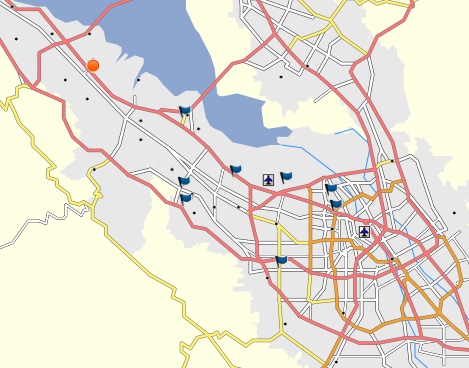 Individually not terribly exciting, totally maybe ~2500 points.. but there were a pair of high-scoring combos available that would net another 15,000 on top of that. Hmmmm…. 🤔

Ok, so I pick up a couple Seattle bonuses, then go down I-5, cut over to the valley and sweep up the Tech Company combos, then to Duarte (just outside LA) and then… go home? Slogging back on I-5, not earning any points for 1,000 miles is a waste. What’s a more efficient route back north?

Well, there were, of course, combos for visiting the coastal bonuses along US-101.. but that is a slow road at the best of times, and on a summer weekend? ..after a year of quarantine? Coastal destinations and parks have been overrun with traffic, so going that way down the coast felt like a trap for the unwary.. and honestly, the combos weren’t worth a heck of a lot. Coming up eastern California, Panamint Springs and Death Valley beckon - the weather forecast wasn’t calling for temps hot enough to unlock the special 10K point bonus for going to Furnace Creek, but 3500 for “under 111F” is still pretty generous.. and Las Vegas is right there with a pair of bonuses that’d net another ~5000… and if you’re already out in western Nevada, there’s a trail of high-value bonuses leading you right back up to Portland, OR. 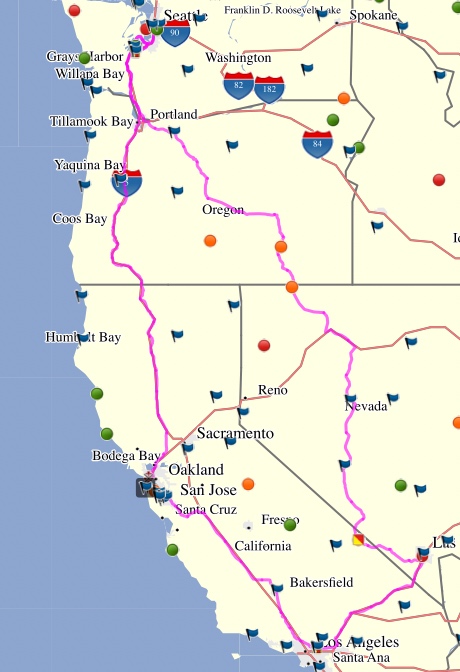 ~2800 miles, but I should land with ~262,000 points. I tinkered with the plan all week, dithering about the exact timing of when to leave and if I’d do the route clockwise or counter-clockwise. Ultimately I landed on a plan to clear out Seattle area bonuses last - if I headed directly south towards Tonopah, NV, I’d be set up for an early morning run into Death Valley before it got TOO hot, and arrive in Vegas early enough to only have to deal with traffic from locals, then roll into Los Angeles around noon, San Jose and the valley for the Silicon Valley bonuses around 7pm on a Friday, leaving me all day Saturday to grind back up I-5 to my home turf of Seattle to pull the remaining bonuses. Always moving against traffic flow, avoiding the worst of the possible heat conditions, and hopefully eek out a few more points from the big bonus along the way as I rode down through Oregon and Nevada… Perfect! We’ve got a plan!