I really, really dragged my feet getting out of bed. The bleating of sheep was soothing, the feather bed warm and cozy, and honestly why would you want to put on sweaty, smelling riding gear and go sit in traffic for hours when you could be cooled by ocean breezes while sitting atop a grassy bluff?

I guess I’m one of THOSE. 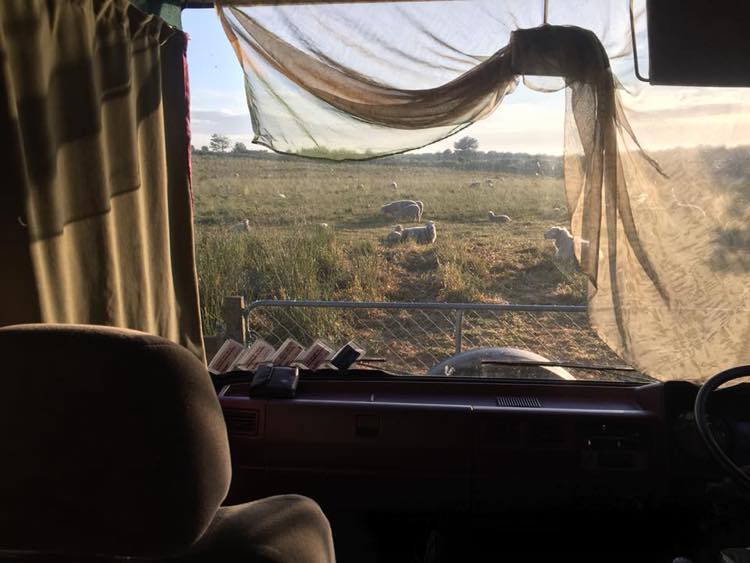 Eventually loaded up, while Ken told me about his motorcycle accident that convinced him he was “too old” to be riding machines. I know he meant well, but man, you’re making me nervous!

Rode down off the bluff their neighborhood is perched upon back to downtown Oamaru, merging into the endless tar and metal snake that is NZ 1. More or less straight for a couple hundred kilometers, it is THE main road for eastern New Zealand and the coast. It sits in that horrible place where there isn’t enough traffic to justify it being a 2-lane divided motorway (like our US interstates) but enough traffic for 6-10 car backups behind farm vehicles. Outside of towns, the speed limit is 100km (62-ish mph) but I was averaging 85 for the trip. Endless flat greenery, this is where the “big farms” are. Combines and tractors.. large dairy and beef herds.. milk processing plants.. field of potatoes and canola.. it is the bread basket, for sure.

I stopped in Timaru because I just couldn’t take it anymore, my choices for a place to sit down and grab a bit of breakfast limited to gas station grazing, KFC, or McDonalds.. So McDonalds it is! Lamb sausage McMuffin and a flat white from an actual barista. Not quite a taste of home, but nice to get a bit of America filtered back at me through a New Zealander’s lens.

I turned right off of NZ 1 at last in Burnham, and my mood immediately improved. Still flat agricultural country, but no traffic! I stopped for gas in Tai Tapu, checking the tires.. yup, got a little squared off from 2 days of straight, flat riding. I even said it out loud to myself, “Wow! Really squared those up..”

Of course, the road was about to help me with that! Akaroa is a bit of a resort town at the end of a long fjord, popular with cruise ships. The single road in is 50 km of twisties, hairpins, and stunning views as you work your way over the ridges and folds of an isolated miocene era volcano. Relatively close to Christchurch, the road felt like it was made for motorcycles, dipping and curving and driving up and down and over and around, and by now trusting the bike I pushed it harder and harder through the tight turns, thrilling at each moment. This can’t last forever, can it? 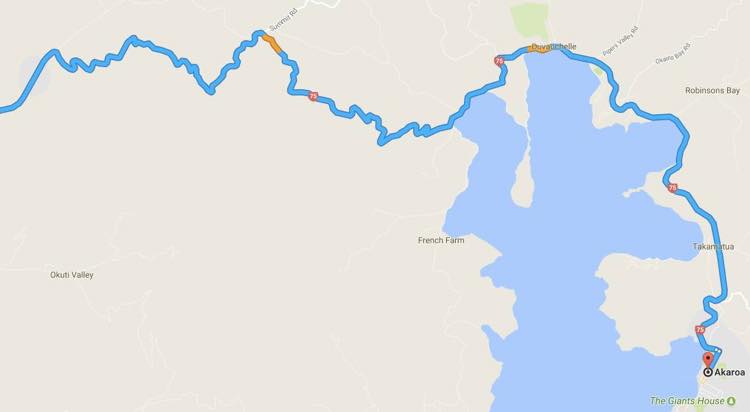 The kind of road that makes you turn around and ride it again..

Stopped for a bite at the Hilltop Tavern, which overlooks the harbor. Sweeping views, good coffee, and a passable burger are all I need to be happy. Chatted with the waitress, who is French, and learned more about the history of the area. Apparently the French tried to establish a whaling station to establish a territorial claim, which accelerated the British colonizing efforts. The French secured colony rights with the local Maori, then headed back to France to pick up the settlers. While they were gone, the British came in and set up shop, so when the French settlers arrived they found their hoped for new home under British development. With no where else to go, they settled down under Crown rule, but brought French place names, religion, and colonial architectural style with them. It is a pretty town, if a bit of a resort vibe from the 80 or so cruise ships that dock there every year. 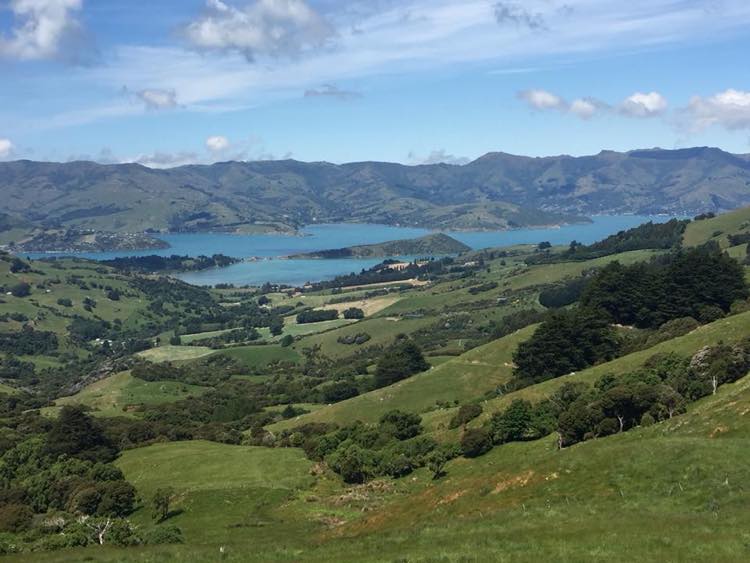 Akaroa, from the Hilltop Tavern

I road 3km out a narrow, twisty asphalt to meet Ollie, my host for the evening. He was running late, but his dad showed up and helped me survey the steep gravel road down to their place, perched on a steep jungle hillside above the water. In retrospect, I totally could’ve made it on the VStrom, but I was tired and Ollie’s dad was sort of hovering and making me nervous, so I just parked the bike by the road and unpacked what I needed for the evening — this place is rural enough that no one was going to bother the bike.

By this point Ollie had shown up. He and his dad are both yacht builders and mechanics (docksmen?) who have built out these little cabins on their property and rent them out to tourists like me. Ollie’s side of the property is only accessible by this 8” wide dirt path winding about 100m across the steep hillside to where he has 2 tiny off-grid cabins. His main cabin is an amazingly well-built tiny house, just under 10 square meters, all solar and spring-fed water. The bathroom was gorgeous, a composting toilet, but with a great view, an the shower was endless hot water and open so you could wash your hair AND watch for dolphins in the harbor..

My cabin was a delight! Solar power LED lights inside, a sort of a-frame, 7 feet wide, 4 foot high at the peak of the roof, a giant queen-sized mattress and feather bed taking up most of the space. The ceiling slid aside to reveal half the roof were massive glass windows, and the tiny porch was perfect to sit on to watch the sunset while eating fresh raspberries that Ollie brought over from his garden. 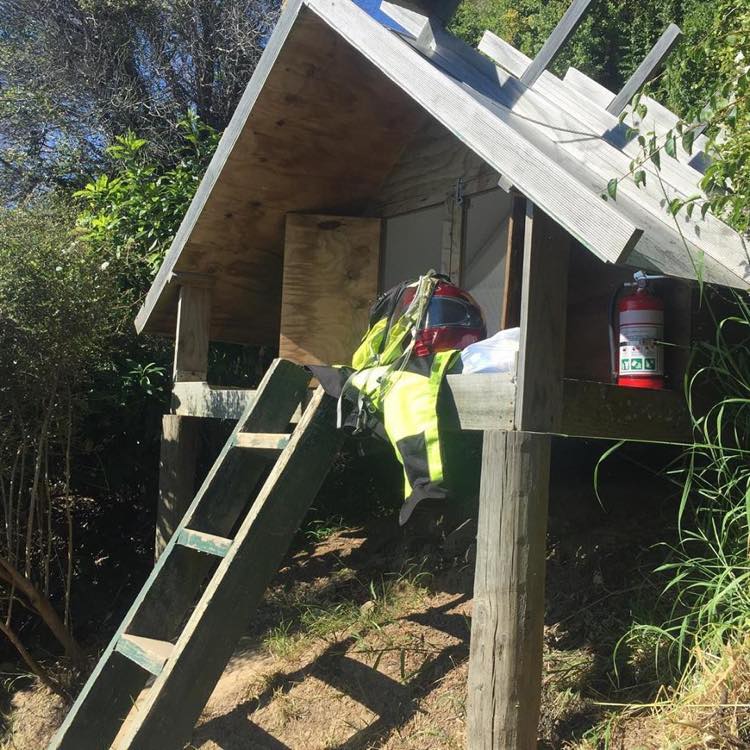 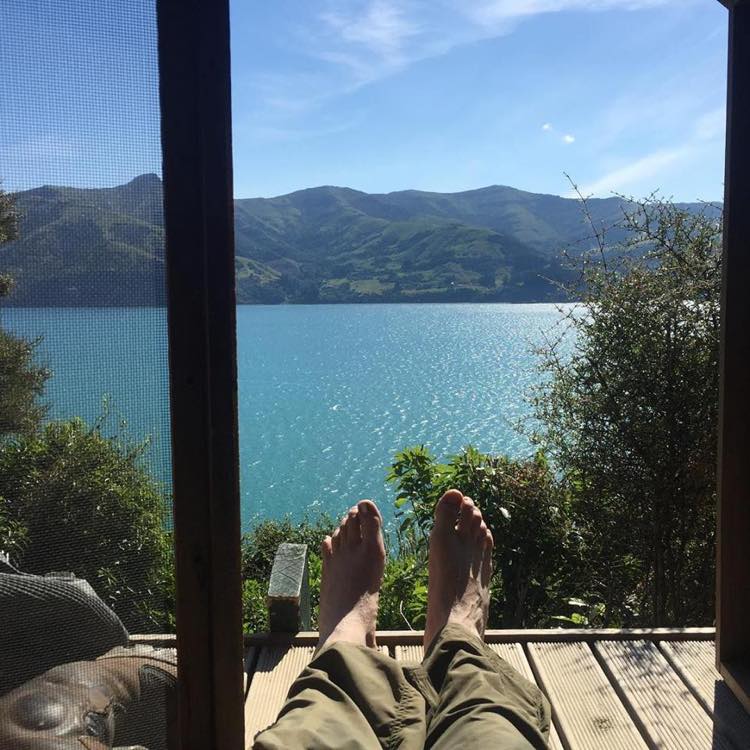 Not a bad view from my front porch!

Finally, a night in the country with no cloud cover! I fell asleep waiting for it to get truly dark, but woke up around 2am and sat out on the porch for 2 hours looking at the Milky Way, constellations that were new to me, and spotting satellites. I finally got to see the Magellanic Clouds! There was almost no light pollution, and it was a clear dry night, so once the moon had set (around 3:30am) the view was brilliant.

I went for one last pee before collapsing back into bed, and walking back was thinking about all the stars and constellations I have finally gotten to see - Canopus, the Southern Cross, the Magellanic Clouds.. and how my touch-stone constellations like Orion and the Pleiades hide here in the south over our northern summers, when I came around a bend in the trail and BAM I notice 3 stars in a row.. Orion’s Belt! ..but of course, Orion is UPSIDE DOWN! :D ..but there he is, and there are my Pleiades shining in the northern sky.

Tomorrow I ride back to Christchurch, for a day of cafe sitting and shopping, laundry and packing. My time left in New Zealand is dwindling away, and I can’t think of a more magical 2nd to last night than this. 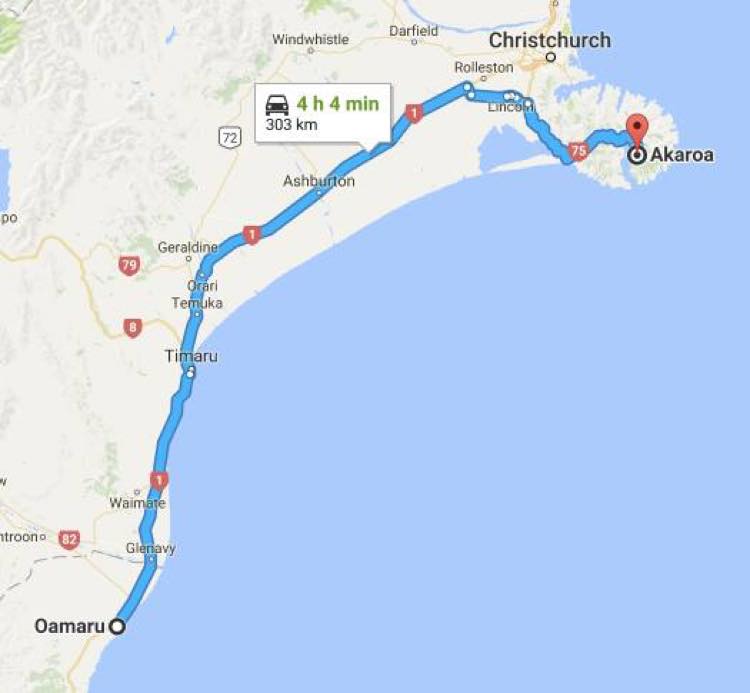