Today was a loooong day - 401km on the odo. I woke up at 6:30am, my body clock set to OMG o’clock by the screeching kaka parrots in Wellington the week before. I had played a couple hours of poker at the casino, had a few beers, and while beer has been a lovely addition back to my diet the past month or so, it comes along with the kind of hangovers I never really experience when having wine or hard spirits. How I can wake up feeling like death after a single pint of lager, but can drink 2 or 3 double whiskies with no ill effect is a mystery.

lounged in bed, watching videos and catching up on email until 8, then packed up the bike and went for a quick coffee and cheese scone at the next door cafe. I only managed to forget one bag! Of course, its the bag with my meds in it, but I’ll survive until I loop back to Christchurch on Friday and pick it up from my hosts…

Side note on scones - the savory scone scene here is bananas and I love it. Butter is served along side it, mandatory. I approve.

Cell phone coverage has been an adventure. When I landed in Wellington, I bought a $30 SIM card from Vodafone that gives me 200Mb. I’ve managed to ration it to only navigation and “I really need to look up info in that one email” uses, and still have ~120Mb left on the account. Luckily GPS mapping works even when I don’t have cell coverage or service (but heaven help you if you get off route, since it can’t recalculate on the fly..)

Found my way through Christchurch to the “main road.” Everyone will tell you, “In New Zealand, give yourself extra time” and you should listen to them. The default speed limit in towns is 50kmh (about 30mph) and when unposted, it is 100kmh (62mph).. HOWEVER, they don’t drop the speed limit for curves, hills, blind corners, etc, simply posting yellow advisory speed signs. That’s fine while you’re riding, but in planning, Google Maps has no idea what the road actually is like, it just assumes you can travel at near 100% the posted speed.

Grey skies loomed, so I stopped in Springfield to add in a base layer and a top off of the gas. There’s a giant pink donut in the town square that was part of a promotional effort for the Simpsons movie. The photo I took didn’t come out, but its bright and shiny, and almost unmissable.

Once out of Springfield, the sun started to peek out and the temp, which was hovering around 14 or 15C (60F) began to climb as the road blasted me straight through dairy and sheep farms. I dodged cow pies and tractors, and soon the road began to twist and climb up towards Arthur’s Pass. I stopped in at Castle Hill, where some folks in Flintstones costumes were doing a photo shoot, and LotR tour buses were unloading. Back on the road, the trees disappear and the landscape began to look like The Highlands of Scotland or Iceland, with the addition of large swathes of Scotch Broom and purple loosestrife. The road is tight, steep, and twisty, and was a bit of a chore to maintain any kind of speed. 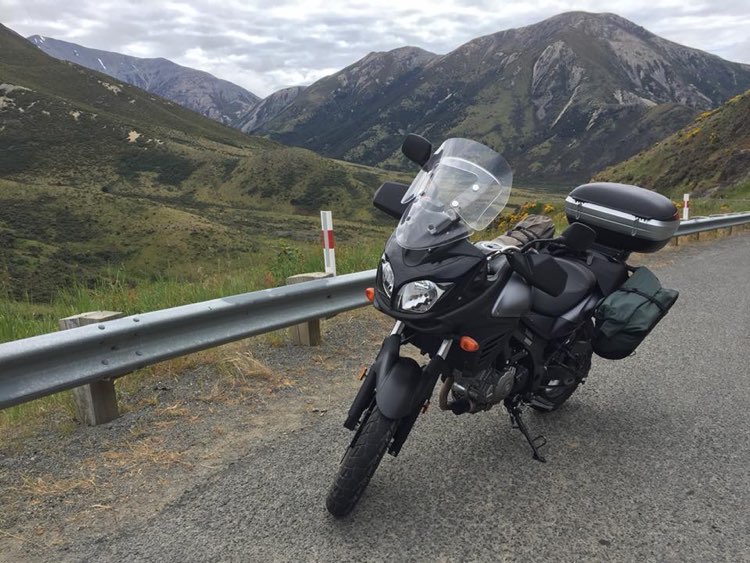 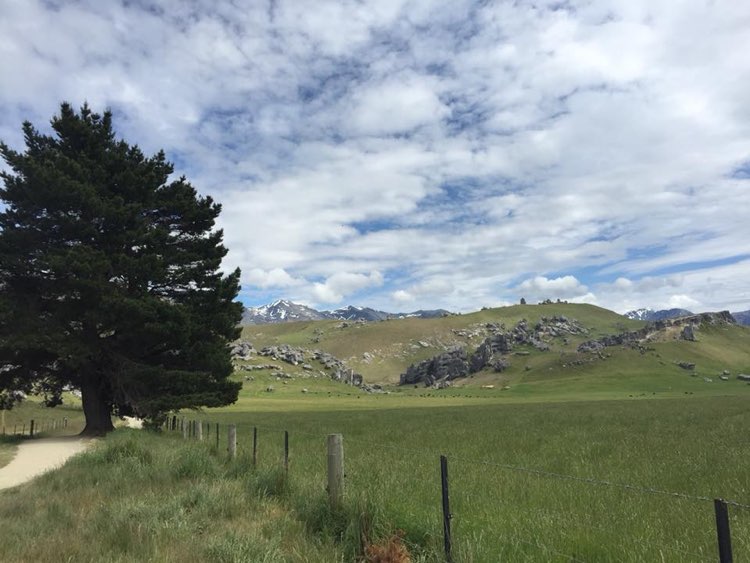 One feature of the roads here are the single Lane bridges. They have good signage about who exactly has the right of way, so there’s little of the passive aggressive “No, you go, I’ll wait” baloney, but still.. I’m on THE major east-west road, and then on THE only road along the west coast.. there simply isn’t enough traffic on these roads outside of the towns themselves to justify larger bridges.. in fact, traffic is so light that major sections of these roads are closed late at night not because its dangerous but because there’s no need to patrol them, and they don’t want folks getting into trouble late at night and have to wait until morning to get rescued! 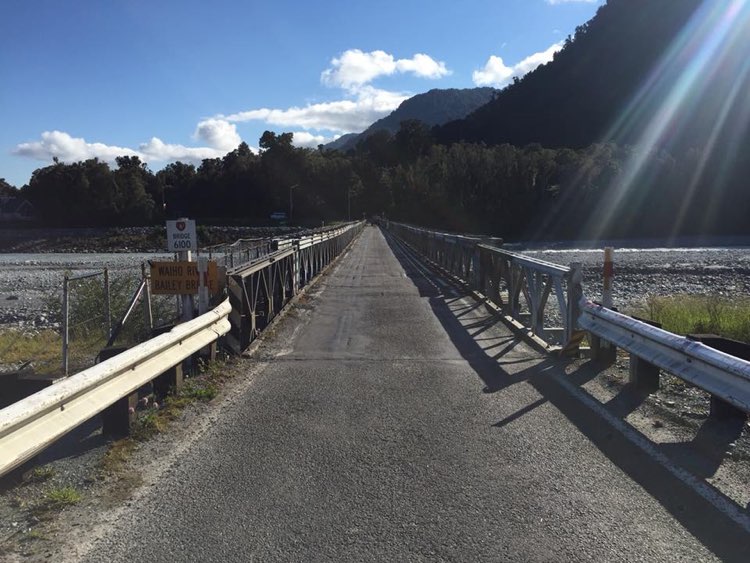 Don't let the rough surface fool you.. most roads were in great condition

At a certain point, the endless craggy heather turns into high-altitude forest, and I stopped in Arthur’s pass for the obligatory coffee and egg & bacon sandwich while sitting in the sun. A Kea hopped over and stood a foot from me, then darted in with his huge beak, startling me, squawked with a little laugh when I jumped back, then grabbed half my sandwich and flapped to the next table to eat it while staring at me with his mischievous black eyes. Cheeky bastard. 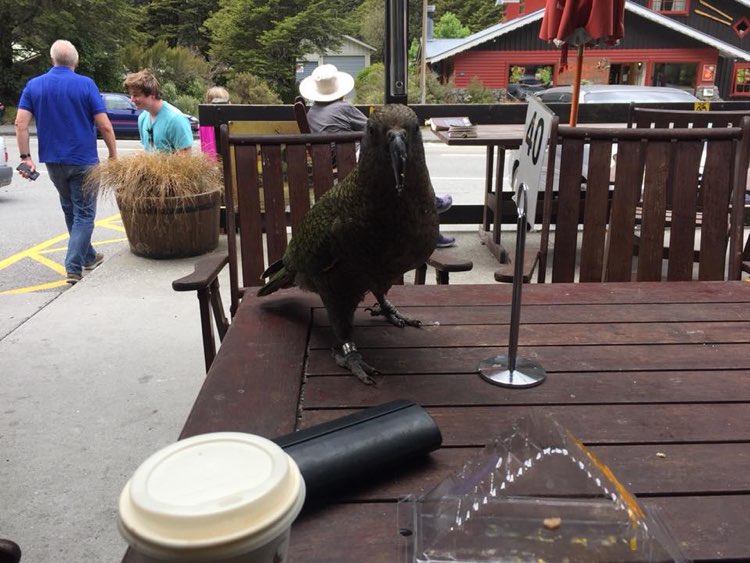 Wanted for the theft of a sandwich

Back on the bike! I got some photos of the Otira viaduct, and began the long decent to the coast. 2 kilometers past the viaduct and the forest slipped into rain forest as I could begin to smell the moisture. Sheep farms began to appear, mixed with dairy, early haying seems to be going on this week as well, the smell of fresh cuttings in the air. 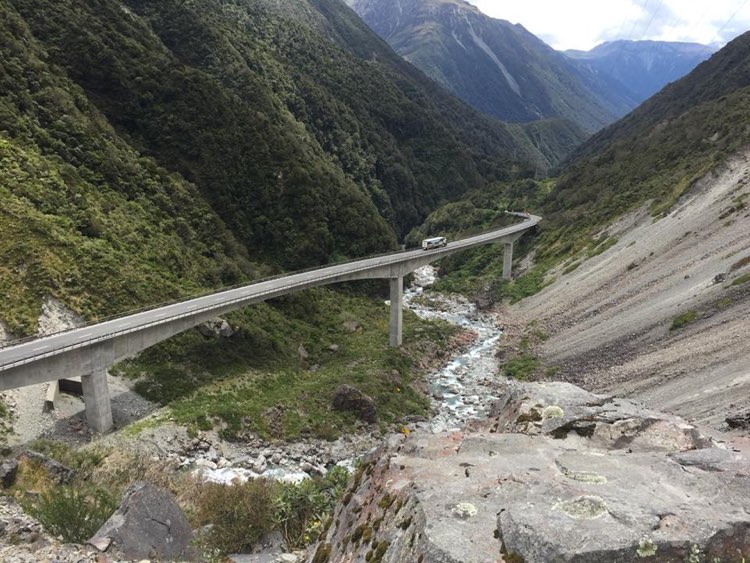 Hit the coast and saw for the first time the Tasman Sea, as the road banks left down the coast. Strangely enough, I spotted a pair of elk ranches, but no tours today! The temp climbed up to 24C and I was starting to sweat a bit.. glad for the vented jacket, but ready to shed the base layer next time I stopped.

Finally made it to Hokitika a little after 2pm and stopped for a bite to eat. Hokitika is a town full of artists - glassblowers, jewelers, and book stores line its streets, and it caters to the “weekenders from Christchurch” crowd. Ordered another iced coffee, which the barista apologized for.

Barista: “Our iced coffees have ice cream in them, is that ok?” Me: “Are you kidding?! That alone is reason enough to love your country!” Barista: “Oh thank god, some tourists get really upset about that…” 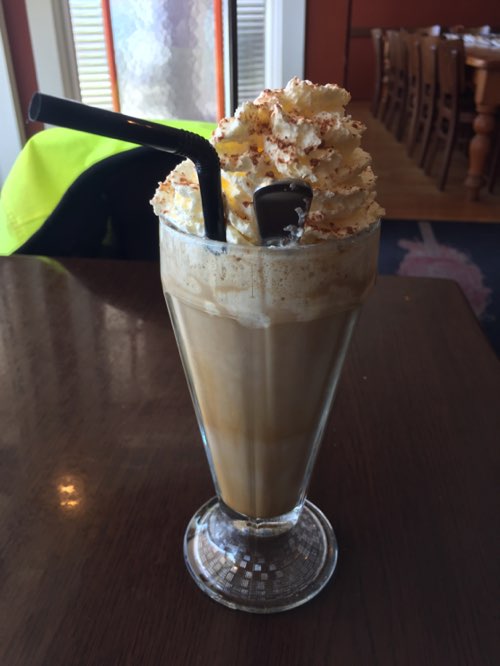 Went and sat by the tiny beach and watched the surf.. was going to hop in but the tide was up and there was a surf warning posted.. ah well. I stopped by the “Glow Worm Dell” and was disappointed - apparently its only worth taking a look at when its nighttime, but the idea that there is this fern-covered grotto that is just public land, not a private tourist attraction.. what kind of communism is that?? 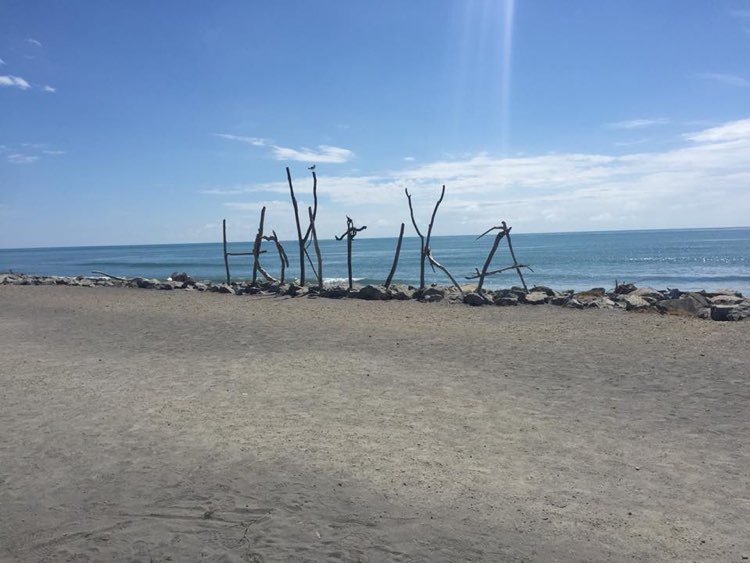 It only looks like beach art.. this seemingly temporary sculpture is heavily featured on signs all over town.

Back on the road! Only 120 km to go.. 20 minutes out of Hokitika, a wall of grey clouds appeared, and I quickly toss on my Frogg Toggs. SUPER glad, as the temperature started dropping, hovering around 18C and the rain came and went. The road was almost entirely deserted, so I spun up the bike and sat around 115kph (72mph) for long stretches, trying to make up time lost in all the hairpins, blind corners, and single-lane bridges that were slowing me down.

Finally got to my hostel in Franz Josef Glacier shortly after 5pm, a long 8-hour ride across some amazingly varied landscapes. $35NZD ($24USD) gets me a top bunk, free wifi, and a pair of 20-something roommates in my 4-person bunk room.. it’s not the worst hostel I’ve ever been in, but its a little busy. I’m hoping the lamb burger and pint of “Mischievous Kea IPA” at the brewpub down the street will help me survive, but the coffeeshop next door starts breakfast at 7am. Tomorrow I ride towards Queenstown, a mere 350km.. going to be another long one, through another mountain pass, so an early start is advised! G’night, friends. 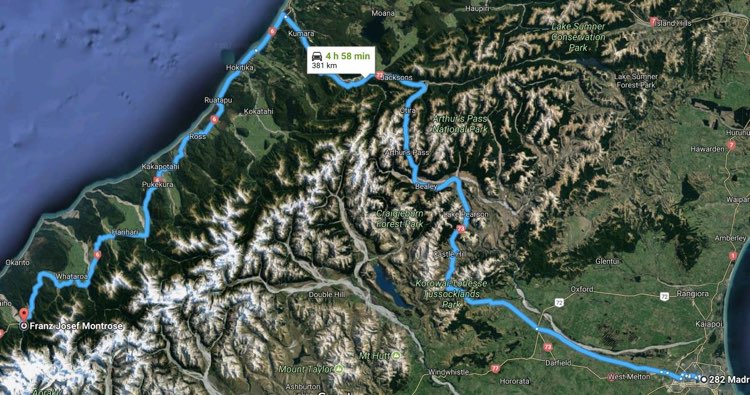