Coming into this rally, I wasn’t entirely sure I had 100% to give.

Not because Gary and his team don’t put on a top-notch event, but because I was still feeling the effects of running the West Coast 66, then a week at Disneyland, overlaid with 2 weeks of “review season” at work.. lots of physical, mental, and yes, emotional stress in the weeks running up to NxNW, and I just didn’t feel as competitive as I normally do going in to an event.. but I knew I was going to show up and give it everything I had, but I had emotionally accepted that I wasn’t going to do anything heroic.. instead I was going to have a good time and be competitive.

Another factor in play here is that last year’s NxNW was the only one of 4 rallies that I was signed up for that actually happened, thanks to COVID-19.. and this is what we woke up to on day one… 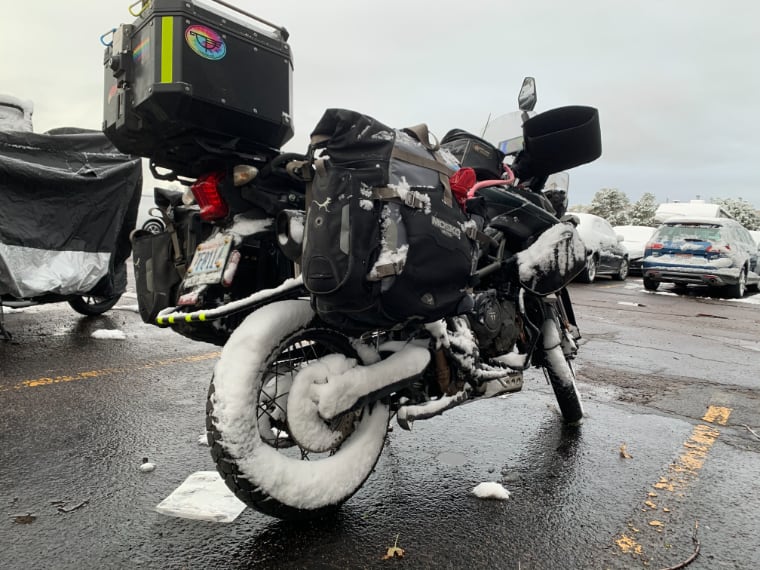 In the end, the adrenaline of my only rally of 2020, the snow, a GPS snafu in Grand Junction, CO, and a bike that didn’t have the real long-haul strength I needed combined in a DNF. I had some “unfinished business” to attend to.

With that in mind, I got up early on Thursday (9/9) and rode down to Bend, OR from Seattle, an easy ride that I’ve done 3 or 4 times now this year; funny how I keep retracing my steps lately. A 5-hour ride down, I got in around noon, had a big salad, and kicked around for a while, talking bikes, saying hi to folks. Lots of people congratulating me on the WC66 win, and to introduce themselves.. I know a lot of people by faces OR by their names from social media, but have a hard time connecting the two.

Dinner was to be at 5:30p, so I took a nap and then got my computer and GPS set up (or so I thought..) Garmin and Basecamp don’t work well on the Mac, but that’s all I have, so I had to make it work. Mostly the problem is that the computer itself doesn’t always recognize that the GPS unit has been plugged in, forcing you to unplug it, restart the unit, replug it back in, wait for it to switch into file transfer mode.. wash, rinse, repeat for ~20 minutes, until Basecamp finally recognized it. I left it in place, disabled the power-saving options, and went to dinner.

The NxNW team put together a great dinner for us; 22 riders, we split across 3 big banquet tables for a buffet-style dinner, and finally Gary came out in a Johnny Cash wig to musically introduce this years theme - Ring of Fire! We’d be visiting a series of volcanos and volcano-themed locations, along with a smattering of stops from last year’s rally. We’re set free at 7pm, and scurry back to our rooms to begin planning…

…which is when I ran into the first obstacle, that my GPS unit was hogging the only USB port, so I could unplug it to access the rally book and data files on a USB stick that each of us received, OR I can wait until the rally master’s email containing the same files finally came across the wire. I opted to wait for email.

..then, of course, once I started working through the routes, I realized that Basecamp was being UNGODLY slow for some reason. It took me about 30 minutes to diagnose and solve, but a combination of A) being left open for a few hours, plus B) a small version bump in Basecamp rendered it incompatible with the up-to-date software on the device.

Anyway, once I got all THAT settled, I’d lost 35-40 minutes. I quickly got to work sorting the locations and combos. 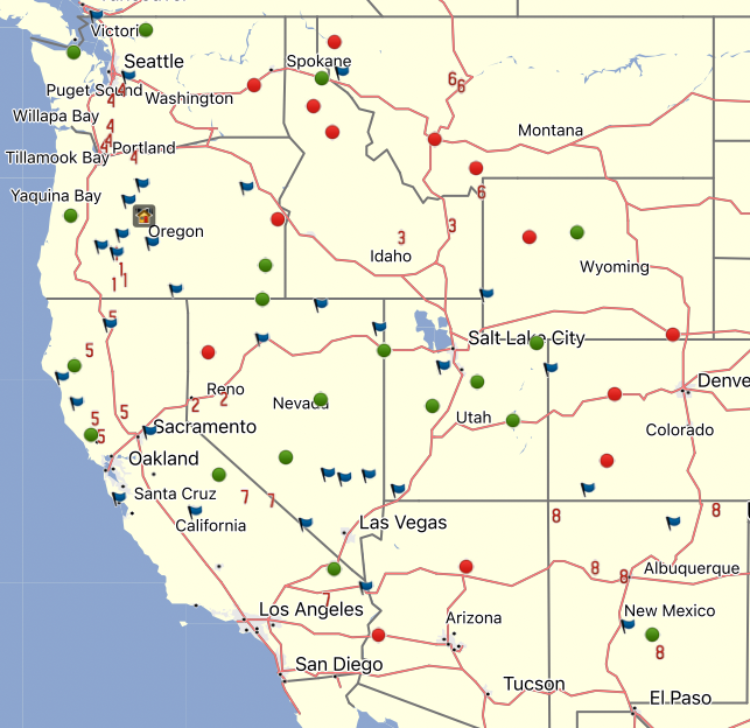 The only real combos were based on hitting groups of volcanos in different states. After my 3 weeks in Utah, the 48/10, then the WC66, I was just about done riding in western deserts, and found myself longing for trees and mountains. If I’ve already decided that I was going to pull back a little and not compete as hard this weekend, then why not simply go where I want instead of where the points take me? I discounted almost immediately going south, even though some quick math said it MIGHT be a higher scoring route - I simply didn’t want to go there again if I could avoid it. Instead, I put together what seemed like the highest value route for the northern half that I knew I’d be able to complete – finishing this one was the priority. 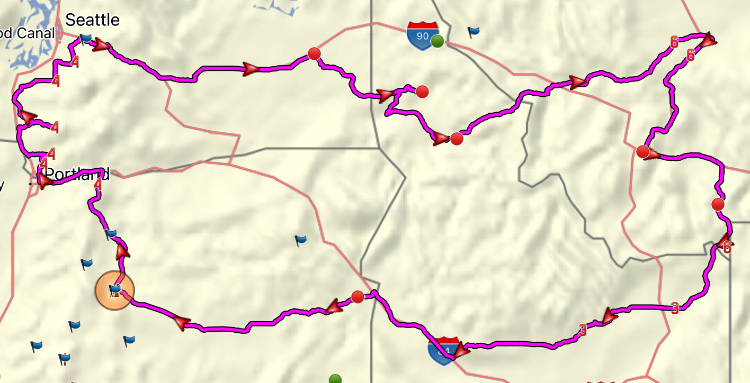 My final plan, then - head north and sweep up the Washington state combos, then drive east towards Spokane. Cut southeast to Lewiston and pick up the Eagle River, ID and Lolo Pass bonuses. Somewhere in there I stay over 4-5 hours.. maybe in Lewiston, ID.. then back up to Great Falls for a 2 of the 3 Montana sites, back south through Gallatin to West Yellowstone to clear that bonus. Stay over in West Yellowstone or Idaho Falls for a full 8 hour rest bonus (5 pts/minute) and then due west, picking up the Idaho combo and a high-value location in eastern Oregon. It penciled out at around 56 hours, leaving me with 4 hours of unplanned time.. but feeling like I was only at 80% or so, I didn’t really feel comfortable not leaving more of a cushion, time-wise… and besides, it was after 10pm, so a quick chat with Coach Jo and off to bed I went, with 4 different alarms set for 4am.. 4:10am.. 4:15am… 4:20am.. rider meeting at 5am, KSU at 5:30am. Let’s get some sleep…