Waking up at 6:30am every morning is advantage when traveling on your own, but I was sore and tired and facing 2 more days on the road, long days of retracing my steps — my least favorite route. Still, its on a motorcycle, so its not that bad!

I packed up the bike and we said our goodbyes — Michelle is an A+ traveling companion, and I hope we get to do something like this again! Rolled out into the fog and wind at 7:45am, wiggling through the city to I-80 and the Bay Bridge was windy but fast - no one, and I mean no one, was going anywhere NEAR the 50mph speed limit, so it would’ve been irresponsible of my to moderate my own speed, right? Oakland, Berkeley, Richmond, Vallejo all pass by. I stopped in Vacaville for coffee and a breakfast sammie, then back on the road… and missed my turn onto I-505 because of a podcast getting really interesting right at that moment! I realized my mistake in a few miles, and took some back roads across fields and orange groves, losing 15 minutes and adding a few miles, but not really much of a hassle.

I-505 north along the western edge of the Sacramento Valley, staying well away from its namesake. Eventually we merge onto I-5 just south of Dunnigan, CA, and now all we have to do is stay on this road for the rest of the day. The weather was perfect, oscillating between mostly cloudy and overcast, but no rain or wind. I had originally been planning to head north along US-101, but with storm warnings and wind advisories along the coast, I elected for the boring inland slab of I-5, and for the most part I made the right choice.

I stopped in Redding, CA for gas, and of course it was that one exit where there’s “gas” but the station is 3-4 miles off the road, and it was a sketchy station to boot.. I’ve had my debit card number skimmed twice at mom-n-pop gas stations, so I’m extra wary now, but I needed gas and the scanner looked clean, but I didn’t go in.

The next few hundred miles of I-5 are great, starting with crossing Lake Shasta and climbing up into the Shasta National Forest. The temperature started to drop and cold, icy rain made an appearance just north of Pollard Flat, but I thought I could stand it until I made Weed, CA another 30 minutes north; I wanted to stop at my favorite diner there and get some gifts for people, but when the hail started I knew I had to get off the bike and someplace dry and warm. Stopped in Mt Shasta, 10 miles south of Weed, and got a seat at the counter of a local chain. Worst service I’ve experienced in a while, the food was poorly prepared, and what should’ve been a 30 minute stop dragged into an hour that I regretted wasting. The storm had passed and things were drying out, but Mount Shasta itself was hiding.. disappointing, as I’ve driven this way so many times but still haven’t seen it!

Slog slog slog… got to Grants Pass, OR around 3pm, ~410 miles north of San Francisco, 420 miles to go to Seattle. Far too early to stop, so I kept going north north north, past Roseburg, Eugene, Albany, Salem… weather was great, bike was fine, I was tired but still had plenty left in my own tank, so why not chew up some miles? Stopped just south of Portland, OR as the sun was setting, and stopped at a Sbubby for a bite to eat.. I swear, it takes a minimum of 30 minutes anytime I stop to eat anything. Hell, it took 15 minutes just to get to my order, as a minivan full of very specific people were in the drive thru. I mean, sure, Sbubby is great when you know what you want, but yelling orders for 8 vastly different, highly specific sandwiches through the tinny speaker of the drivethru was a nightmare for the guy at the counter AND me.. oh well. I got my dinner in and kept going. The Tiger has such great lighting at night, I never feel too hesitant about riding at night on it, especially not on the interstate.

Portland was a breeze this time of day, and I managed to get through downtown on I-5 at something resembling a reasonable highway speed, crossing the Columbia into Washington state - home at last! I gassed up in Kelso, WA, and feeling pooped I grabbed a seat in another regional diner chain for a slice of pie and a coffee around 9pm.. of course, it was prom night, and with no Denny’s in town, the place was filling up with tuxedo’d and sequined teens, delaying me another hour.

It never fails - if I sit down in a restaurant, it takes an hour, no matter what.

Finally got the bill paid and was back on the road at 9:55pm, feeling really tired now, and rolled north again, only a couple hours from home but paying very close attention to my reactions and attention. I stopped at the Grand Mound rest area to stretch my legs and realized that no, I was very, very tired when I sat at a picnic table and could just feel the exhaustion of a week of travel and a long day on the bike just sink through my bones. Despite being very, very close to home, I decided to get a cheap motel in Olympia, WA and crash for the night. I was in bed before midnight, ready to tackle the rest of the road home first thing in the morning. 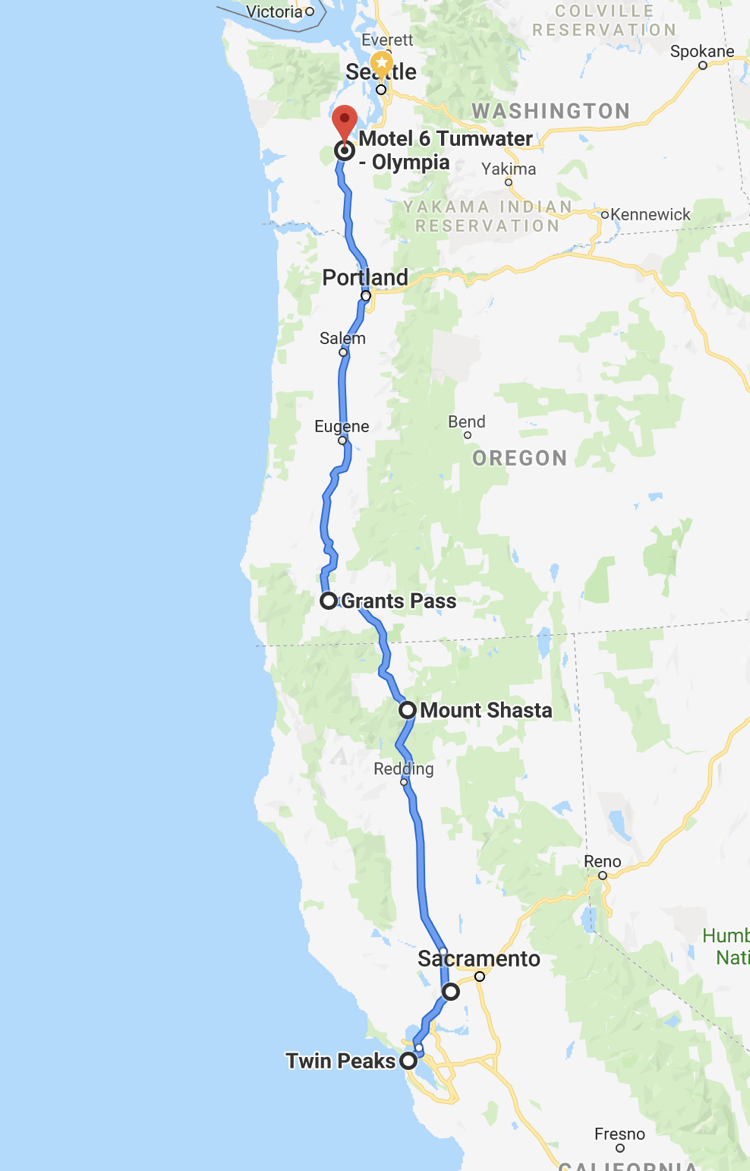