A short update tonight, as I’m tired and sunburnt. Worked 6:00am-11:30am, then gassed up and programmed the Giggle Lady to take me to the Pullman National Monument hey wait it is closed today whaaaaat? Ok, back to Starbucks for wifi, laptop propped on the sidecase, furiously trying to find a passport stamp for Illinois that I could hit while passing through Chicago. Found the Chicago Portage National Historical Site, which is the continental divide between the St Lawrence and the Mississippi watersheds! Back in the day, they dug a canal, the I&M, between the two, which when you add in trains, spurred Chicago’s growth as a hub for development of everything west of the Appalachians.

Great! Sweet! 2 hours from Rockford into Chicago, no sweat.. except there was sweat, LOTS of sweat. The predicted high of 84F was actually 95F, and the “breezy” was “gusty with a dollop of humid” – really miserable, hot, sticky, and the sun was beating down.. ugh. Classic Chicago heatwave day. 2 hours turned to 3 with traffic snarls, having to stop the bike and dig for change for automated tollbooths that didn’t register that I’d paid.. I’m probably getting a huge traffic fine, but I gave up and just blew through most of the tollbooths. Supposedly you can pay online, but there’s no way to search for what you owe until AFTER the 7 day grace period.. Chicago, you’re a mess, your roads are trash, and your drivers.. my god. The speed limit is 55. I’m going 85 to keep up in the middle lane. I’m getting tailgated, honked at, blown past on both sides.

No wonder so many new riders are scared of highways! If I didn’t have thousands of miles of highway experience, I’d be frustrated, scared, intimidated by this mess, too. 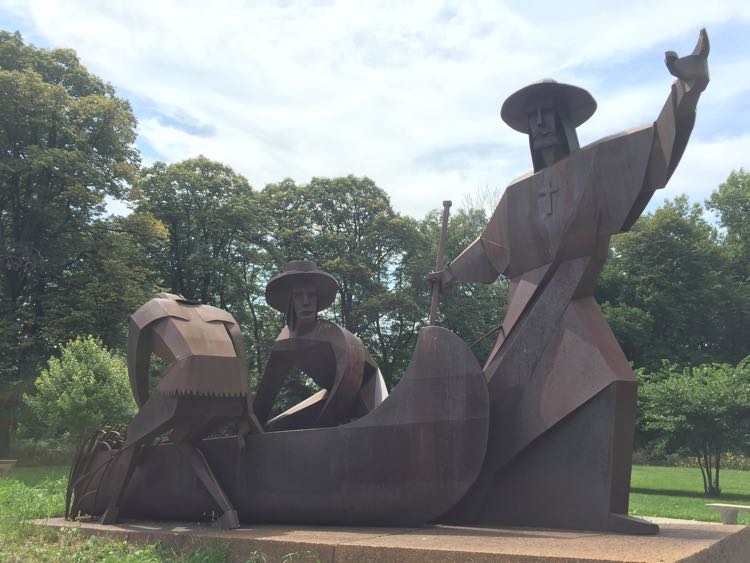 Of course its some religious dude forcing a farmer and a Native American to carry his stuff...

Ok, so I arrive at the Chicago Portage NHS, and.. there’s no visitors center. There’s one on the map. There’s hours listed on the website. I call the number for the park listed on the NPS website and it goes to voice mail: “This is Glenn’s phone, leave a message.” What the what..? I do some googling and find out the “visitors center” was actually some kind of trailer, like one of those “temporary classrooms” some schools have, or those offices at construction sites.. well, that’s long gone, and the stamp has been moved to the Little Red Schoolhouse Nature Center in Willow Springs, IL - 25 minutes away…

I mean, what else am I gonna do with my time, right?

That LRSHNC (I refuse to type that out again) was actually splendid, a one-room schoolhouse that was used until the 1950s, plunked down in the middle of what is now a forest preserve of Cook County, 69,000 acres of forests, ponds, sloughs, marshes.. I never knew Chicago HAD such a thing! The schoolhouse is mostly old exhibits about the history of the preserve, and the nature center itself, built in 2010, is right next door, one of those amazingly cool hands-on sort of deals for the kids with stuffed animals and dioramas from the Field Museum, huge aquariums showing native fish and pond habitats, and rescue animals - owls, robins, crows, etc that found their way to the naturalists and vets who work here. I was rewarded for my wandering detour around suburban Chicago with not only the Chicago Portage stamp, but the stamp for the I&L Canal National Heritage Corridor - 2 stamps with one hot, sweaty stone of an afternoon. 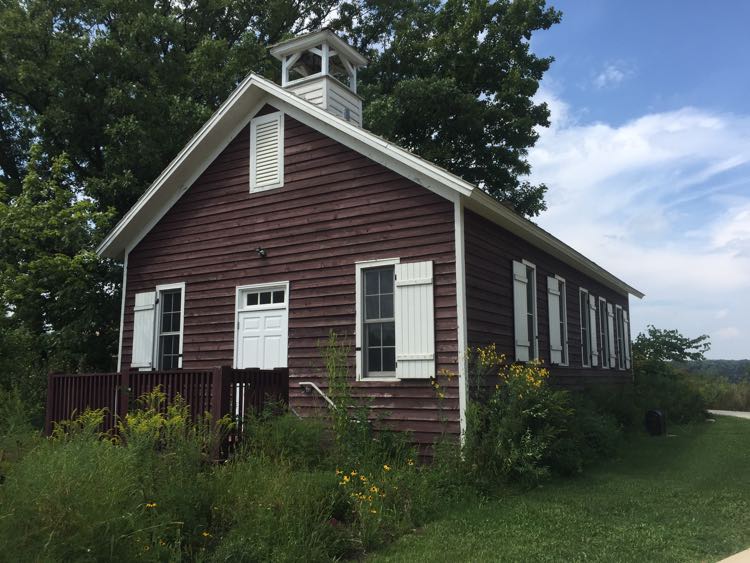 The Little Red Schoolhouse itself

Back onto the road, it is 3pm, I hydrate as much as I can, and get the hell out of town. Since rejoining I-90 north of Madison, until stopping this evening, the road has been full of trucks and cars and people, driving fast and close and aggressively in that eastern manner; figures, I’m back in the heavily populated part of the country, and the western norms of space and lassitude aren’t serving me well here. I’ve lost my edge.

I stayed on I-94 around the southern edge of Lake Michigan, stopping in at the Indiana Dunes National Lakeshore for my 3rd stamp of the day. This wasn’t a great visitors center, the lady in the gift shop was having a rough day apparently, and wanted no part of showing me where the stamp was, just a gruff “over there” and a wave of the hand. Oh well.. hope her day improved! The dunes here massive, and the constant wind made this a place for the early research of flight. They have a replica glider from one of the early pioneers hanging from the ceiling, and according to the plaque the guy who built it helped design the Wright Brothers’ powered machines later on. 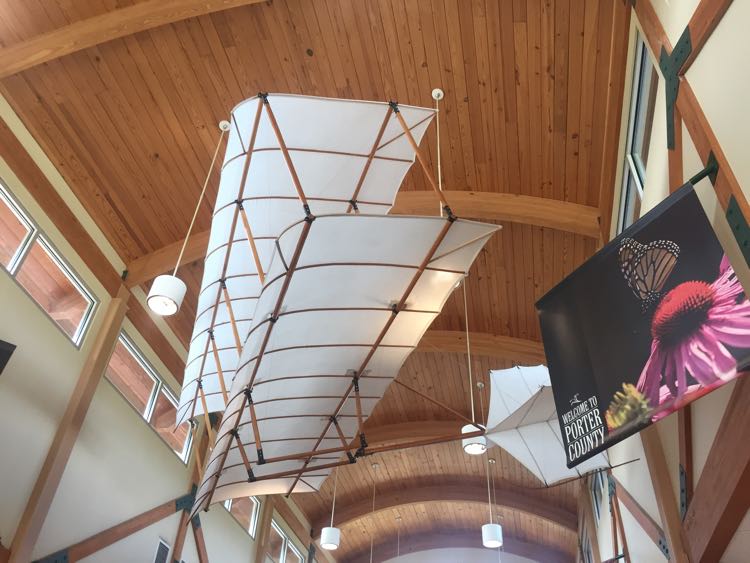 "You came in that thing? You're braver than I thought"

Had to stop frequently to rehydrate. The town of Paw Paw called my name, and I stopped at a McDonalds for 30 minutes of internet, as much cold soda and tea as I could stand, and some chicken tenders; I realized I hadn’t eaten a thing all day that wasn’t liquid except for a breakfast sammie at Starbucks, and was tummy-rumbly. As I was leaving, there was a guy who had arrived on a motorcycle about the same time as me also leaving, and his bike totally caught my eye, a sweet 1998 Triumph Thunderbird 900 (if I recall correctly) that had a near mint red finish, gorgeous fairings, and a rumble that disguised the usual triple engine whistle.. gorgeous machine. Mike was a cool guy to talk to, and we stood in the parking lot talking about bikes for a good 20-30 minutes. He’s also an off-road guy, who told me all about the history of Husqavarna before the KTM acquisition, we talked ADV bikes, I gushed about the VStrom.. we swapped internet contact info, so maybe he’ll read this someday (hi Mike!)

Back on the road.. wow, the trees east of the Mississippi sure are.. well, round. Big, leafy, bulbous canopies.. my eyes have grown accustomed to the evergreens of the PNW.

Finally got in to Jackson, MI around 7:30pm (because oh yeah, I’m in YET ANOTHER time zone and lost an hour..) and in my super cheap motel. Uncle John, Dad, you’d love this one.. Went to [a chain roadhouse] for an actual meal - salad, small steak, half a baked potato, glorious to not eat something from a gas station for once. I’m trying to eat better, honest! Came back for some bike maintenance, the chain needed some lube, and some serious adjustment.. not bad, though, for all the punishment I’ve been putting on it over the last week. 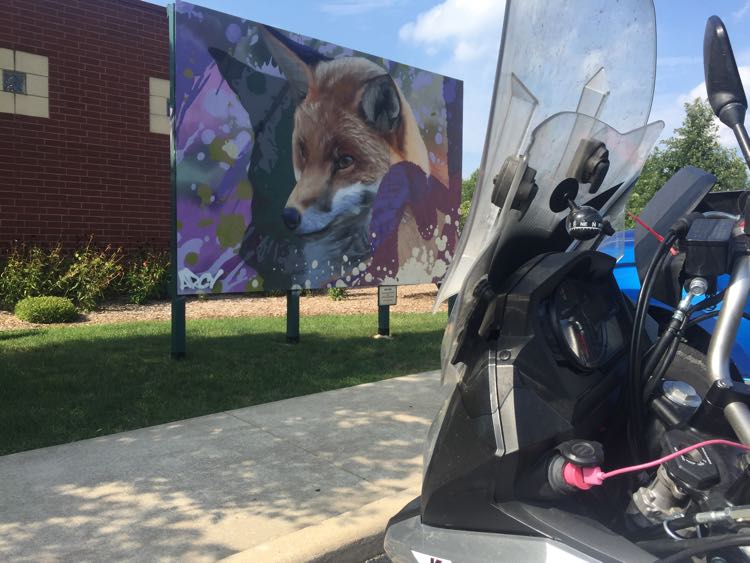